An Ancient Egyptian problem for making sandals was discussed in Unexpected Links between Egyptian and Babylonian Mathematics, Friberg. From the Egyptian problem, the Egyptian work norm for cutting sandals was 10 sandals per man*workday as 10/1. The Egyptian work norm for finishing sandals was 10 sandals per 2 man*workday as 10/2 or reduced as 5/1. The Babylonian method for the combined work norm can be hand calculated as expr (1./ ( 1./( 10./1. ) +1./(10./2. ) ) ), 3.333 pairs of sandals per man*workdays. The eTCL calculator can be loaded as 10/1 and 10/2 (reduced to 5) for the first two work norms. For very large N, the third term reduces to zero and the eTCL calculator returns 3.333 pairs. As a check on the Babylonian method, the Egyptian method or reasoning works well for the overall work norm as expr (10 pairs / 3 days) or 3.333 pairs. Ref Friberg for an exact translation of problem. 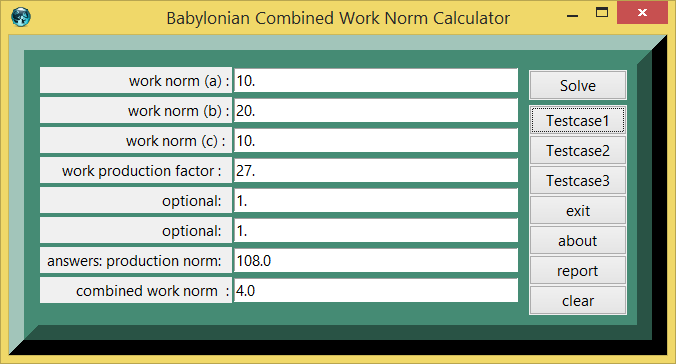 gold12Dec2018. This page is copyrighted under the TCL/TK license terms, this license . ---