gold Here is some eTCL starter code converting a slot calculator into the Over-21 game shell.

General guidelines for computer games suggest the player should win one in five times to keep interest up. Right now, the Over-21 game shell is using the first deal of two cards to estimate win for the player. The winning conditions for the Over-21 game are 1) player score greater than dealer, 2) player score greater than ~17, and 3) player score less than 22 (not busted). On the tables, the dealer could win on the second or next deal, since the dealer calls or closes the game. Most of the tables use additional decks (2-8) and pull the dealt cards, which could be implemented in the program with concat or remove list element statements. The next steps for the Over-21 game shell should be tracking the win conditions for the dealer and a button for second deal.

For testcases in a computer session, the eTCL calculator increments a new testcase number internally, eg. TC(1), TC(2) , TC(3) , TC(N). The testcase number is internal to the calculator and will not be printed until the report button is pushed for the current result numbers. The current result numbers will be cleared on the next Deal button. The command { calculate; reportx } or { calculate ; reportx; clearx } can be added or changed to report automatically

For the push buttons in the Over-21 game shell, the recommended procedure is push Testcase and fill frame to initialize the display, then push Deal. Deal displays the first 2 card hands for dealer and player, estimating the state of the game. The cards in Over-21 are picked randomly from a list of 52 cards, not pulled from the multiple decks like the tables. The face cards are counted as 10, the ace cards are counted as 11, and other cards 2-10 at face value. Where both hands total less than 16, the winner of the Over-21 game is unresolved or undeclared. If a player is 16 or higher integer over the other player (dealer), that is considered a probable win, until resolved in the next round. A clear winner is a player that scores 21 or watches the other player bust, go over 21. The internal logic is set so that dealer wins all ties.

If additional deals are necessary, push Extra_Deal to give each player one card. The extra cards are initialized at zero in the first deal and are not picked or reported until the Extra-Deal button is pushed for the Nth time. Holds are implemented foe the player only. Without hold, it is possible for both players to go over 21 on a deal. Normally at the tables, the dealer would hold ( no extra card ) on the near underside of 21 and not go out of the game with the player. Recommend pushing Report after Deal or Extra_Deal to preserve a game history, especially when multiple rounds of extra deals are played. Report allows copy and paste from console to a texteditor.

The Hold_Extra command places an experimental and one time hold of >16 on the extra deal for the player. The hold of 16 effects players hands of 16 and higher, standing or holding for one deal. Hold_Extra will have no effect on hands lower than 16 and is not used for the first deal (hold of logic 0). The hold is withdrawn on the player with the execution of the extra deal and the rule is one push, one time of hold. Just for grins, the card picked during the player hold is filed in the Report, but not added to player score. Placing simultaneous experimental holds on both dealer and player was tried, but the program logic kept locking up (and not sure how to evaluate a round where both parties pass).

The Clear command essentially nulls the Over-21 display to zeros and resets the initial variables, mostly to zero. Pushing a testcase refreshs the display with some new cards, but does not reset the internal testcase series etc.

Though rare, some Over-21 games lasted 4 or 5 deals in the testing, where small cards were picked often in the early deals. Some tables honor a special rule that a player staying in the game for 5 deals is declared a winner. Additional Nth Extra-Deals are possible until both the dealer and player exceed 21, causing end of game reported as game state 505. Since this program is under test, after the end of game (505) recommend push Report, Clear, Testcase, and Deal to be sure all variables are saved and then cleared to restart the sequence. The best hint is that if the player is a probable winner on the first deal or reaches 21, take the money and run...staying at the tables for extra deals will not make you rich.

Player has busted on first deal. What ca$h reward does player receive?

For a system of dealing 2 cards from a 52 card deck, the sample space would be factorial(52)/((factorial(2)*factorial(52-2)) or 52!/(2!*50!), reduction 1326. Some generic expressions can be developed for the Over-21 coding. The factorial procedure used below was posted by Suchenworth. Most of these TCL expressions can be pasted into the console window and square brackets may be text substituted from wiki format. 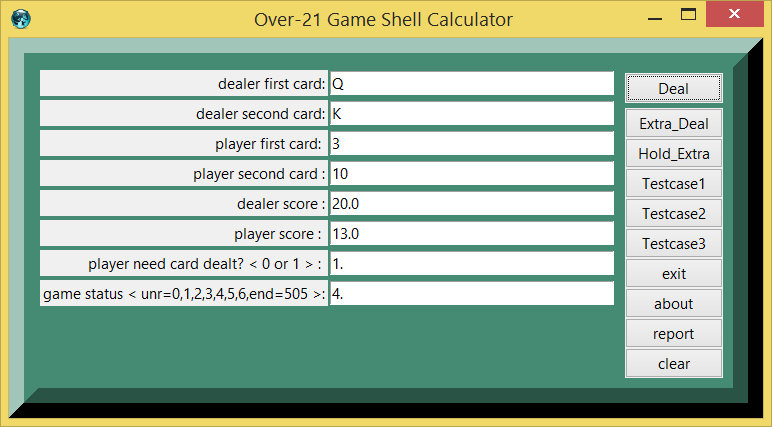