The Vedic math is primarily studied for historical purposes. The earliest Babylonian and Vedic examples of stick shadows did not use algebra notation, decimal notation, sin/cos trigonometry, or modern units, so the reader will have to bear some anachronisms in the TCL code. At least one approach for the modern reader and using modern terminology is to develop the implied algebraic equations and decimal equivalents from the text translations. Then the TCL calculator can be run over a number of testcases to validate the algebraic equations. For the examples of presenting algorithms to modern readers, the calculator shell will give results in modern decimal units. The units can be changed in the internal calculator formulas as TCL code. Any convenient and consistent output units might be used like millimeters, inches, cubits, feet, or dollars to donuts.

In planning any software, it is advisable to gather a number of testcases to check the results of the program. Here, a TCL slot calculator is being used as a testbed for the Vedic gnomon shadow ratios. The results of the testcases are estimated using the hand calculator and then checked in the slot calculator. Pseudocode and equations are developed from the hand calculations and theory. Small console programs are written to check or proof the alternate subroutines or procedures, rather than keeping the unblessed code and comment lines in the main slot calculator. Finally the improved or alternate subroutines are loaded into the slot calculator. The TCL slot calculator is effectively a shell program to input entries, retain loaded standard testcases, host calculation routines, and display results. Additional significant figures are used to check the TCL calculator, not to infer the accuracy of inputs and product reports. Four significant figures is considered sufficient for most engineering projects.

The hand techniques that the Babylonian Astronomers used to measure sky angles are not well known to the later amateurs. However, the Babylonian Astronomy diaries record the angular measurements of stars in cubits and susi. In some older tablet translations, susi are translated fingers. There are either 20 or 24 susi in a cubit depending on the era of the tablet. The clay tablets also record some calculations using the Us Babylonian unit or 4 minutes of time. An Us or one unit of the water clock is equivalent to one modern degree of angle. One cubit in the sky for celestial angles is equivalent to 2 Us or 2 degrees. Using proportions, a Babylonian susi or finger might be about (1 cubit)/(24 susi)*(2 degrees) / (1 cubit) or < expr (1./24.)*(2./1. > or 0.083 degree. 6 fingers would be < expr (1./24.)*(2./1. )*6.> or 0.5 degrees.

One possible hand technique to measure sky angles is to hold a straight edge or ruler at arms length and parallel to the to the heavens. For the modern observer, the sun or moon is convenient standard of 5 degrees across the disc. For example on a given night, if a star is observed 4 lunar discs from the moon, then the equivalent angle would be < expr 4*5. > or 20 degrees. If one takes a blank wooden ruler of about 1 foot and marks the apparent lunar disc in successions across the ruler, that ruler might give some rough measure of sky angles. With a little patience and dodging summer mosquitoes, one can further divide one or two of the successive lunar markings into fifths for a degree mark. Both the ancient Babylonian and Egyptians had both hand rulers and measuring rods marked in cubits, so this possible hand technique seems likely. Actually with a little experience, a single human finger width at arms reach is about 1 degree. Or combined finger joints of an out stretched hand against the sky can give a rough angle measurement.

For the TCL calculator, the length of any gnomon is normalized or set in the master length as 100 units or 100 centimeters. The vertical stick length or gnomon length is usually constant over the session. The units cancel out in the formula. The gnomon master length could be in inches or feet with the same units returned on the shadow.

Based on table in Early Indian Astronomy by George Abraham. The Bablylonians and Vedics probably used quarterday watches with two hour increments, but not sure how Vedics called out their hours. A watch is expr 24./4. or 6 hours long. There would be expr 6./2. or 3 segments of two hours in a watch. Reconstructing for the ideal case of noon at the equator, then day length equals night length at spring and fall equinox. 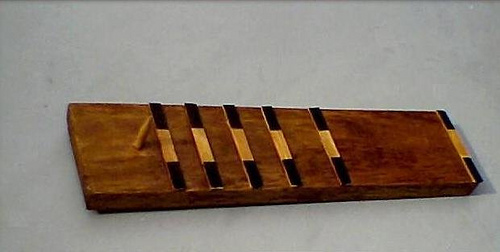