WJG (21-Nov-09) Returning to the comments made by tb above. Rather than parsing the glade file an building a gnocl script equivalent, I've followed the route of loading the glade file and registering the new widgets with the Tcl interpreter using existing gnocl library calls. To do this I've worked through the glade gui widget trees obtaining pointers, names and widget types. During the registration process, the new widgets are supplied handlers, again from the existing libraries. This means, that once loaded, the various parameters can be set and modified using the established scripting method. 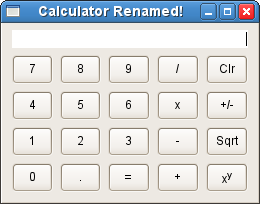 WJG (30/Nov/09) Well, the major structure for implementing glade files is in place and now, all that remains is the lengthy task of sewing glade into gnocl. Here's the current test script to show how progress is moving along.

After all this, out simple layout...