In the cuneiform math problems and coefficient lists on clay tablets, there are coefficient numbers which were used in determining the amount of materials and the daily work rates of the workers. In most cases, the math problem is how the coefficient was used in estimating materials, work rates, and math problems. One difficulty is determining the effective magnitude or power of the number coefficient in the base 60 notation. In cuneiform, numbers in base 60 are written using a relative notation. For example, 20 could represent either 20*3600,20,20/60, 20/3600, or even 1/20. The basic dimensions and final tallies were presented in the cuneiform accounts on clay tablets, but some calculations and some units were left off the tablet. At least one approach for the modern reader and using modern terminology is to develop the implied algebraic equations and decimal equivalents from the cuneiform numbers. Then the eTCL calculator can be run over a number of testcases to validate the algebraic equations.

The Babylonian tablets VAT8587 and YBC6295 have lines like operation N1 N2, here N2 was a carry over value or extra column2. The instructions place N2 as next or "under" the operation N1, which may be saving N2 as a second set of factors. The trailing edge reciprocal algorithm on this wiki has this feature also. The Babylonian tablets VAT8587 and YBC6295 are demonstrating factorization with the rule of eight. Certainly, factorization could reduce a large cube_root to an easier value to handle. 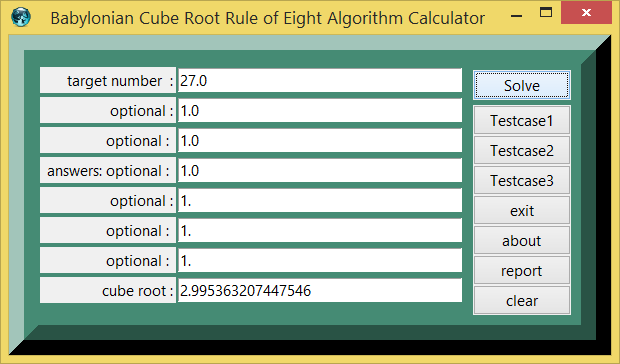