In the cuneiform math problems and coefficient lists on clay tablets, there are coefficient numbers which were used in determining the amount of materials and the daily work rates of the workers. In most cases, the math problem is how the coefficient was used in estimating materials, work rates, and math problems. One difficulty is determining the effective magnitude or power of the number coefficient in the base 60 notation. In cuneiform, numbers in base 60 are written using a relative notation. For example, 20 could represent either 20*3600,20,20/60, 20/3600, or even 1/20. The basic dimensions and final tallies were presented in the cuneiform accounts on clay tablets, but some calculations, some units, and some problem answers (aw shucks!) were left off the tablet. Successive or iterated math solutions are called algorithms and the Babylonian methods are some of the earliest algorithms documented circa 1600 BCE. The TCL procedures are descendants of this idea. The Babylonians did not use algebra notation, decimal notation, or modern units, so the reader will have to bear some anachronisms in the TCL code. At least one approach for the modern reader and using modern terminology is to develop the implied algebraic equations and decimal equivalents from the cuneiform numbers. Then the TCL calculator can be run over a number of testcases to validate the algebraic equations.

The tablet AO8862 from Larsa is calculating shares for four men on a complex or combined job. The tablet AO8862 is almost a sui generis, but there are later tablets from Umma in UR3 that round out some of the Sumerian customs. An overseer would give the scribe small hand tablets or oral instructions. The scribe would figure the wages or shares of the workers and tally the amounts from the customary work quotas. The usual low skilled pay was two bowls of cracked barley per man. Uncommon, but half and quarter days are found in the accounts. Continuing with the scenario, a half day would be one bowl and a quarter day would be 1/2 bowl. However, AO8862 is figuring the pay to 1/3600 of a bowl as volume unit. Barley was not usually measured to 1/3600 bowl (bowl = liter), but some water weights and time measures in the water clocks may approach this precision. Not sure that plausible hours, double hours, or quarter days as Sumerian time units could be reduced to the {7 11 13 14} multiple ratio given. With the calculator, the 12 hours of the Sumerian workday was portioned with {7 11 13 14} multiple ratio and the decimal hours were { 1.8667 2.9333 3.4667 3.7333}. The Sumerians used other units of time and the double hours in decimal units were { 0.9333 1.4667 1.7333 1.8667}. In many cases the multiple ratio can be reduced in the calculator and give the same answer. For example, 20 portioned with { 4 4 4 4 } gives the same result in the calculator as the reduced { 2 2 2 2 }. However, 3 ratios in sequence {7 11 13 14} are prime and can not be reduced to smaller whole numbers. It is possible the false shares algorithm is being tested or demonstrated in AO8862 that the algorithm will work with prime numbers and return accurate pay. Some of the Babylonian algorithms did not work with prime numbers (irregular in base_60) or had to be adapted-supplemented because the prime numbers could not be factored.

The tablet AO8862 from Larsa was rated at 1739/1749 BCE to (as recent as) 1720 BCE, sophisticated but near end of Larsa math tradition. Concept for sum of sequence(s) would be necessary for false shares algorithm, whether terms multiplied by integer or not in the algorithm. At least in the available problems, the published sequences have 4 to 5 terms. Sum of sequences has many implications in history of math.

Rabbi Abraham Ibn Ezra (1140 CE, born Tudela, Navarre,(or modern)Spain) has an interesting discussion on proportional division and other "just" divisions under Jewish law in the Talmud and commentaries. The available clay tablets on the false shares method is roughly from 1800 to 1500 BCE, but Rabbi Ibn Ezra expounds on proportional division from some "gentile" or "foreign" source. The Babylonian false share methods did not have a free ride, but were condemned by several sources in mainstream Talmudist and Christian traditions. It would be interesting to include or compare Talmudist division in the calculator. The calculator handles simple cases of Islamic inheritance as it stands. 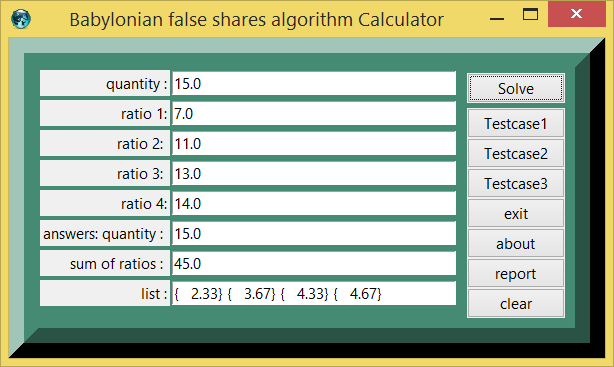