License: GPL v2 or (at your option) any later version. 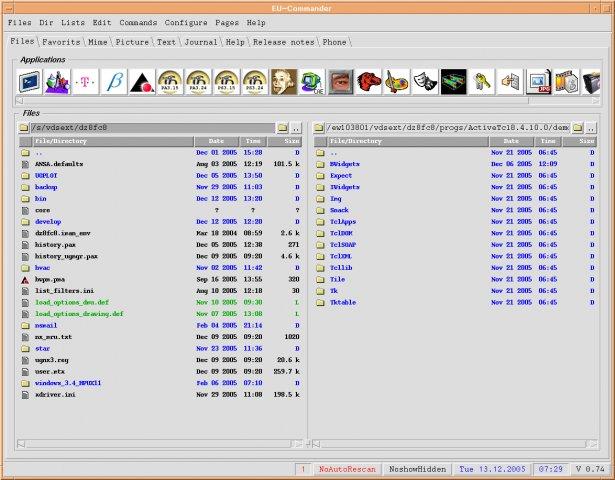 SEH Looks nice! A good cross-platform tcl file browser has been needed for a long time. Can you drag/drop or copy/paste files and directories between window panes?

schlenk I don't think you can yet. (The author asked how to implement it here [L1 ] )

AM It certainly looks impressive :) I guess the easiest way to implement drag-and-drop would be to use BWidget (or look for clues in that package).

EU Thank you very much ;) At the moment I don't have the time to implement D'n'D, but the Commander is easy to use with the function keys or the file menu (right mouse button). I use it this way every day at work !

EU I know these problems on windows, but maybe you can try to turn off the 'AutoRescan' !?

EU As I said before, me and my colleaques use the Commander every day at work on HP-UX 11 and it works very good. When running under Linux I also have good experiences. But on the notebook (WinXP) I don't like to work with the Commander, everything is very slow, on the desktop (WinXP) it's faster !? I think it's a graphics problem, but I'm not sure.

EU I think I found the problem !? There were too many calls of 'directory rescan' after each action ! I fixed this bug and as far as I can say as an 'objective' user it's much faster now :-) (especially under Windows). This new version (V 0.84) will be published in a few days (sf.net). I'm just working on the implementation of 'tar' handling.

EU I have just installed the new ActiveTcl (8.4.15). There is a 'tremendous' speedup in working with the EU-Commander (V 0.84). Even loading large pictures is very fast now. With the new version I will also add the menu item 'Pages' to turn on/off certain pages (this was already implemented for the unix versions). Please give me some feedback.

MHo: Personally I find it confusing if the messagebox position depends on the mouse position, but that's only one opinion among ten million others...

MHo, 2008-02-22 : Working with v0.89, at the moment on w2k. Klicking on Help in the menubar immediately crashes the program. Klicking on pages first, then moving to the right works ok. Another one: which file can I leave out if I want to create a kind of "minimal version" of EU-Commander? Can the addons folder safely be deleted?

EU, 2008-02-22 : I never had problems with 'Help', but .... ? For the absolute minimum you need just four files : 'eu-comm.tcl', 'files.tcl', 'favorite.tcl' and 'mime.tcl', the rest is not necessary to run the Commander. I just did some tests with V0.92 (minimum version) on Vista and everthing worked fine (it's getting better and better). I will put V0.92 to SF this weekend, so maybe you can test this version (with multithreading if you want).

tar handling: It is possible to work with 'vfs::tar' (EU-Commander option '-vfs', but there are still some bugs !), but I have some problems with this package (see [L2 ])

MHo, 2008-06-18: Me again, just doing a quick test of v0.96. Klicking on the Mime-Tab gives an empty, constantly flickering screen. Further interaction with the program failed, and EU could not be exited (had to kill wish84.exe via taskmgr). This is reproducable. Each time I klick on Mime or Favorites, the screen starts flickering, the wi ndow become destroyed....

EU, 2008-09-12: I think you're working under Windows ? There is a problem with the 'ScrolledWindow', which I use for the buttons row. The scollbars should appear if necessary, but sometimes it doesn't work correctly (infinite loop : ON-OFF-ON-OFF...., that's the flickering !)!? The menu item 'Configure - Window problem' works for all ScrolledWindows, except for the Favorite's and Mime's. I will fix this in V0.97 ! (Coming up soon) MHo: It work's!!! Is it planned to deploy EU-Commander as a starkit (or starpack) sometimes?

EU, 2008-09-17: Thank you for the info. As soon as I know how to create a starkit (starpack), I will try to create it!? For the moment I have already collected all the required packages within a EU-Commander subdirectory 'packages' to start the Commander on a 'standard tcl machine' without any additional installed packages. MHo: I could create a starkit/pack for you, If I will have access to all the required files. EU: Can we go on via Email (and in german) ? [email protected]

MHo, 2009-09-24: I got an error message stating that there's no tar.exe found. Indeed, there is no such tar.exe in my search path. Despite of this I want to use eu-commander...

EU, 2009-09-25: I think, I don't understand the problem. There is a check for 'tar' and 'gzip'. If one or both files are missing a message window (only for info) will come up, but even if the files are missing the Commander should work (with reduced capabilities of course !). I will try this at home, but maybe there is some other bug !?

MHo: Maybe. After the message, EU-Commander terminates immediately. However, if I put a tar.exe in my path, the program starts. I got some other errors then which need to be documented.... just a matter of time...

EU, 2009-09-26: At least I fixed the problem with the missing 'tar' and/or 'gzip'. I missed to catch the error when looking for the files in the Commander's subdirectory 'packages'.

EU, 2009-11-20: Now I know what's happening with the marker. If 'AutoRescan' is active, after a new directory rescan the marker is set to the top. Turn off 'AutoRescan' and try again. I will fix that in an upcoming version.