There will be a Tcl/Tk developers room at FOSDEM 2004

EB: Brussels is really near for me, and I'd be happy to meet TCT members.

TV: Most probably I'll be going, DV as they say (read: when car and friend finances don't break down), it might be possible to bring another person from the line amsterdam/brussels/louvain. I may well be doing video. TV '(feb 22)' I and the owner of the video camera did video of most tcl lectures, though admittedly not all profi or complete. According to FOSDEM rule no commercial anything of the conference should be, so probably no CD's, too, except for some requests I'm sure (without profit, I'll see). Web versions will appear. 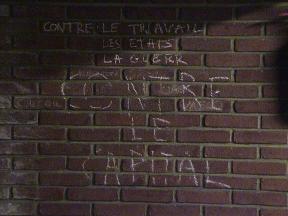 TV (Feb 24, 2004) Videos are all available (in wmf) on http://www.theover.org/Fosdem/ the upload speed of the server is good enough for immedeate (unbuffered) viewing of one person at the time, I'll see how that all develops in practice...

rmax: I'll be there!

DKF: I'd love to be there too. I'm up to my eyeballs in work right now though, so booking anything is massively down the priority list. It should slacken off sometime in early Feb though so FOSDEM is quite possible.

PBA: I'll be there. What about a pair of beers in the evening in Brussels with some fine lunch ?

US: I'll probably be there for a day.

AM: I will be there - the two days

Peter Spjuth : Will be there. I have extra beds in my hotel room, and would like to cut costs, so if anyone wants to share, let me know.

Jeff Hobbs: will be there, staying at the Novotel Centre Tour Noire (main conference hotel) from Feb 12-23 (Thursday night - Monday morning). I haven't finalized presentation plans - if you really want to hear about something, tell me soon (before Feb 10).

NEM would like to go. Just need to check finances...

RS planned to go too, but has other things to do that weekend :(

DKF: OK, I'm now booked in. See everyone there!

CF: I'll be there. Visit [L2 ] for information on the schedule and Friday Feeding Frenzy.

jcw: will attend on Sunday.

dkf: rmax did a fun talk where he wrote a simple chat server while the audience wrote chat clients.

What we learned, and how to improve on things for the next time (FOSDEM 2005), or other shows.

chrstphrchvz 2019-01-25 repaired some links that were broken