HTC (High Tech Computers) is an electronics firm in Taiwan. The "Magician" is a cellphone/PDA PocketPC with very small dimensions (2.8" screen diagonal, while having the same 240x320 pixels in 64K colors). ("the same" as what?) RS: other PocketPCs 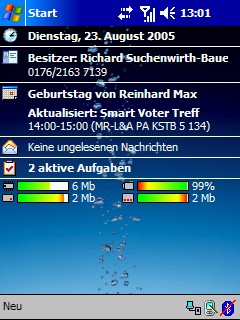 The Magician is typically sold branded by mobile phone companies:

RS bought an XDA mini on July 11, 2005, and so far is pretty happy with it. Tcl, and all the apps and games as announced on the PocketPC page, run well on it - it was only necessary to increase some of the font sizes, as the screen is only half as big as the iPaq's. - 2005-08-11: A month later I have to notice that O2 Germany lowered the price to 130EUR (from the 200EUR that I paid)... 2005-08-16: At a family reunion, I had to demonstrate it to my little nephews and nieces. Games like Memory 2 or Nine men morris were well received, as was the animation trains3.tcl - on Tclkit Mobile 3, so ovals would show. I mentioned Toy cars, and of course the boys wanted to see it. So I pointed IE to fetch, via GPRS, wsp://wiki.tcl.tk/toy%20cars (my phone plan disallows use of HTTP, but IE brings the pages well enough if masqueraded as WSP :) Select all - Copy, paste into an empty .txt document - and frustration: all line breaks had gone. And they do matter in Tcl... So I inserted newlines wherever I thought they belonged, but still missed some. At that time, everybody went for an afternoon walk, so I joined, but every now and then I would stand still, examine an error message, fix it in the source... and by the time we were back in the house, Toy cars were up and running on the little thing as well. Hooray for mobile computing - and Tcl :)

With O2 (Germany) GPRS/WAP tariff, one cannot use http: URLs. But many of them work by just changing the protocol name to wsp: Then the 5 EUR/month flat rate very soon becomes worth it.

RLH - That is a nifty looking device. I wish they had a straight PDA version. - RS Just take out the SIM card to be unconnected :)