This page is under development. Comments are welcome, but please load any comments in the comments section at the bottom of the page. Please include your wiki MONIKER and date in your comment with the same courtesy that I will give you. Aside from your courtesy, your wiki MONIKER and date as a signature and minimal good faith of any internet post are the rules of this TCL-WIKI. Its very hard to reply reasonably without some background of the correspondent on his WIKI bio page. Thanks,gold

gold Here is some TCL starter code on a calculator for human language root words. The impetus for these calculations was checking some references in Sumerian and cuneiform mathematics. Most of the testcases involve experiments or models, using assumptions and rules of thumb.

The original formulas were developed by Morris Swadesh in the changes of native American languages, published 1950 to 1955. Swadesh published a lexical constant fraction of 0.86 in 1955, restating that 86% of original root words should remain in a source language after 1000 years. In the various papers, Swadesh used selected word lists of 215, 200, and 100 root words. The original formula was N(t) = N(0)*exp(-lambda*t). In TCL notation, the remaining root words N2= [*kay [/ N1 [exp [/ $t 1000.]]]]], where N1 is the original set of root words, 1000. years for millennium, and t is the time in years. The constant kay equals [* [/ 86. 200.] [exp 1. ]]] or 1.16886, where [exp 1. ]]] is familiar natural number 2.718. As a rule of thumb, a second language with different roots of 50 percent is not easily understandable from a first or source language, and probably would be considered a second language. There might be 5 percent error in comparison lists of two languages, so the 50% criterion from the rule of thumb can be relaxed somewhat. In modeling a descendant language from a source language, the criterion is postulated that a language with more than 46 percent of root words remaining is a descendant of the source language.

A more sophisticated analysis of the F&G separation indicated the common roots of F&G at fraction 0.351 and 35.1 percentage. One error source was the limited vocabulary lists of 200 or so, which introduce a quantization error of about [- 1 [/66 67]]] or 1 percent for each word in error. From the 200 word list tallies, each word in error means that the separation formula estimates about 50 years per word in error. Overall, there was about a 15 percent error in the linguistic calculations. Consequently, the time of separation between F&G was between 3400 and 4200 years BP. One historical event that took place near the F&G separation was the volcanic eruption of the island of Thera in 1475 BCE or 3489 BP. Other papers suggest the Minoan eruption of Thera took place near 1628 BCE based on tree rings and near 1613-1660 BCE based on carbon dating. It has been speculated that the volcanic dust, crop failures, and poor grassland yields damaged the ecology of the Middle East and triggered one of the Celtic or Indo-European invasions of Europe.

Continuing with the eTCL calculator on the separation of French and German, one loads 200 root words for time zero and 66 words as remaining roots. The solved ratio would be [/ 66 200] or 0.33 as above for the common roots of French and German. The eTCL notation for years separation would be set separation [* 1000. [/ [log $newratio ]]] [* 2. [log .86 ]]]]] years BP. This function for separation was loaded into the calculation routine, but can be pasted into the eTCL console. The fraction 0.33 estimated the years of separation as 3675 before present or 1661 BCE +-200 years. For another bound on the F&G separation, the fraction 0.351 or 70/200 was returned in the separation formula as 3480 years BP or 1466 BCE , +-200 years. While quantization error was not the only error, the quantization error on the two calculations can be estimated as [* 50. [70-66]]] or 200 years. This added separation function shows how the calculator can be modified, but the separation function should be handled carefully since the interpretation and derivation of the separation function is a little different.

Ironically, the first estimate for the F&G separation at 1661 BCE +-200 years was in close agreement within the bounds of tree ring estimates and carbon 14 dates. For the first estimate, the reported error of +-200 years was based on the 200 word lists. The analysis might point out that reducing the wordlist from 200 to 100 root words substantially increases the quantization error. The quantization error from a hundred word list would be [- 1 [/ 33 34]]] , 3 percent quantization error for each word. Continuing with 4 words in error, the total error on the F&G problem would be 12 percent (+-400 years) using the 100 word list. The conclusion is that human languages change over the years. If there are N1 number of roots in the source language, there will be some smaller fraction N2 left over the years.

Notes on 3 Keltic Invasions of Europe

Question?: Do you have date or century info on the Kelt invasions of Europe. Possibly more than one invasion? One invasion by Kelts was apparently triggered by the volcanic destruction of Thera in 1475 BCE, better known as Atlantis?

1) The first invasions of Europe by one group of ancestors of the Kelts took place already between 5000 BC and 4500 BC from the East Steppes towards the West Steppe and into Western Europe.The Greek line Kelts that you talk about would have been Y-DNA R1b-L23 (Copper and Bronze Age Maykop) etc. bringing with them Y-DNA J2a people from Greece and the Caucasus during the Neolithic. The second invasion including ongoing movement inside Europe already may be accounted with the R1b-L21 (Celt-Gael) descendants in roughly 2000 BCE to 500 CE. The R1b-L21 (Celt-Gael) descendants moved into Ireland and other British parts between 2000 BC and 1000 BC-500 AD. The other R1b-P312 old strains they found in Scotland were from Celtic families who went straight over to Britain in 2300-1200 BC. The 3rd group of Celts were G2a3 people who came from the Caucasus and G2a4 European Neolithics and were later part of the society created by I2a and R1b Celts at Hallstatt, (1200 BC). Archeological remains at Hallstatt (1200 BC) appears to be closest to cited volcanic activity on island of Thera and within expected error bounds. Invasion across the Bosperous straits would have been problematic for these Kelts in 1475 BCE, so the Macedonia-Balkans area seems plausible as a starting point and land route for the third Keltic group into Europe. Believe the human genetic research adds considerable depth to the human root word findings.

2) In human genetics, Haplogroup R1b is the most frequently occurring Y-chromosome haplogroup in Western Europe, Bashkortostan 3 and in parts of sub-Saharan Central Africa (for example around Chad and Cameroon). R1b is also present at lower frequencies throughout Eastern Europe, Western Asia, Central Asia, parts of North Africa.Single-Nucleotide Polymorphisms (SNPs) are very stables, mutating rarely. Most European R1b paternal lineages are related within the last several thousand years. That means that R1b STR based haplotypes often look alike. The most common pattern of Y STRs is the Western Atlantic Modal Haplotype (WAMH). Most R1b people match several components of it. It is just a remnant of the fact we are closely related. SNPs differentiate the branches of R1b’s descendants tree. C1 in Europe was the oldest haplogroup there. C1 displaced by Y-DNA I2 men in Paleo or Ice Age when this started. C1 still left further east in East Europe, but there C1, H2 were displaced by the Ind-European R1a groups.

3) One group of Greeks who became Kelts entered Ireland at the same time as the R1b-L23 people and R1b-L21 group. The Greek group 1 Kelts were Y-DNA J2a3b or something. The other group was a J2b. There are more J2a types left in Britain than the J2b group of Greeks. Very small % today. The main group of Kelts who invaded Europe were origianlly actually ancestors of the Kelts - R1b - R1b-P312 . A small Sarmatian type group Cimmerians were R1b-L23. Some Greeks were Trojan R1a (Slav-like) and another Greek group was their tribute clan E1b1 from south Greece.

4) The 3rd group of Celts were G2a3 people who came from the Caucasus and G2a4 European Neolithics and were later part of the society created by I2a and R1b Celts at Hallstatt, (1200 BC). The original leaders of the invading Keltic groups from Greece and the Steppe into Europe were R1b. There were some I2a Balkan leaders with them from the Balkans. There were also local I2a people in West Europe already who were Mesolithic henge people

5) R1b is the paternal branch of the human family tree marked by the mutation M343+. R1b includes all R-M269 people. If you are R1b of any type, including predicted M343+, P25+, M269+ or of any descendant SNP such as U106+, P312+, L21+, DF27+, U152+, S1194+, Z2103+ or V88+ But there were two mutations one for red hair and one for blonde hair in this group and two mutations of autosomal DNA carried by the R1a group. R1a was already in parts of the Balkans by then (Neolithic late - 5000 BC) and the first R1b groups to be inEurope were R1b-DF types. These were spin offs, like R1b-V88 from the original Haplogroup R1b (R-M343), (Bashkir)Greco-Anatolian, Italic, Celtic and Germanic branches of the Indo-European speakers. France and West Europe in Paleolithic and Mesolithic inhabited by C1 (very few left), H2 (few left), G2a4 (Neolithic hunter-farmers-with axe technology ) and some I2a people.

6) The Greek line Kelts that you talk about would have been Y-DNA R1b-L23 (Copper and Bronze Age Maykop) etc. bringing with them Y-DNA J2a people from Greece and the Caucasus during the Neolithic.

7) The oldest group of Britons were similar to the old Irish Mesolithic group of 7000 BC - I2a (men) . The Viking groups who later invaded the parts of Caithness and Sutherland in 700-800 AD were I1a. I1a is the old Skandza group of South Sweden and spread into the Balkans. The R1b-L21 (Celt-Gael) descendants moved into Ireland and other British parts between 2000 BC and 1000 BC-500 AD. The other R1b-P312 old strains they found in Scotland were from Celtic families who went straight over to Britain in 2300-1200 BC.

8) R1b-P312 had about 3 descendant mutations R1b-L51- which later had another mutation to R1b- L21 (Gaels)- . The cousin mutation of the P312 was a branch of R1b-U106 which became ancestors of some North Sea Germanic (Angles). Angles had two groups. One group was an unrelated Megalomose Culture People Y-DNA I1a (Cro-Magnons with a bump on top of the head ). The second group of Angles were from Indo-European stock [R1b-U106). The one group of Franks were R1b-U105.

9) Invasion from the steppe, Caucasus and Anatolia by a Y-DNA R1b group R1b-M269 and their women they took with them into where modern Belarus and Ukraine are. There were already earlier groups there (a Proto-Slavic R1a paternal group) when R1b arrived there. The mutation for the North Atlantid Keltid Y chromosome's ancestor was taking place within a group that was an ancestor of the Italic-Celtic-Germanic R1b bloodstrains - which became R1b-P312. End of genetic content. 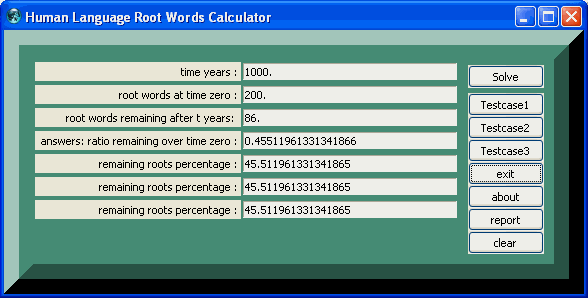 For testcases in a computer session, the TCL calculator increments a new testcase number internally, eg. TC(1), TC(2) , TC(3) , TC(N). The testcase number is internal to the calculator and will not be printed until the report button is pushed for the current result numbers (which numbers will be cleared on the next solve button.) The command { calculate; reportx } or { calculate ; reportx; clearx } can be added or changed to report automatically. Another wrinkle would be to print out the current text, delimiters, and numbers in a TCL wiki style table as