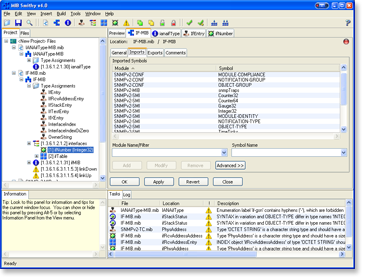 Vince asks how you got that red 'close' dot in the interior of this window, and what bindings you use on it (does it show a cross when the mouse goes over it?)...?

MAK - It shows the X when you mouse over it, yes. I kind of cheated: I took two screen shots of a window with and without the mouse over the actual window's close dot, trimmed them up, and saved them as GIFs with transparency. The widget is a ttk::label widget with -image set to whichever of the two images needs to be displayed. (I can get away with using a label because it's never disabled, unlike most of the toolbar buttons - a Tk (not tile) Aqua bug causes disabled label images to turn into white rectangles.) I bind <Enter> and <Leave> to switch the image (although there's probably a more Tile-appropriate way to do it with states) and <ButtonRelease-1> to invoke the actual "Close" button you also see.

Right now it uses the same graphic regardless of platform, though. Also, I'm in the middle of drawing all new icons, so you kind of see a mix of old icons and new in the above that aren't released yet (along with the Mac style "disclosure triangles" rather than [+]/[-], which also isn't in the release version yet).

Vince -- Thanks for the explanation! It might be very helpful to others if you could release your 'closebox' code as a tile add-on package with appropriate graphics etc. E.g., as a megawidget 'closebox $tkwin ?-command callback?' which creates and returns the given platform-specific closebox widget and arranges for 'callback' to be called when it is eventually clicked on.