Heavy usage of ML on Windows

Here's an example of what ML v1.26c looks like on my laptop. Just keep in mind that I've reduced the width of the windows (of both versions of ML) so you can see how much memory they're both using. My screen looks like this (sort of): 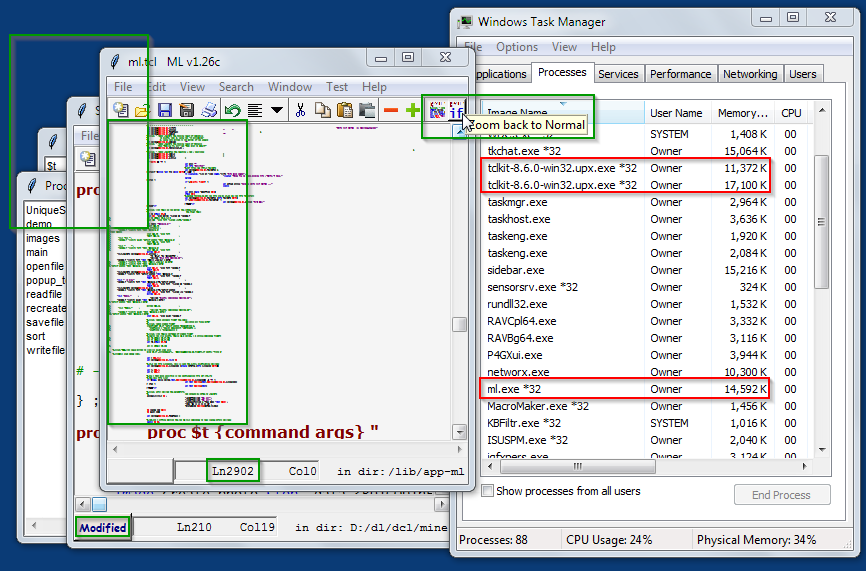 In the upper right green box, you can see that I'm running two versions of ML simultaneously. Why am I doing that? Because it's real good to look at other programs that you like, or more exactly, from which to copy.

What is important (which is hightlighted in red), is how much memory both copies are using. Notice that one (the later version of tclkit, or the second on in the list) says it's using 17,100K which means about 17Meg of memory. If you look at the second to lowest green box, you'll see that this program is kind of large, almost 3000 lines. Why is the text so small on that one? That's because I've hit the "Zoom WAY out" button, which is what I like to find the proc I'm looking for. Can you Zoom back in? Yes you can. See the green box on the right. It says "Zoom back to Normal".

How many programs are you looking at? Well, over 35. Have a look at the first version I'm running (the later version of tclkit, or the second on in the list). Here's a screen shot of that one: 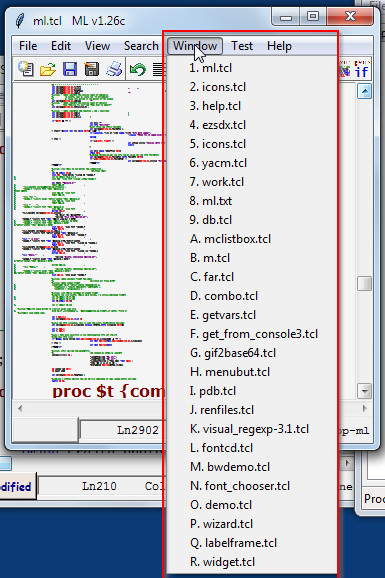 That means I have 27 files open in that copy. You can see what I'm editting in that version. The other version, which is a Windows starpack, is called "ml.exe" says it's using 14,592k, or under 15Meg. Which files do you have open in that copy? Here's a screenshot of that copy: 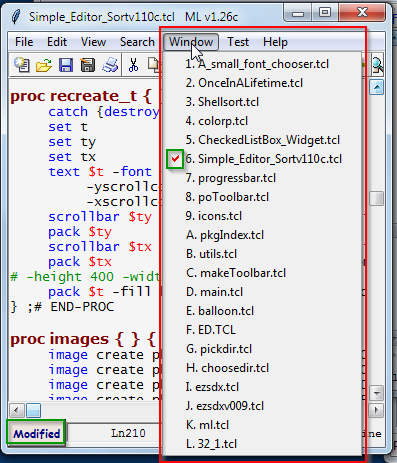 That means I have 21 files open in that copy. Notice that I do have this one that I'm looking at has been "Modified" (highligted in green), and it does show a red checkmark next to the file(s) that have been Modified (highligted in green). It is a button, so if I click on it, it does save it.

How long can you run two (or more) copies of ML? I've been running those two since I last rebooted (when Windows had to, to install some updates), which was at least a week ago. That's why I like ML so much. It's kind of important to me that it doesn't crash.

What functions do you use the most, other than typing? Well, I mostly use the functions available on the right of the toolbar, and the duplicate lines function. These are shown below. 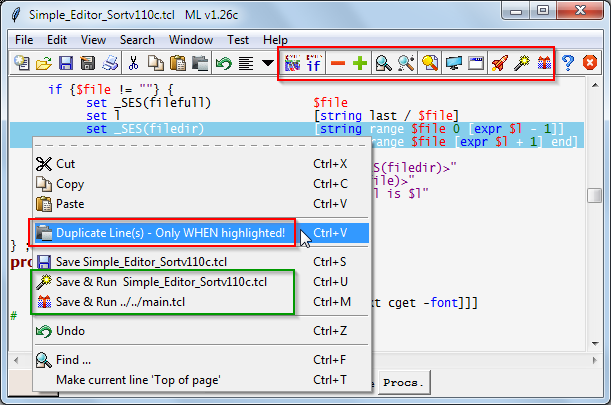