Richard Suchenwirth 2002-12-04: NAND means "not AND". By popular demand, here are some codelets to demonstrate how all Boolean operations can be expressed in terms of the single NAND operator, which returns true if not both his two inputs are true (NOR would have done equally well). We have Boolean operators in expr, so here goes:}

A very different idea, having nothing to do with NAND as elementary function, but I like it because it "implements" Boolean functions very intuitively, by just giving their truth table for look-up at runtime:

!! is a cute little Booleanizer (thanks KPV on Toggling a Boolean variable!)

TV: Always good to have a page on the thing that can be proven to be a basic building block of pretty much the whole universe of computers! For digital designers with some historical perspective (and sense), NANDs are pieces of electronics that have in minimal form 3 pins each, and are represented by 'iron' symbols, where the output has an extra circle, which indicates it is not an AND but a NAND (with inverted output). Inverters are more fun, because one cannot construct something inverting with gates that do not invert. Otherwise, mathematically one can construct ANY logical function from ANY logical building blocks that has two inputs and inverts and does something like an and or or function. 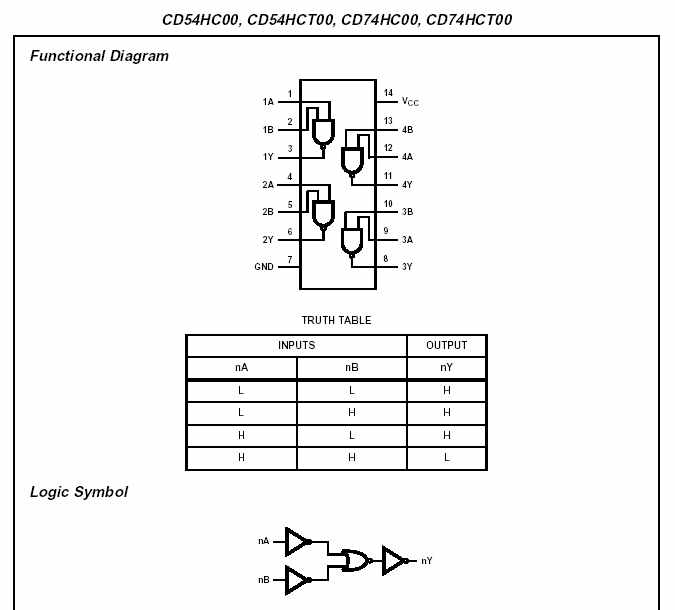 Not only can NAND be used to construct all truth functions, it can also be taken as the sole logical connective in an axiomatization of the propositional calculus. [Mendelson, ISBN 0-534-06624-0], following [J.G. Nicod: A reduction in the number of primitive propositions in logic, Proc. Camb. Phil. Soc. 19 (1917), 32–41] and denoting NAND by |, give the interference rule

(cf. modus ponens, which would be A, A⇒B ⊢ B in the same notation) and the axiom schema

as being sufficient for deriving any tautology.

As an example of this, the easiest instance of that axiom schema is the one where all occurrencies of formula variables (A–E) are set to the same logical variable x:

The easy way to compute that is to use string map:

In order to derive something from that formula of all x's, it is necessary to find another instance of the axiom schema which matches it well enough for the interference rule to apply. Since that all x's formula is the shortest of all axioms, it'll have to be the A in the interference rule. The axiom used as A|(B|C) must furthermore have exactly the all x's formula as the left operand of the outermost |, which forces values for variables A, B, and C in the schema; the possible axioms are thus by

computed to be on the form

so any formula on that form is thus a theorem of this propositional calculus, and thus a tautology.

As usual with compact axiomatizations of a known theory however, it takes quite some work to find a sequence of axiom combinations that produce the theorems that express the usual laws of logic…

Ampheck
refers to either one of the NAND or NNOR operators

Boolean Logic
a course proof on how any logical function can be constructed, also from NANDs

Laws of Form
shows a model of Boolean arithmetics with two operators, one of them being the empty string, however...