Here is my initial version of Primitive Directory Browser, which is currently v1.0a, which does work well on Windows: 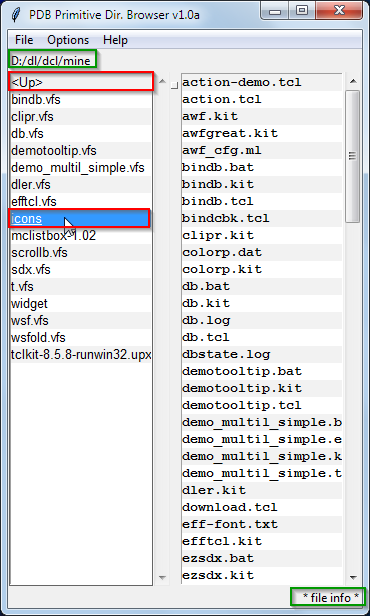 It does have a menu (with added icons), a panedwindow style (which you can switch between vertical and horizontal). It does start in vertical mode.

What you can do is change to subdirectories (by double-left-clicking on the desired subdirectory), and it does load the names of all the files that are in that directory. That situation is depicted above (highlighted in red, with the mouse cursor).

Notice that what you can do, alternatively, is to click on the other box, highlighted in red, which contains the '<Up>' as an item in the list (of subfolders). That means that you want to go UP, exactly one level. If you did that you would be requesting to move to 'D:/dl/dcl' folder. That's all you can do, relatively, to the current folder (highlighted in green, above the '<Up>' item in the list), which does show the current folder you are looking at.

What's with the other green box, on the lower right of the screen? Why does it say '* file info *'?

That's for the other window pane of the panedwindow, namely the filelist, of whatever folder you are in. That shows you a sorted list of filenames. You can use the mouse to click on the filelist, to get that window pane active. Once you've done that, it will show this: 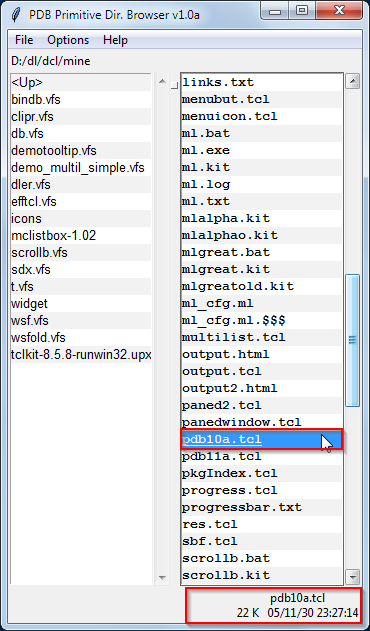 Notice I've cheated a bit, and used the mousewheel, to scroll down a little (yes it does work!), and picked the file named 'pdbv10a.tcl'. Now, it shows me the file stats in that red box, below the other one. Once you done that, then try using the 'cursor-up' or 'cursor-down' keys. It will change the filestats, based on the currently selected one in the filelist.

How do I jump to another folder, when I'm down deep in another's subfolder?

Good question. You can do that by clicking on the file menu, and select the 'Folders...' choice, like this:

That will bring up a screen (which uses tk_chooseDirectory), which, on windows, looks like this. 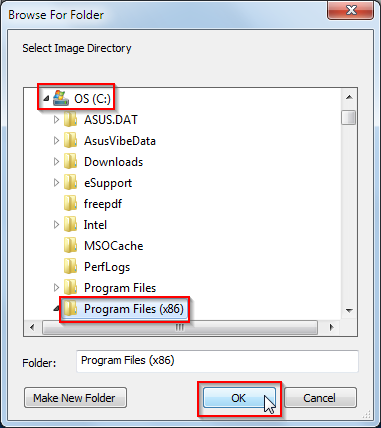 If you've found the folder you want to 'jump to', PDB (Primitive Directory Browser) will jump to that, and load the filelist. I'll let you try it.

Notice that it does let you switch folders, and switch drives!

On the information screen, it does say 'That's all it does, being primitive.'

I do hope you like it (and tried it in 'horizontal' mode).

The code is <here> , which is about 22k. You can also download it from my site, in <zipped> format, which makes it smaller, under 8k, as long as you have a good de-zipper.

I have lots of plans to make it more useful, but thought, jeeze, there may be someone else who's trying to write a Primitive Directory Browser, which is why I released it under the GNU General Public License, version 2.

This program was originally written in response to Scrolled listbox widget -Display a list, pick any item then perform some follow up action., which was a great start. Although it is a real simple list (one column per row), not a table, nor multicolumn list (where you can store more than one column, per row).

I'm still investigating them. They are more difficult to get them working, when you're using tclkitN.N.win32.exe (which is a tclkit, and does not have all of tcl in there, to keep them smaller).

Any help, or suggestions on how to do that would be welcome.

Also, I'd like to know if anyone can run it on another machine, with a different OS (like Mac or Unix). I think it should work on those.

I think that's what is required on Windows, is the commands "console show" and "console hide", to make the console happen. I could try to make sure that it only does those commands, when it's running on Windows (how about Mac?).

So far, no one has tried it on Mac, that I know of.