Tcl Static Prime (TSP) is an experimental compiler for the Tcl language that produces C or Java code, which is then compiled on-the-fly during execution of a Tcl program. TSP is a currently a work-in-progress; its performance varies greatly depending the Tcl commands that are currently compiled.

TSP language restrictions include restricting all arithmetic expressions (expr, if, while, etc) to using boolean, int, double, and string data types. Additionally, expressions may not include array references or nested commands. TSP also assumes that builtin Tcl commands are not re-defined, as builtin commands are compiled to C or Java, or the native command implementation is invoked directly, bypassing the Tcl interpreter.

TSP is written entirely in Tcl, with support libraries written in C and Java.

md5 - This is a slightly modified version of the md5 function included in Tcllib, version 1.4.4. Various size message are tested. Times are in seconds. Timings for both C/Tcl and JTcl.

langbench - Larry McVoy's langbench, using slightly modified versions of the Tcl programs found in the benchmark. Several other notable changes to how the benchmark was prepared and run should be reviewed . Times are in seconds.

Notes - I've been working on this off and on for over two years, and thought it was about time TSP escaped out of the lab. TSP currently has about 9,700 lines of Tcl, 2,400 lines of C, and 750 lines of Java. All of my development has been on Linux, but since it's nearly all written in Tcl, there should be some degree of portability to OSX & Windows.

I haven't been able to find much time lately to work on it, so I'm hoping posting it now will spur some interest in others who might like to help out, test new ideas, work on code generation, etc. Interested in contributing? Start by forking the Github repository. I'm often logged into the Tcl Chatroom most weekdays for quick questions, or feel free to email. 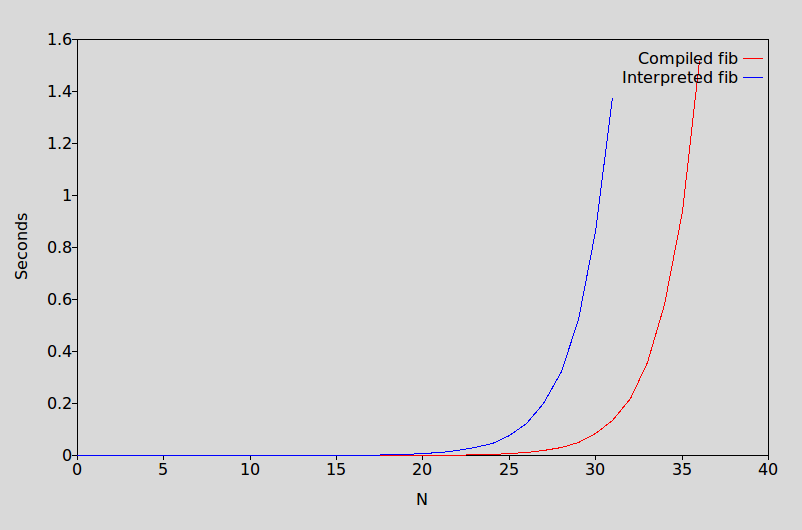 Reading the implementation is going to be a lot of fun!

The benchmark script is hidden below this discussion tag, in the unlikely case it's useful to derive more:

MiR 2022-04-28 Great tool! I got this up and running under TCL 8.6.6 using tcc4tcl last night and it seems to work after patching tcc4tcl and TSP. Just one thing made me puzzle: I had to comment out the usage of TCL_PushCallframe/TCL_PopCallFrame, since these are internals I don't want to use... and I don't know if this workaround has any side effects on variables (esp. namespace and upvar things)... I tested some of the benchmark procs (md5, cat, loop, hash, fib), worked. Update: Meanwhile 'I was able to get tclInt.h up and running under tcc (wich meant to cripple winsock2), patched tclIntStubsptr into tcc4tcl, add the stublibs to tcc (but converted to elf without underscore) and thus was able to get Push/PopCallframe back running. Had to patch some parts of TSP, esp. string comparison, which did expect TCL_DString, but got char* from tsp. I'm not a coder by profession, so I wonder if and how to contribute part of the patches back into TSP/TCC4TCL. I think this combination has great potential, if you don't want to compile whole apps, but only bottleneck-routines. Thank you a lot TP!

SEH 2022-05-21 - I would be interested in seeing your changes and giving the package a try myself. You could try forking the project on Github, adding your changes, then sending a pull request to the original project repository. Do you have a Github account?

TP 2022-06-22 - Happy to see some interest and work on TSP! MiR feel free to keep your own fork running, I haven't had time or motivation to work on TSP for quite a while. Using TCC as a compiler was a goal of mine too, gcc was just easier to get things up and running with critcl.

MiR 2022-06-23 - Yes, meanwhile I got TSP//tcc 0.9.27 running on win32 (Linux still some work to do), I patched some bugs in TSP and introduced some additions. Next goal will be to speed up runtime code in some special cases. Got great support from SEH!