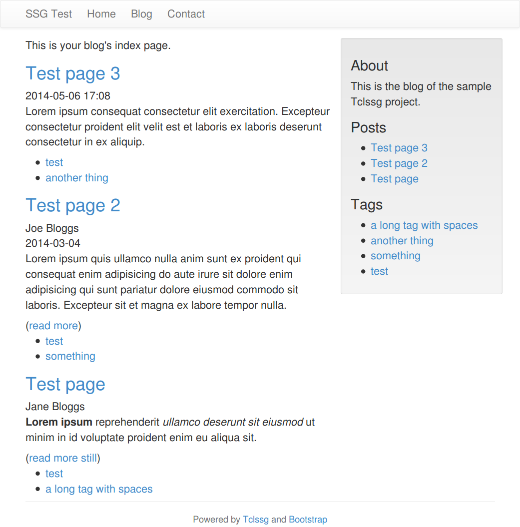 escargo 2014-07-16: It would be nice if you described supported platforms and prerequisites here.

dbohdan 2014-07-17: Thanks for the suggestion! I added platforms and prerequisites to the project summary above. A more detailed guide on how to install Tclssg can be found in the "Getting started" section of the README.

APN Nice! How hard would it be to replace the Perl markdown with a Tcl extension?

dbohdan 2014-10-02: It shouldn't be hard at all; all Markdown-related functionality is isolated in the proc ::tclssg::templating::markdown-to-html that calls an external Markdown processor of your choice (set in ::tclssg::config(markdownProcessor)). Using a Tcl extension would be a matter of replacing this procedure. Markdown.pl is included so that the generator can work out of the box on *nix without the user having to compile any C code.

dbohdan 2014-12-04: Version 0.15.2 removes the Perl dependency and replaces Markdown.pl with the Markdown package from Caius. 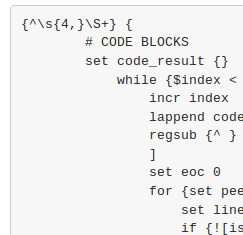 dbohdan 2014-12-05: Thanks, JM. I'll look into the indentation problem. Would you mind filing an issue at https://github.com/dbohdan/tclssg/issues and pasting the Markdown input file that causes the problem and the corresponding HTML output there? Either that, or paste both here in a code block.

looks like the generated code being indented from the 2nd line and beyond is just being treated as expected and shown as is.

HJG 2016-02-23: Is there an example of a picture-gallery done with Tclssg ? As in, several dozen photos, with thumbnails linking to bigger pictures (with descriptions), and generated links for next/prev, etc. ?