Widget-scopy, or or how to deeply inspect widgets properties.

When a probe is applied to a widget (i.e. the widget is 'instrumented'), it establish a bidirectional, symmetric channel able to communicate with the widgetscopes.

This kind of instrumentation causes a light overload on the application, but only when you put some widgets 'under inspection'. When you close all the widgetscopes, the instrumentation applied to your app is completely deactivated, missing. Widgetscopes run in a dedicated space fully separated from the application. They run in a separate 'interpreter', so that no conflict with your application's resources (procedures, variables, widgets,...) may occurr. The only parts that are loaded with your application are a set of procedures , confined in a dedicated namespace '::wprobe' that will be used to instrument just your app's widgets you want to inspect. 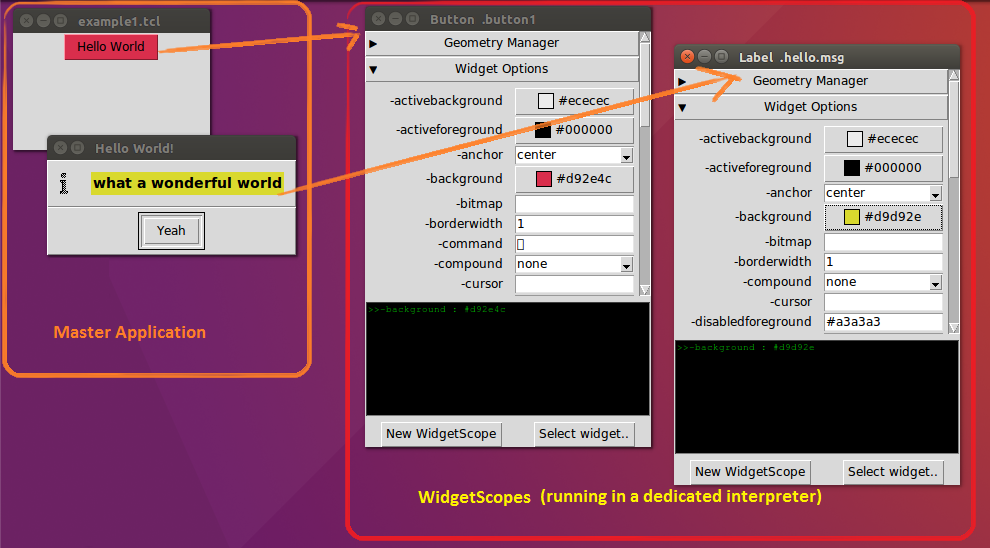 Wscope package should be installed as a standard Tk package, that is as a subdirectory of one of the directories given by the "auto_path" variable.

Let's start with a very simple TclTk application like the following

If you installed the package as suggested, you can run this application by typing the following command:

The above command in detail:

Start by selecting a widget (press the "Select Widget" button) browse the widgets in the "Widget Selector" window and then choose (double-click on) ".button1". Now you can inspect and change its properties. Note that when you click on the "Hello World" button, its attached widgetscope reports the changes (in particular for the "-state" and "-relief" options). You can also open (or deiconify) the TkCon console and type a command like the following

or conversely, you can act through the widgetscope; press the "-background" button, or type something in any text-box