Zipguy (2012-08-21) - I was getting a little blind after I've been using TCLkit for a while, on Windows. You can find out my email address by clicking on Zipguy. That's because I'm on a laptop which has a large screen, is pretty cheap and works great. But the font was smaller in TCLkit vs Wish.

I've been creating TCL programs, mostly starkits, and working on them. What was really annoying was the tclkit I've been using, tclkit-8.5.8.exe, and sdx. It's console has a really small font as it appears on my screen.

Here's the built in console in full blown Wish:

So I was right, it did have a smaller font. I poked around in the manual, wiki, and found this in console under discussion:

Brian Theado and I and maybe others have changed the console for UNIX script as part of the TkOutline project [L1 ]. After someone helps answer two questions I have, I think the changes should be propagated back here. They are:

This is a one liner that lets you increase the size of your font! I didn't know this, nor how to do this, but it does work great.

I changed it to this, now that I found how to do this.

Which is a lot more like Wish's full blown than this

I thought it might make others happier to know about this, and thus this page.

I never looked in the "Edit" menu on the console because it is so simple and almost never changes. I did look, in my tclkit-8.5.8.exe, and it does have it there! Thanks RLE 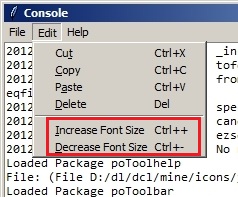 Wish's full blown console does not have it: 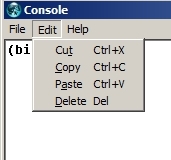 How come no one has said anything about this? I like it. So I tried it and it didn't work!

I did figure out why, so I made a change, and it did work. What I did was I commented out the line that this page is about!

Now I feel real stupid for looking for it when it was under the "Edit" menu all the time, and wasting time looking elsewhere. Even worse, if you do change it by the line above, then it becomes somehow locked.

I wish you could use the line above, or something like it, without causing the "Edit" menu font functions to stop working.

If you could, that would be great, because you could change it to a size setting that is better than stock, for most people rather than the default size in tclkit, then they could re-size the font to their hearts delight. Going to try some things.

Then the "Edit" menu entries continue to work. To see what font face is in use, do:

And using font configure you can change any of the properties of the font, and the "Edit" menu still functions.

which makes it a little bit bigger than -size 8, but the user can resize it to whatever they want. Here's what it looks like:

The thing that is a little wierd is that it says above that the family is "Consolas" which means it's Spanish? Doesn't matter.

Don't know where you found TkConsoleFont in, but I love it and thanks again RLE.

RLE (2012-09-07): I found it by doing: "console eval { font names }" and looking through the list of font names that came back. TkConsoleFont stood out as an obvious item to test at that point.

"Consolas" is the name of a font shipped with recent Windows systems (I do not know when it was added). It happens to be what the console code chooses for its font family if it finds it available on a Windows system.

SeS (2012-08-24): To my surprise, this 'console eval' command is also able to handle bindings...this enables some more possibilities: If one is really in a hurry, one could change the font-size on-the-fly with the Control-key and Mousewheel (aka webbrowser style and also as implemented in the Source Editor of tG² v1.06.01.42 ):

above, then I got the font real small, in fact ridiculously small, and back to a good size.

The good size is presented below:

and the ridiculously small size is given for example also:

Too small to read, even with a magnifying glass (for you phone people). No smoke and mirrors here. I did it by using "Control_-" and "Control_+", which are over on the right hand side of the keyboard (in the numeric pad area). Also I used the down arrow, once I'd typed in the command, to call it back, and the return key to run it again.

What if you ask for an even smaller size? I tried that also. It goes back to -size 12. It did that above. You can see that I used the command 16 times. :)