The [console eval] command provides access to the console's interpreter.

The console uses a separate interpreter likely in order to avoid confusion/collision of window names and command names that are used by the console.

By having this interpreter, these windows and commands are hidden unless the [console eval] command is used. 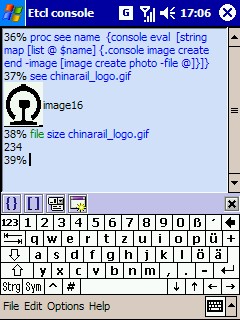 ET The above provides an alternative to puts, this lets you define your own text formatting. The actual console code defines a number of tags already, (stderr = red, stdin = blue, and others). This is why [puts stderr {string}] writes to the console in red.

This does not output a newline. You can add the \n escape in your string. You can intersperse with puts statements, as these eventually all get to the ConsoleOutput code. ET old version would bug out with a } in the text string.

ET I've recently tried out a new version of tcl/tk (8.6b1.1 as of 6/6/2010) and now the added widgets I've included into my console get focus when I type <tab> in the console window (to fill in such things as variable names - like tab in a unix shell). Since <escape> does the same function as <tab> in the console, this is not a showstopper but is just rather annoying. I haven't been able to figure out what has changed and how to fix it.

AMG: On win32, [console] prefers to set the font to ProFontWindows, if present. This font can be found here: [L3 ]. It's available in both bitmap and TrueType formats.

AMG: [console] behaves weird when there are already stdin/stdout/stderr channels. For instance, run wish from a MinGW rxvt terminal, then type "console show" into the rxvt. The console window will appear, it'll show the prompt like normal, and it'll accept commands. However, subsequent prompts will be sent to the rxvt, as will anything that's written to stdout or stderr.