foreach , a built-in Tcl command, iterates over all elements in one or more lists and evaluates a script at each iteration

foreach with coroutines , by KBK

foreach implements a loop where the loop variable(s) take on values from one or more lists. In the simplest case, there is one loop variable, varname, and one list, listn, and with each iteration, the next item in list is assigned to varname. body is a Tcl script that is evaluated once for each iteration of the loop.

Although any of the lists passed as arguments can be modified by body, the changes will not be seen by foreach as the loop iterations continue. Internally, Tcl will make a copy of the list where necessary in order to preserve this behaviour. If a list is large, modifying it within body can therefore have an adverse impact on memory.

To take multiple items from the list at each iteration, supply multiple variable names in varlist:

Multiple lists can be traversed in simultaneously by adding them as additional arguments to the command. During each iteration of the loop, subsequent items from each list are assigned to the corresponding variables. Items in each list are used in order from first to last, and each item is used exactly once.

The total number of loop iterations is large enough to use up all the values from all the lists. If a list does not contain enough items for each of its loop variables in each iteration, empty values are used for the missing elements:

break and continue may be invoked inside body, and have the same effect as in for. foreach returns an empty string. (From: TclHelp)

If all the list arguments are empty lists, no assignment to the corresponding variables occurs, and body is never evaluated:

The documentation could be interpreted as implying that the corresponding variables would receive empty values:

If a value list does not contain enough elements for each of its loop variables in each iteration, empty values are used for the missing elements.''

but then it goes on to dispel that interpretation, since zero iterations is large enough to iterate over zero items:

To stride through a list, picking up every n'th item, a dummy variable like $- can be used:

To save an array to a file:

Of course, you could have written:

but when editing such a file, the lack of line endings might give your text editor indigestion.

To save an array to a file, ordering it alphabetically by key:

In a canvas, applying foreach to the result of the bbox is often a convenient way to create canvas layouts. The following script illustrates the idea. 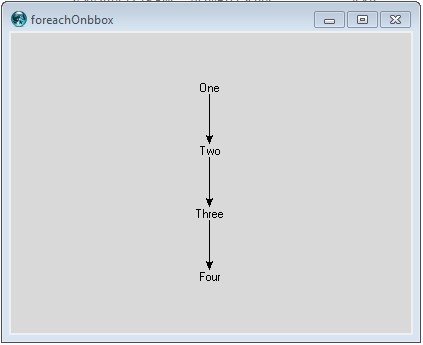 KPV: A similar example illustrates finding the dimensions of a canvas to shrink the size to provide a margin around the layout:

foreach as an enhanced set

One popular idiom is to use the varlist assignments to split up a list. The body in such cases would just be break to exit foreach on the first iteration:

A similar pattern can be used to swap variable values:

It might be tempting to abbreviate the above to foreach a $b b $a break, but don't do that; it really sets b to the result of [lindex $a 0] and vice versa, which in general is something quite different, and even when it isn't it will result in shimmering.

AMG: lassign can do both these tasks.

Unlike foreach, it returns any unused elements from its first argument. This makes it useful for detecting extra arguments or popping elements off a stack. Also unlike foreach, it won't create variables having an empty string value when its first argument doesn't have enough elements. This makes it useful for detecting insufficient arguments.

When using incr in combination with foreach to get the index of the item in the list, it's a good idea to set the initial value to -1 instead of 0, and incr at the beginning of the script rather than at the end, so that continue can be placed anywhere in the script:

The reason to incr index first in the loop body is that this makes continue do the right thing.

foreach can be used as a code block that runs exactly once, but can be exited from with break or continue (seen in a c.l.t post by Bruce Hartweg):

This is an alternative to nested if structures.

RS is not sure whether to recommend this style.. but proof again that you can do more with Tcl than you'd imagine...;-) Well hell, then add some sugar:

Or, to make your intention clearer:

AMG: This is like the do {...} while (0); idiom in C, which is useful not only in macros but also for creating a "structured goto" using break. Perhaps unfortunately, continue can't be used to go back to the top, since it first checks the loop condition; otherwise this idiom would effectively create two line labels at the same time. ;^) Very occasionally I wish for a "redo" statement that restarts the current iteration of the loop, bypassing both the loop condition and for's increment clause.

Development: What Could foreach Return?

SS wonders why foreach doesn't return the result of the last executed command. It can be useful for programmers using Tcl in a functional style. The same also apply to for. CL likes the idea.

rmax: Another useful return value (maybe even closer to functional programming) could be the unprocessed part of the list if a break occured in the loop body.

This could be done easier and would be less error prone if foreach returned the tail of the list:

Of course, this feature can only work in a useful way if foreach was called with just one list.

SS: Yep rmax, my past idea evolved almost exactly into a new idea similar to your suggestion. Actually I'm not sure about many different options:

OPTION 1
foreach always returns the return value of the last command executed, but can be called without the 'script' argument, and in such a case the variables are assigned, and foreach returns the rest of the list, so:

does what your example do.

OPTION 2
foreach always returns the rest of the list (with rest I mean the not processed part). The last argument can be omitted and defaults to break.

OPTION 3
foreach works exactly like today, but works as OPTION 1 when called without the script argument. That's fully backward compatible, but less orthogonal and less powerful.

AMG: [lmap] works just like [foreach] but indeed does have a return value. The returned value is a list accumulating the results of each iteration.