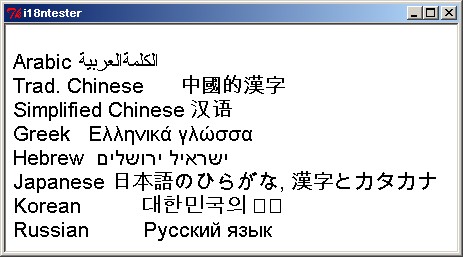 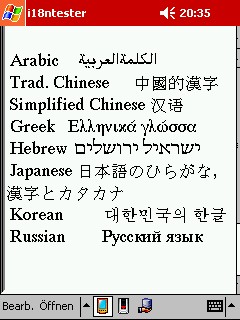 Richard Suchenwirth 2000-11-27 - i18n stands for that word with "i" in front, "n" at the end, and 18 letters in between - internationalization, adapting software to non-English language environments.

Here's a little script that shows you what exotic characters your system has available (Tcl can process all of the Unicode characters, but for displaying the fonts must also be reachable). It creates a text window and tries to show some sample text for the specified languages:

No font or size are specified, so you see the pure defaults (and notice how Tk manages to find characters). You can then configure the text widget for the fonts you'd like to see.

LV I keep running into the problem of users successfully finding and installing (so that Tk can locate) required fonts. Sigh.

AM On Windows XP these "special" characters from Asian languages (special in the sense that they are not Latin characters only, given the number of people that use them) may not show up, even if you have installed the proper fonts.

This may have to do with rebooting your machine. I saw only them after I had my system administrator install support for these languages via the Regional and language options explicitly. As this process involved rebooting the machine, that step alone might have solved the problem, but I can not be sure.

So, if all else fails: use these options from the Settings/Control panel menu.

This script later found its way into the Tk widget demo too, so you'll probably have it already :)

HJG 2014-09-06 - Look for that demo under "Labels, buttons, checkbuttons, and radiobuttons" - "Labels and UNICODE text". Also, I added some german special chars to the text.