if 0 { Richard Suchenwirth 2003-01-10 - Those who know me could have told that one of the first things to research on my new iPaq would be i18n. MS's site says Windows/CE supports Japanese, and a quick Google brought me to Mike Johnson's JPenSIP and MJDict packages that offer Japanese (Kanji/Kana) pen input and two English-Japanese dictionaries. I downloaded them and clicked on the .cab files - they installed well, and now I have a "Japanese Input" method available, and MJDict on my Start menu. Both work, after I manually copied their supporting files from /Programme to "/Program Files" - localization is still an adventure playground - and getting stroke order right challenges me even after years of doing Chinese...

But we want to talk Tcl, of course. The package installs the Japanese "MS Gothic.ttf" font, which is visible to Tk truncated to its first letter M - better not install other MS fonts... font families now returns M T C F B. To select the new font, it has to called by its full name, however. Another shortcoming of the Tcl/CE port is that the automatic font-finding doesn't always work - you then get the dummy rectangle (or little dot) if the specified Unicode is not available in the current font. This throws us back to the level known from MS software... But see font families workaround.

But anyway, if you have and specify the right font, Tk on the iPaq can now display Japanese. To wit: the following micro-app has an entry with initially "Hello, Japanese!" - "konnichi wa, Nihongo", and a scale with which one can experiment with font size scaling, also bound to Left/Right of the navigation button:}

if 0 {The bad news: the Japanese input method does not work with Tk - characters are inserted into the entry, but wrong ones, e.g. "n" for Hiragana "no". A pity, like the inoperability of Copy/Paste - let's hope for a future and more seamless ActiveTcl distribution for Windows/CE ... 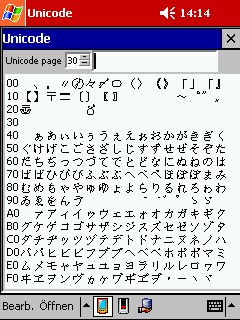 Latest news: From http://www.mizi.com/en/prod/mizios/mos-pro2.htm#download you can get a tar.gz file that among other bigger fonts contains a 3 MB TrueType font with Korean Hangul, "Baekmuk Dotum". Inspecting Unicode characters has a iPAQ-tailor-made browser to see what glyphs a font contains. Friends of Japanese and much more can still download the gorgeous Bitstream Cyberbit font from ftp://ftp.netscape.com/pub/communicator/extras/fonts/windows/Cyberbit.ZIP and have Arabic/Hebrew/Thai/Japanese/Korean (see The Lish Family for converter codes) at your fingertips...