Alpha is a text editor, just as powerful and configurable as Emacs, but having Tcl as extension language instead of lisp! 90 percent of Alpha's functionality is written in Tcl, so it is very easy to tweak it and extend it. The AlphaTcl library http://alphatcl.sf.net ) is nearly 20000 lines of Tcl code, full of gems and useful tricks.

See also AlphaTk, Vince Darley's reimplementation in Tk --- it runs in unix and windows too!

Joackim Kock: "Alpha's Tcl mode is really nice with syntax colouring, automatic indentation, comment handling, keyword and variable completion, templates insertion, many navigation features (e.g. Cmd-double-click on a proc name and be taken to the place where that proc is defined), and seamless integration with the built-in Tcl interpreter (or an external one if you prefer). . . .

Alpha would benefit from getting new Tcl-competent users. The development of Alpha seems to have stagnated a little bit, but each time there is some feedback and suggestions, there is a burst in development activity..."

AlphaCocoa : The AlphaCocoa project is a complete rewrite of Alpha for MacOS X, based on the Cocoa framework. It comes with an entirely revised and improved Tcl library of packages. 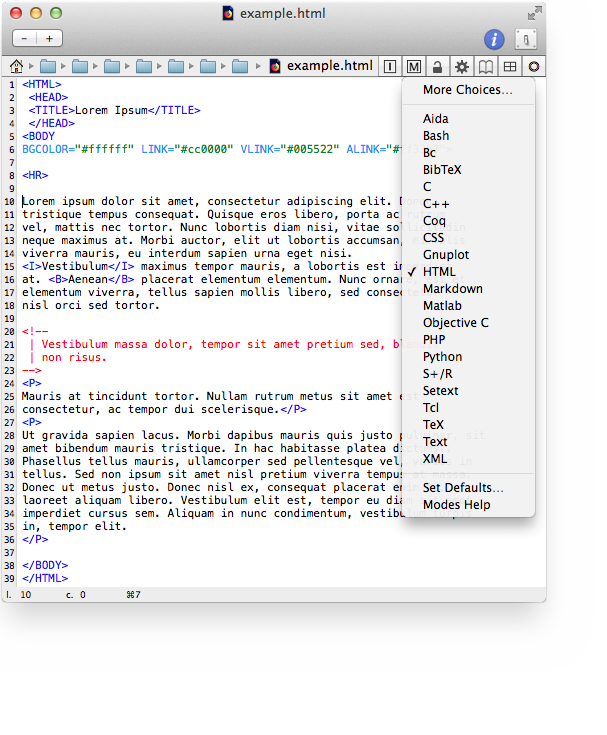