However, long before Microsoft decided to name their product this name, people had objects made of glass in the sides of their homes known as windows. Then there was this little open source project called X Window System, an instance of WIMP. And there probably were others who used the term as well.

The Microsoft Windows operating system has some effects on Tcl programming. While many characters are allowed in Unix file names, spaces are used rarely. Windows uses them a lot. Coding file operations to be tolerant of strange characters in file names requires some extra care.

LV Experts can improve the following as they see fit.

Microsoft Windows has several sub-platforms against which one can code. The win32 sub-platform is case-insensitive, uses carriage return/linefeed as the plain text file line terminators, and [add more details here]

The Interix POSIX sub-platform implements the POSIX 1 and 2 (??) APIs. It treats file names as case-sensitive, and uses linefeed only as plain text file line terminator.

Also, are there not 7 bit ASCII characters which are a problem if one were to attempt to use them in a Windows path or file name? Perhaps either \\ , or : and maybe others?

Apparently, though, builders and perhaps MIT itself failed to trademark the word, and now the general population has their own take on what the word means.

Too bad Hormel doesn't own the trademark on windows - they might sue over trademark infringement...

On the other hand, "our" language also squats some common words like wish and expect :-) Maybe we should trademark wish and expect and require Microsoft to pay us when they wish to use the terms... :o)

Just think how many times they expect to release something...

Or expect something not to crash. And wish it would stop doing so, the day after they do release it ;)

RS 2007-02-05: A colleague showed me this message on Windows XP (which however doesn't always come when tclsh is started): 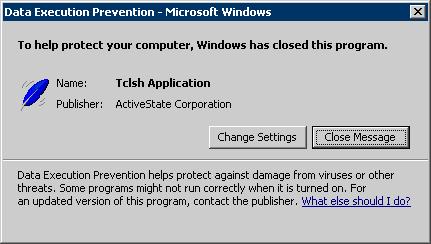 APN Was this by any chance a compressed tclsh or a starkit/starpack ? I've seen this before with UPX compressed executables because the compressed code would be uncompressed into dynamically allocated memory (which WIndows considers as "data" area) and executed from there.

LV Someone might want to discuss with the "powers that be" the possibility of updating pages like http://www.faqs.org/faqs/tcl-faq/tk/windows/ which are 8 years old...

How many ways are there to start an external Windows command (either .exe, .bat, or other)?

Generic commands that work on all currently supported platforms

Are there Windows specific methods?