This page is under development. Comments are welcome, but please load any comments in the comments section at the bottom of the page. Please include your wiki MONIKER and date in your comment with the same courtesy that I will give you. Aside from your courtesy, your wiki MONIKER and date as a signature and minimal good faith of any internet post are the rules of this TCL-WIKI. Its very hard to reply reasonably without some background of the correspondent on his WIKI bio page. Thanks.

For purpose of historical discussion, the single and double false position methods will be lumped together, since the early authors and texts do not separate the terms or have some ambiguity. The rule of single false position is implied in the Ahmes Papyrus, 1650 BCE. On some Babylonian tablets like YBC4652 from 1500 BCE, there are corrected or rescaled false positions for the weight riddle problems. In some double position problems, negative numbers crop up. The Sunzi work in China cites the method of excess and deficit, circa 400 CE. The Chinese report some problems as double excess or double deficit, so there may have been differences the way some false position problems were set up, ref. Nine Chapters Mathematics (in extant copy circa 250 AD). Qusta ibn-Luqa of Baghdad (860 CE) discussed the double false position method in his work. In 1202 CE, Fibonacci wrote the Liber Abaci with some DFP problems. Clavius published some DFP discussion in the Epitome Arithmeticae Practicae in 1583 CE. In the USA, the textbook of Nicolas Pike (1788) presented the DFP rules fairly well, but later school textbooks with more on algebra dropped the issue. At least in Europe, the methods of double false position include early records and notation of negative numbers.

The Ancient Egyptians did not use algebra, but modern algebraic expressions can be developed for the Egyptian methods. The chosen false positions can be set as (3/5)*side_distance and (4/5)*side_distance, as used in the eTCL calculator. The false positions can be loaded in the product and two errors can be developed from initial goal minus product. Set error1 or e1 as (product-fx(f1)) and e2 as (product-fx(f2)). A modern algebraic expression for double false position is solution1 = (e2*f1-e1*f2)/(e2-e1), with the errors as e1&e2 and the false positions as f1&f2 . Using later notation for negative numbers (1600 CE) and multply nom and denom of expression by -1, variant solution2 = (e1*f2-e2*f1)/(e1-e2). Problems and variant solution2 may have been set up to avoid using or loading negative numbers, if e1>e2 or (e1*f2)>(e2*f1) in solution1.

The double false position formula depends on how the problem is worded. A word problem in the Arabic formula style can be solved by hand calculations and possibly suggestions for the eTCL calculator can be developed. A buyer with funds of 450 dinars wishes to purchase silk robes at 6 dinars each. How many robes of silk can be purchased with integer dinars? The guesses will be for the unstated conditions that silk robes are preferred and the vender expects baksheesh or gift of 36 dinars. The first guess of 50 silk robes is effectively 450-50*6=150 dinars low. The second guess of 80 silk robes is effectively 80*6-450=30 dinars high. The Arabic formula solution is (fp1*e2+ fp2*e2) / (e2+e1), substituting (50*30+ 80*150) / (30+150) =75 silk robes. The Arabic formula entries are all loaded as positive quantities or absolute value quantities. Checking 75*6 equals 450, the initial sum. The vendor returns 75 silk robes minus baksheesh(36/6) or 69 silk robes. In the initial calculations, the eTCL calculator returns 75.5 silk robes for entries of 6/3/450, since the calculator is loading the constant 3 and using decimals. For eTCL calculations with baksheesh (36), the eTCL calculator uses entries of 6/-36/450 and returns 69 silk robes. Continuing on to a modern algebra solution, 6*x + 36 = 450, x = (450-36)/6= 69 silk robes. Without baksheesh, 6*x = 450, x = 450/6, x = 75 silk robes. In the eTCL calculator, running absolute values in the DFP formula was considered, but thought too far from the original Egyptian algorithm.

The Chinese used double false position (DFP) to interpolate the solution of a horse race problem in the Suanshu or Nine Chapters (commentary c. 260 CE). The Suanshu uses an indirect stage from direct questions (leap frog) or black boxes the error terms in modern terminology. Since this indirect stage of DFP problems is tricky, one can see why the some much later European works and even translations copied the easy stuff and dropped the indirect DFP methods in the Suanshu. Clearly, the available problems in the Suanshu show the versatility of the double false position method from joint purchases to horse races.

In the eTCL calculator, two false positions are supplied as guesses as false_position_1 <int <* $side_length >/ 4. 5. >>> and false_position_2 <int <* $side_length >/ 3. 5. >>> . Using the calculation methods, the two false positions produce numbers that fall short or long of the correct answer and the respective differences and errors are used to compute the final solution. A modern algebraic expression for double false position is (e2*f1-e1*f2)/(e2-e1), with the errors as e and the false positions as f. Some aspects of the double false position algorithm are similar to proportions and rule of three, as noted by many authors. The result is provided as </ $difference_cross_products $difference_error >. Note that brackets are set as <&> to avoid triggering wiki linkage. 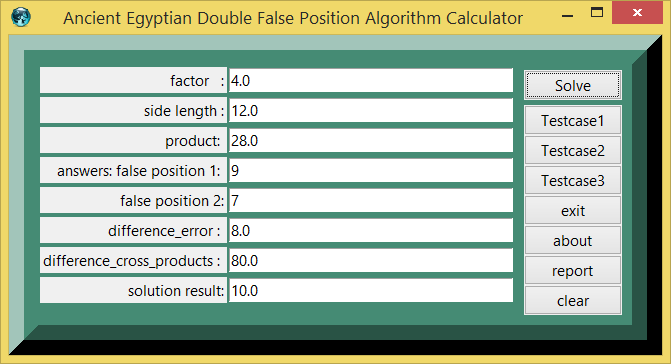 Please place any comments here with your WIKI moniker and date, Thanks, gold 12DEC2018