This page is under development. Comments are welcome, but please load any comments in the comments section at the bottom of the page. Please include your wiki MONIKER and date in your comment with the same courtesy that I will give you. Aside from your courtesy, your wiki MONIKER and date as a signature and minimal good faith of any internet post are the rules of this TCL-WIKI. Its very hard to reply reasonably without some background of the correspondent on his WIKI bio page. Thanks,gold12DEC2018

gold Here is some TCL scripts on the Babylonian quarter square multiplication algorithm. In reference to modern mathematics, the Babylonian multiplication algorithms and modern extensions fall under the broad umbrella of the binomial theorem and algebra . Aside from the TCL calculator shell or graphics user interface gui, separate console programs were developed to dump the quarter square tables and check the algorithms as independent TCL procedures.

In the cuneiform math problems and coefficient lists on clay tablets, there are coefficient numbers which were used in determining the amount of materials and the daily work rates of the workers. In most cases, the math problem is how the coefficient was used in estimating materials, work rates, and math problems. One difficulty is determining the effective magnitude or power of the number coefficient in the base 60 notation. In cuneiform, numbers in base 60 are written on clay tablets using a notation of relative place value. For example, 20 could represent either 20*3600,20*60,20,20/60, 20/3600, or even 1/20. The basic dimensions and final tallies were presented in the cuneiform accounts on clay tablets, but some calculations, some units, and some problem answers (aw shucks!) were left off the tablet. Successive or iterated math solutions are called algorithms and the multiplication methods are some of the earliest algorithms documented, ref the bulk of math tablets were circa 1600 BCE. The TCL procedures are descendants of this idea. The Babylonians did not use algebra notation, decimal notation, or modern units, so the reader will have to bear some anachronisms in the TCL code. At least one approach for the modern reader and using modern terminology is to develop the implied algebraic equations and decimal equivalents from the cuneiform numbers. Then the TCL calculator can be run over a number of testcases to validate the algebraic equations. For the examples of presenting algorithms to modern readers, the calculator shell will give product of long back side and short front side in meters for product of field area in meters squared. The units can be changed in the internal calculator formulas as TCL code. Any convenient and consistent output units might be used like millimeters, inches, cubits, feet, or dollars to donuts.

Formulas for Quarter Squares and Half Squares

The conventional Western formula for quarter square multiplication tables is a*b= expr (1/4)*(((a+b)**2) - ( (a-b)**2 ) ). A second Western formula is a*b = <(a + b)**2 − a**2 − b**2> * .5, need to check. Another Western formula with variable changes and rearranged in modern publication variants is a*b = expr <(a + b)**2 − (a − b)**2> * .25 . In opinion for the TCL procedures, the division operation of terms by 2 and 4 should be avoided and replaced by multiplication by .5 and .25 respectively, because of possible computer division by zero. Also for the TCL procedures, and although some original ancient formulas and modern extensions used positive integers only, the TCL equivalent formulas are written in the code as floating point typed variables , where possible. The modern reference tables used positive numbers including the extant Babylonian tablets, so the validity of negative terms and mixed positive/negative (+,-) numbers in products would have to be checked in possible methods using the tables etc. Not a mathematical proof, but the multiplication algorithm in the initial TCL calculator shell seems working correctly with negative and mixed (+/-) numbers.

Maybe some redundant material here on (1/4) equaling 0.25, but the Babylonians with their math tables could look up reciprocals and squares. The above rearranged formula a*b = a*b = expr <(a + b)**2 − (a − b)**2> * .25 could be interpreted as an extension for a full squares multiplication algorithm. Such that the hypothetical Babylonian method or procedure for a full squares algorithm may boil down and finish out to multiplication of 3 terms as ( square1 - square2 )* reciprocal. As the mathematician papers and others have suggested, the version a*b = expr <(a + b)*2 − (a − b)*2> * .25 would probably be the easiest for the Babylonians. Reference. Google Babylonian Multiplication by M. Lewinter and W. Widulski.

Comparison of the Algorithm(s)

For comparison of the Babylonian algorithm(s) with conventional Western methods, TCL code may include redundant procedures, redundant calculation paths, and printout check formulas to compute product, area, check diagnostics, and relative errors. The Babylonian quarter square multiplication algorithm is believed to be derived from the Sumerian Scribal land survey practices of averaging two opposite sides of a field to calculate the diagonals or area of a field. These averages of opposite sides were used in the approximate quadrilateral formula expr <((a+c)/2) *((b+d)/2) >, where the four contiguous sides of the field are a,b,c,&d. At least the Sumerians were averaging field sides (a+c)/2 circa 3000 BCE. As seen in the quarter square and half square formulas, sum and difference methods in general were an interesting staple of land surveyor's riddles, ref Friberg. But the extant Babylonian algorithms and tables discussed here are probably from a later period circa 1600 BCE.

Testcases with Half Square Tables

Many Place Reciprocals have Similarity to Modern Logarithm steps

In addition, there are rare LB. fragments or tables that have numbers in reciprocal pairs in base_60 with the added glyph ibsi, which means either square or square root, ref Friberg and Al-Rawi. In a general sense on other tablets, the term ibsi is associated with square roots, cube roots, raising a number in exponent, or the reverse, but the term ibsi linked with reciprocals is curious. The minimal conclusion is that the Late Babylonian mathematicians considered the regular base_60 reciprocals involved with squares, square roots, or powers. A complete explanation of the many place reciprocal tables is not available, but it has been proven that the many place reciprocals and square tables were used in school copying exercises, school multiplication assignments, and factoring algorithms. There are two multiplication formulas from the Old Babylonian tablets that used differences, sums, and squares. With a squint eye of the amateur, the Old Babylonian tables with many place reciprocals in base_60 look somewhat like the many place numbers (meaning digits) in the modern tables for decimal and natural logarithms.

In New Mathematical Cuneiform Texts, Friberg and Al-Rawi discussed a new method of algorithm for generating regular reciprocals in base_60. The tablet SM-2685 is an Atypical Ur III Table of reciprocals, that include additional and different reciprocal pairs from the later Standard reciprocal tables and two different method(s) than the Old Babylonian standard table of reciprocals (later era circa 1600 -1800 BCE.) The first method is “reciprocal compensation” and is related to the Old Babylonian doubling and halving algorithm. The second method is called “regular twins”. While the detailed discussion, base_60 features, and terms of Friberg and Al-Rawi are in the narrow corridor of math historians and linguists, the broad principles can loaded into TCL expressions using modern algebra and base_10.

Another later tablet CBS-29-31-21 has garbled text and procedures, but some cuneiform mathematical terminology may have an explanation now from the recent work of Friberg and Al-Rawi. The a-ra-kara (Sumerian) or arakum (Akkadian) procedure is to multiply a base_60 reciprocal by a high power of 2 and take reciprocal. The arakum math operator or procedure is apparently the cuneiform name or equivalent of the reciprocal compensation procedure. The reciprocal compensation method takes a known or standard reciprocal pair, N1*R(N1)=60. Then the terms of the old reciprocal pair are transformed into a new reciprocal pair as N1*2**A and R(N1)*(1/(2**A)). The check on the new pair would be the evaled new pair, { N1*2**A}* {R(N1)*(1/(2**A))}=60. The raising by powers of 2 assures that the new reciprocal pair is compatible with the defined regular pairs under number 60 on the numberline. However, since all the Old Babylonian standard table of regular numbers are defined as the product of (2**A)*(3**B)*(5**C), additional new reciprocal pairs could be defined by multiplication N1 by factors (2**A), (3**B), (5**C), or even (2**A)*(3**B)*(5**C). Of course, the other pair would use the factors of 1/(2**A), 1/(3**B), 1/(5**C), or even 1/((2**A)*(3**B)*(5**C)). While all the textual evidence and detail in not justified, the exciting part is evidence of new exponent considerations for 2,3, and 5 proceding from the set of Standard base_60 regular numbers.

In New Mathematical Cuneiform Texts, Friberg and Al-Rawi discussed a new method or algorithm for generating regular reciprocals in base_60. The tablet SM-2685 is an Atypical Ur III Table of reciprocals, that includes additional and different reciprocal pairs and two different method(s) than the Old Babylonian standard table of reciprocals (later era circa 1600 -1800 BCE.) The first method is “reciprocal compensation” and is related to the Old Babylonian doubling and halving algorithm. The second method is called “regular twins”. The tablet SM-2685 limits itself to reciprocal pairs under the condition N1*R(N1) = 60 even, meaning the numbers in the listed reciprocal pairs are under 60. But tablet SM-2685 includes reciprocal pairs as separate integers, fractions, and mixed integers plus fractions. While the detailed discussion, base_60 features, and terms of Friberg and Al-Rawi are in the narrow corridor of math historians and linguists, the broad principles of reciprocal compensation and Babylonian regular twins can loaded into TCL expressions using modern algebra and converted to decimal notation.

Rules of Thumb from Babylonian Tablets

Here are some rules of thumb from Babylonian brick constants and Babylonian math problems. A sun dried brick has water content and also as hidden water. Some sun dried bricks have straw content. Straw content should not be a factor in fired bricks. Sun dried brick weight over wet and heavy brick weight equals 40/60 or second try equals 48/60. Sun dried brick weight over baked brick weight equals 50/60. Fraction 1/6 is mortar for clay wall. Weights of wet and sun dried bricks in table BM36776 have factors 3/2 and 6/5, per Friberg and Robson. Second and third section of factor equals 3/2. Fourth section has factor equals 6/5. Water approximates 12/60 weight of wet brick. Weight loss (water) is 10/60 of dried brick to baked brick. { 1 kus ba.an.gi4 } means 1 cubit returned or 1 cubit back, used in brickwork. The daily cartage quota is 37_30 talents per us per day equals expr {(37+30./60.)*30.} or 1125 kg per 60*6 meters per day. The daily cartage quota is 1_15 talent per danna per day equals expr {(1.+15./60.)*30} or 37.5 kg per 10.8 kilometers per day.

For the push buttons, the recommended procedure is push a testcase and fill frame, change first three entries etc, push solve, and then push report. Report allows copy and paste from console. For testcases in a computer session, the TCL calculator increments a new testcase number internally, eg. TC(1), TC(2)., TC(3), TC(4) etc. The testcase number is internal to the calculator and will not be printed until the report button is pushed for the current result numbers. The current result numbers will be cleared on the next solve button. For comparison of the Babylonian algorithm with conventional Western methods, TCL code will include redundant procs, redundant calculation paths, and printout check formulas to compute product and area.

Table 4: Babylonian Exponent Tables or Babylonian Logarithms??? Tables in base 16 and base_2 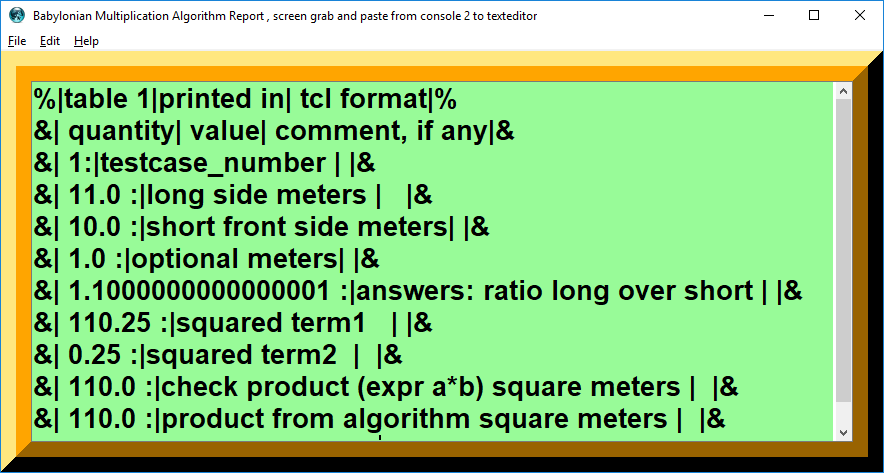 Please place any comments here with your wiki MONIKER and dates, Thanks,gold12DEC2018

gold 9/27/2021. Switched some comment signs ;# to #. This a big file. Check earlier editions, if not compatible. Maybe obvious, but this page was written on Windows10 Tcl ports including ActiveTCL. I assume that the reader can cut and paste on screen, what the reader needs, and tootle on to his own project and own contribution pages to the TCL Wiki.