TV As a worthy addition to the BWise examples of using graphical flow based programming with Tcl/Tk I demonstrate a C function connected with a BWise flow being transformed into a FPGA program, connected with a live BWise graph and run on an embedded Linux system. The A.R.M. based Parallella board (see Bwise on the Parallella) can also run the bwise application and can run for instance mat problems competitive with desktop computer speeds.

I use the latest Xilinx tools for Silicon Compilation, which happen to completely run from Tcl commands. The C function being transformed into an FPGA image dynamically loaded into the Zynq 7010 board is automatically turned into an AXIlite bus connected Verilog function by Vivado_hls, which requires little adaptation to a regular, complex C function with variables transferred by name, allowing any C control structure and includes C library functions like math calls.

Would it be possible to implement parts of BWise in a FPGA, using this extension method? Actually, that could improve the speed of running the blocks of a BWise graph quite a bit, but, the block execution procedure is written in Tcl, so that would be the next bottleneck.

Those three methods of checking out our sine table initialization and testing, Maxima well formed formula, C function (with the exact same C function that was compiled to FPGA by the free Xilinx tool set) and actual FPGA implementation can be compared using BWise blocks, driven by the same test value, input as an integer in text form. The Maxima (see e.g. Bwise blocks using exec maxima) interpreter takes an integer in text form, interprets it as integer, computes the desired lookup value, and returns it in text integer form. The C program simply reads an argument from the command line and converts it from text to a short integer, like used by the example function. The FPGA lookup and initialization (once when the programmable logic image is loaded in is addressed by the Zynq boards' A.R.M. CPUs over AXI-lite bus the first time) sets up the IO to and from the FPGA logic to be under control of the Tcl extension (see above link), so it's possible to pass a integer that got converted from text to a machine integer over the device register communication without extra copies or conversions, and the same for the return value.

So to get a test BWise canvas going, we need the tcl functions from the Tcl FPGA extension page above, and a new one for the C function simulation by an actual normal C program:

And we make these 3 different "run" procedures into bwise blocks with one input and one output (a string representing a short integer):

We add an input entry and some monitors: 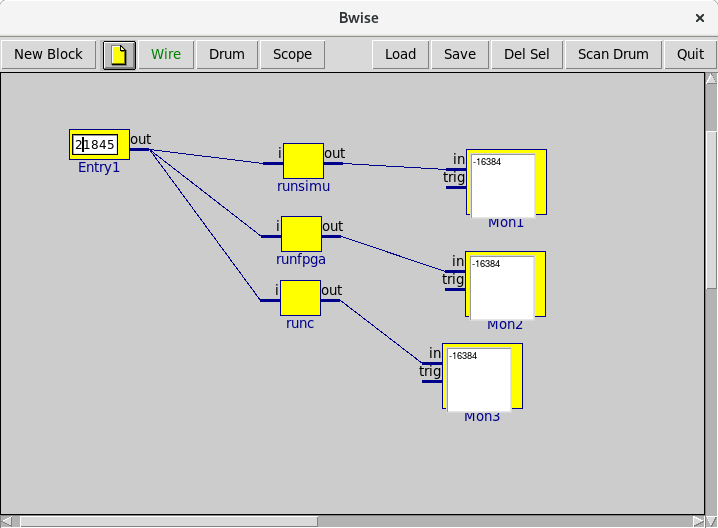 So now, we can type in values in the entry on the left, and see what the different function implementations from Maxima math, C, and FPGA-C yield as output in practice, running bwise on the devboard with the fpga and maxima installed. We can also set the input integer smart, like at (-)Pi/6 :

So that the outcome should be 1/2 from the full range of short integer values, and all blocks agree to this.