I had already downloaded over 100 programs from mostly this site, but others too. I found it real hard to execute them under Windows, so I wrote a program to make it easier for me. Some other people might find themselves, in the same pickle!

I've got the find and run program (far) working pretty well, although it's only just starting, so far, it's only version 0.11d. It may change a lot, in the future.

It does let you change folders, sequentially. Also, you can jump to a folder, on the same drive, or one on a different drive. It does use Ulis's multilist, which I did like to display the files in a folder. He has passed on, but I thank him for what he's done, I learned a lot from what he did. So, go get back to where I was, in my program, I have modified it so that it does have 5 columns labeled 'Name, Ext., Size, Date and Attr', which it fills in for each file, in the current folder. It does look like this: 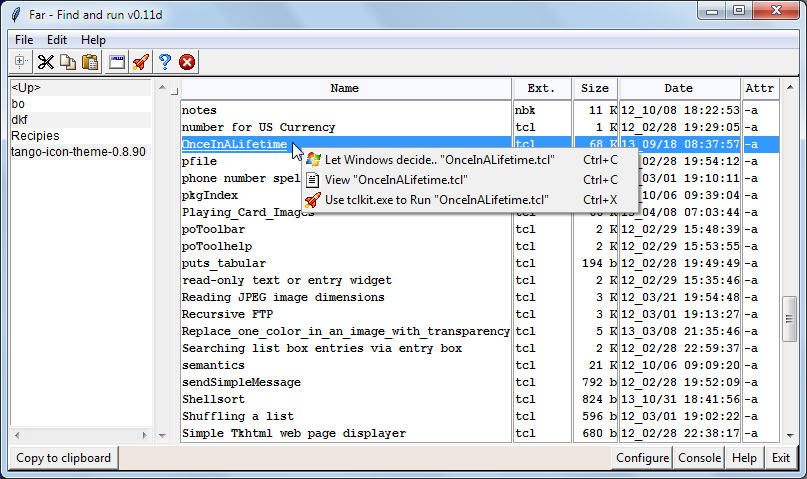 Some times that may take a while, but on others, it may load the data, extremely fast. I think it has to do with the memory it has to use to display those files. For example if you've been in directory before, it does load the data quickly. But it does work, even when far is loading a large directory slowly.

As you may noticed, in the picture above, I have selected a file first, by clicking on it (this is what ulis did, in his A minimal multi listboxes megawidget, which I've modified to give it 5 columns). Then, I've right-clicked on it, and I have a short menu. So far I have:

for the file you've selected. You may have noticed the Accelerator keys, which don't work yet, and I haven't bothered to make a menu, not a toolbar specifically for this program. But I do have a nice Icon for the "Directories" function, which I made myself.

I thought it might be good for others to know what irons I have in a fire, heating.