Important Note. Not a Replacement

gold 7/5/2021 update. Important Note. This page were largely developed under the earlier TCL4, ETCL, and TCL8.~~ versions on an outdated personal computer. This page is not a replacement for the current TCL core and TCLLIB with much improvement since TCL4 and other <faster> language constructs. See better routines and current methods for angle reduction, sin, cos, pi, etc in the TCL core distribution and TCLLIB. As of Jul2018, the TCLLIB has developed code for trig angles in degrees, trig inverse, and hyper functions in degrees, and angle reduction in radians and degrees. This supplemental trig.tcl, trigtest.tcl, and trig.man code is posted on the TCLLIB website. This math::trig.tcl seems really exciting work, which will keep TCL in pace with some of the other brand name languages (math oriented, I mean). Some of the TCL library code is posted as pending on the TCLLIB website, and sometimes not really in the main TCL distribution yet, so its worthwhile to investigate and run searches on the pending TCLLIB code, the SourceForge bins, and [L1 ] locations also. The TCLLIB math library is generally quicker and more accurate by a third over some homebrew code, see math::mean , Additional math functions, [L2 ]. The numerous examples on this wiki page include code lines that might be incompatible, inefficient, dead_weights, or redundant if installed in the same program. As discussed below, the local math procedures in scripts and one-line procedures may not be as fast and efficient as importing mathop , mathfunc, and math from TCLLIB and SourceForge, so check with the precompiled code in the TCL core and TCLLIB libraries >> first <<, then homebrew your one liners programs and scripts in TCL.

Horses 1)quadratic and 2)exponential appear winners of field with more than 200 entries for sine fitting functions. The fitted points on the sine curve were 0<x<90 degrees and available to double precision, E-14. Some calculations appear defaulted to single precision, E-7. Tabled chi results from 208 equations of 2 parameters (2P) or 2 terms (t2), from the non-linear curve fit algorithm (NLCF). Undoubtly, this would be hundreds of man-hours in paper calculations, but done automatically on the computer in three seconds or less. As might be expected, the sine, cosine, and tangent functions appear with high on the computed CHI scores, but analysis is looking for functions comparable to Taylor series and independent of trig functions, not snake eating tail. Trig functions are trivial results in this search, but leaving available in table, in case trig results jog memory.

For inclusion in the horse race of sine fitting formulas, the classic sigmoidal functions were estimated like the Richards growth curve, Weibull growth curve, Gaussian growth curve, and Gompertz growth curve, but sigmoidal chi scores were not stressing the pack. In these growth functions, the Levenberg-Marquardt (L-M) algorithm was used with double precision C's. These sigmoidal formulas were loaded into TCL procs.

Various curve fits for the tangent can be evaluated over the interval from 0 < aa < pi/4 and compared to the spreadsheet tangent. The first curve was a linear fit as Y=aa*slope or Y = aa* (1/45) degrees. The linear fit for small angles less than 15 degrees is fairly good and has been used in numerous astronomy papers. At small angle, the sine curve is very close to the tangent and the second order sine multiplied by 2/(sqrt 2) to fit the tangent exactly at pi/4 is fairly close to the spreadsheet tangent. However, the tangent curve is steeper than the second order sine. Given the first two terms for taylor series of tangent (x+(1/3)x**3), a second order sine expression like the Bhaskara_sine would not match the steepness of the true tangent. The Bhaskara sine formula (cc=40500) times 2/(sqrt 2) is fairly close to the tangent and was found to have a relative error of 0.17 percent over the interval of interest, 0 < aa < pi/4 . Adapting the Stroethoff formula for the tangent, the Stroethoff_tangent is (2/(sqrt 2)*27900*aa*(180-aa)+aa*aa*(180-aa)*(180-aa)/291600000.

The console program below contains an angle wrap reduction procedure in degree measures for the Blaskara sine. Several dusty C++ posts have mentioned a large angle wrap error in C++ versions of angle reduction schemes, for angles of 1.E22 radians. Another post cited angle wrap reduction for trig functions as a non-trivial and unsung problem (probably in round-off error on floating points). This style error can be duplicated in the TCL proc with an input large angle and an input angle error, counting an initial error as 1E-13 and loading large angles as proc(1.0000000000001E5 degrees) returning 280.00000000999, proc(1.0...1E10 degrees) returning 280.000999, and 1.0...1E12 returning 280.0999 . The wish85 window delays returning console after loading greater magnitude angles, but the error growth will sink useful answers after inputs over 1E15 degrees.

The trial error for the console program below for pi/4 or 45 degrees was expr (0.707106-.705882)/.705882 = 0.001734 or 0.17 percent. For angles greater than -+360 degrees, an angle reduction procedure was added to evaluate only angles less than 360 degrees magnitude. The validity for the original Blaskara sine formula was positive angle in the interval from zero to 180 degrees. Blaskara was very careful in selecting his interval of validity; the published Blaskara sine table was from zero to 90 degrees. One good feature of the Bhaskara sine is that the Blaskara sine by itself is roughly accurate short of the interval end at 180 degrees or pi limit, unlike the Taylor and Pade sines which fail much beyond pi/4. For example in testcase 4, the Bhaskara sine evals 179 degrees with relative accuracy of 0.017 or 1.7 percent. Some of the other B_trig functions begin to fail after pi/4, so the valid region for each B_trig function has to be carefully checked. Extending the Bhaskara sine into other N*180 regions is possible with fold and multiply -1. statements. Additional significant figures are used to check the TCL console program, not to infer the accuracy of inputs and product reports. 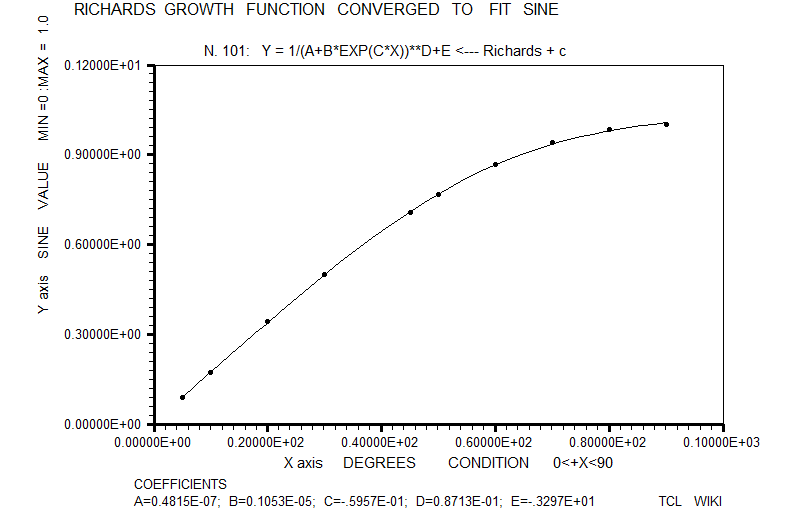 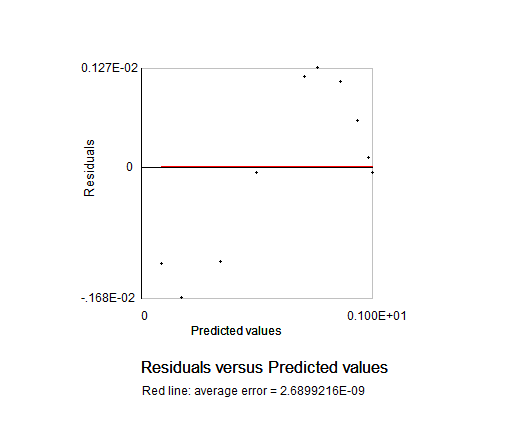 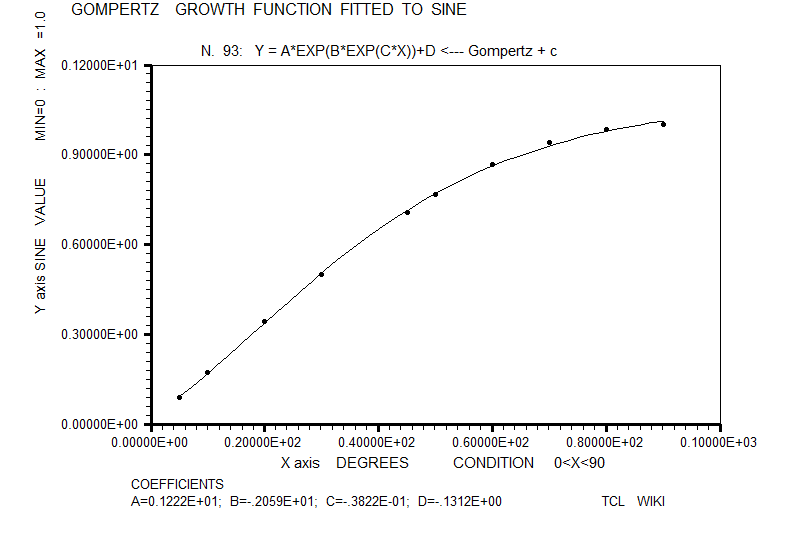 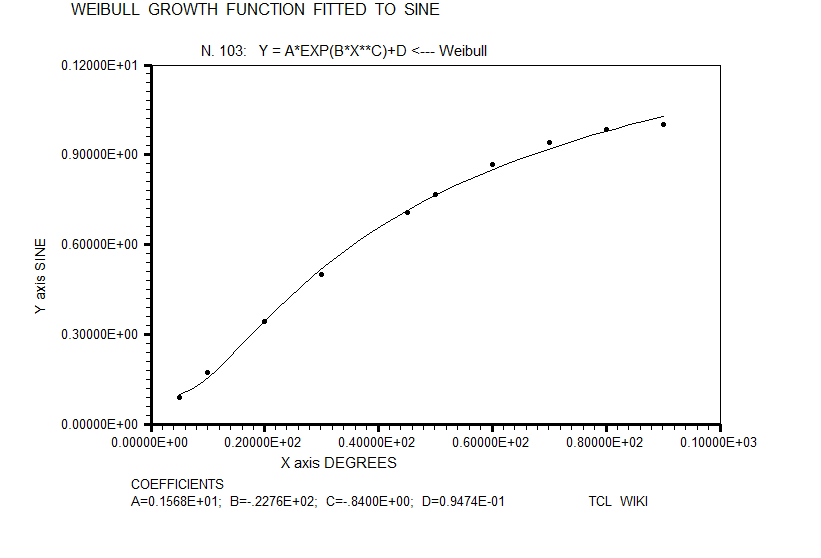 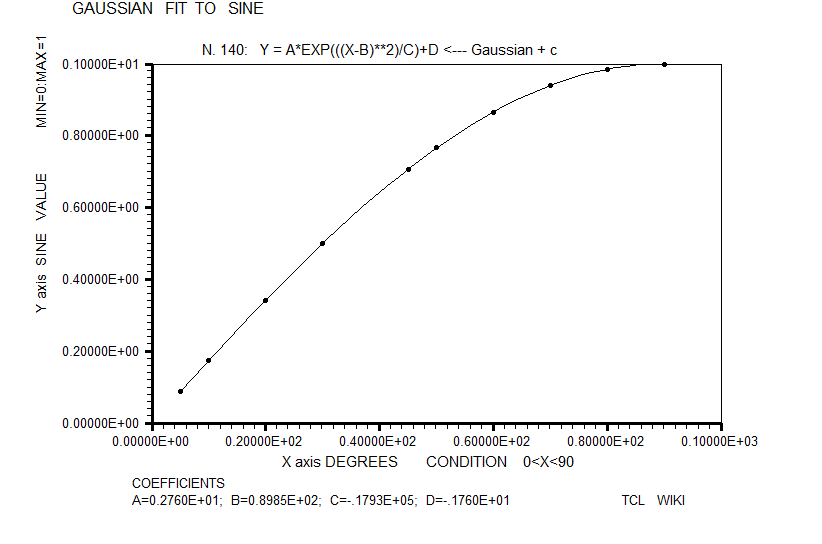 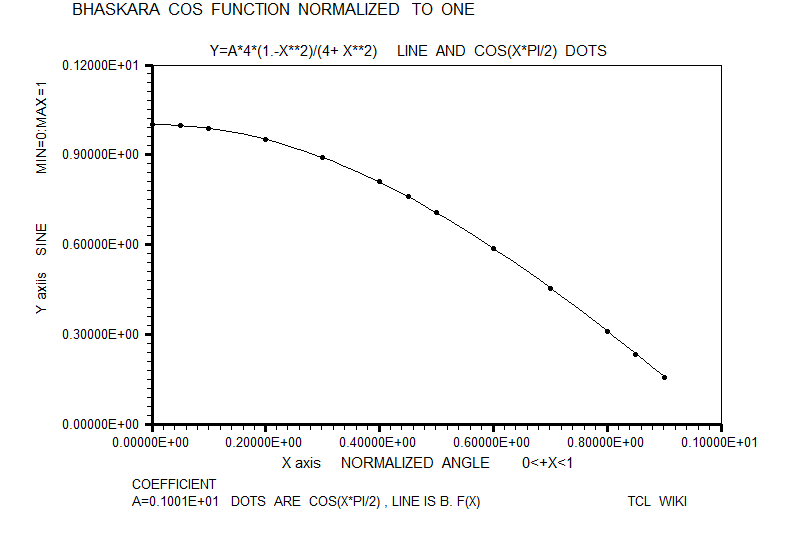 figure 19. Simplest quadratic fit to sine, normalized to one 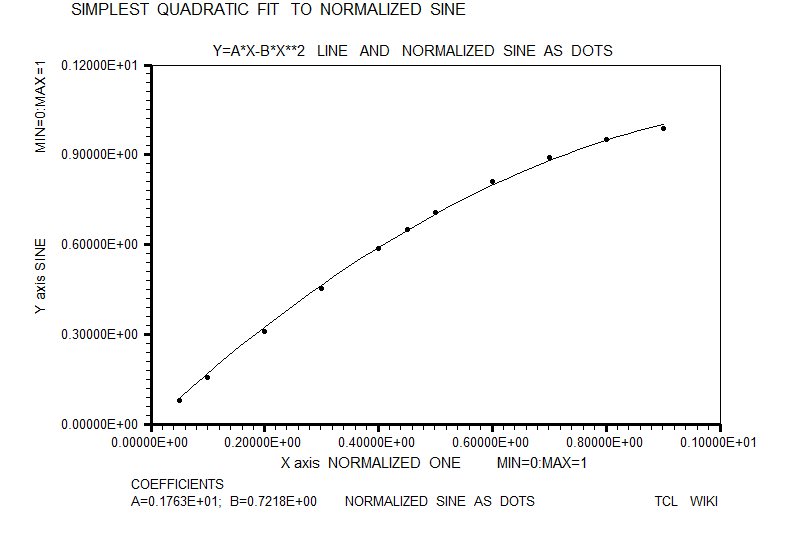 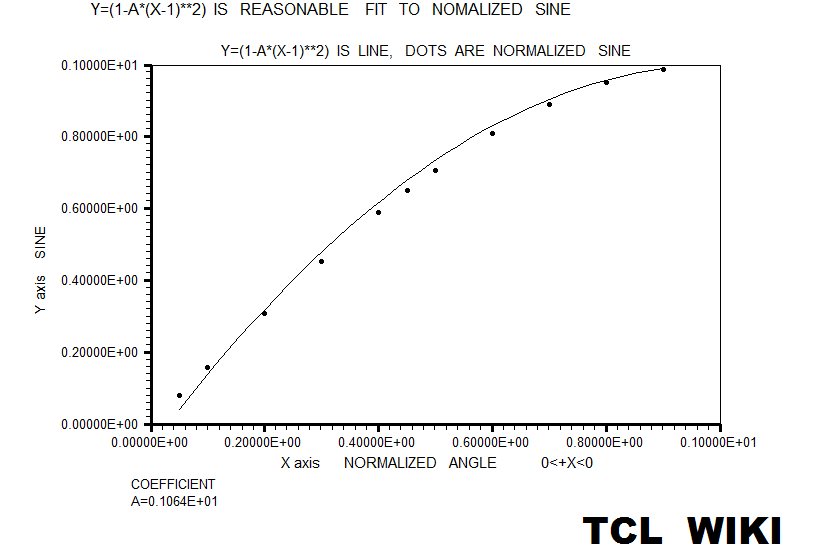 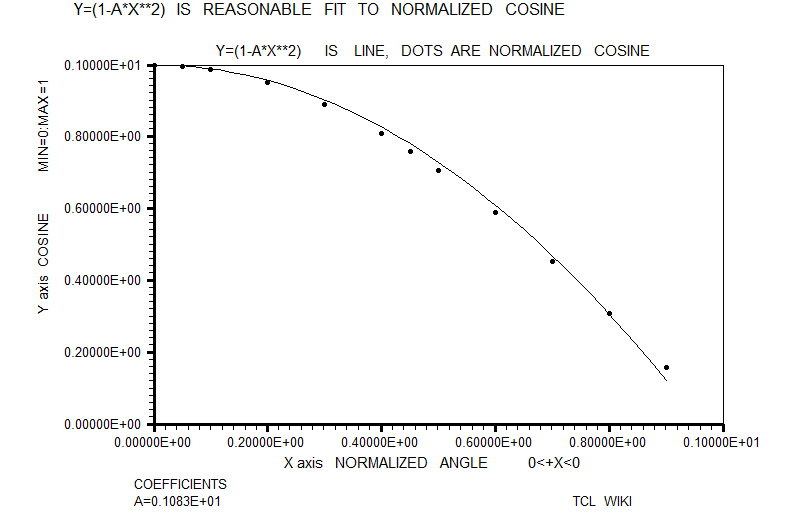 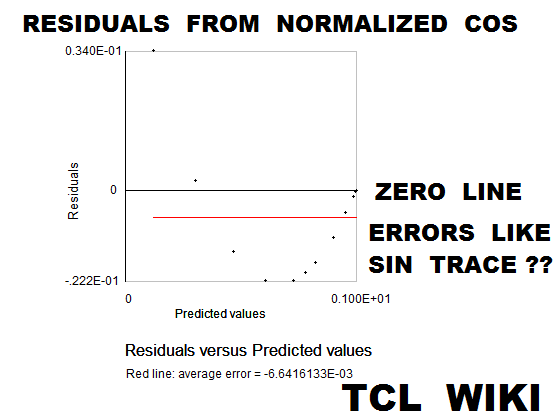 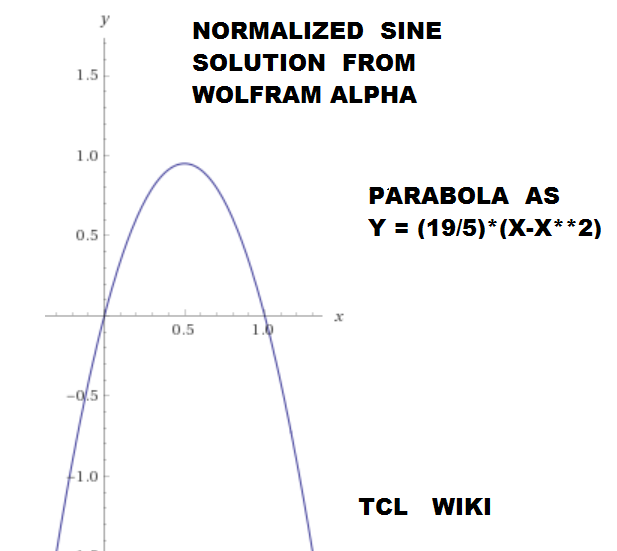 In planning any software, it is advisable to gather a number of testcases to check the results of the program. The math for the testcases can be checked by pasting statements in the TCL console.

gold 2Dec2018. Important Note. See better routines and current methods for angle reduction, sin, cos, etc in the TCL core distribution and TCLLIB. As of Jul2018, the TCLLIB has developed code for trig angles in degrees, trig inverse, and hyper functions in degrees, and angle reduction in radians and degrees. This supplemental trig.tcl, trigtest.tcl, and trig.man code is posted on the TCLLIB website. This math::trig.tcl seems really exciting work, which will keep TCL in pace with some of the other brand name languages (math oriented, I mean).