Jigsaw Puzzler is a jigsaw puzzle game. It allows jigsaws to be created, saved, loaded and played. I started writing it over a year ago to learn more about using the canvas.

The windows executable version uses tile and so has a native look on Windows. 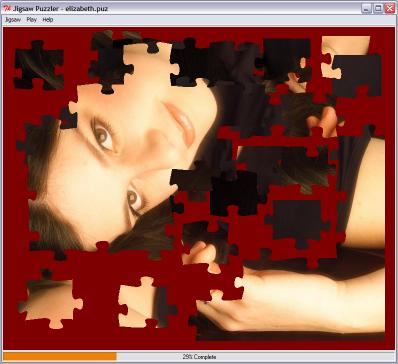 I expect to provide some jigsaws to download from the link below soon.

It is freely available from: http://www.easton.me.uk/tcl/jigsaw/index.html

HZe 8 Jan 2005 That's really cute! I love it. While playing, I had some extensions in mind I would like to share. Perhaps they can easily be added:

It must be perfect to play this on a touchscreen...

DPE 21 Feb 2005 Thanks for the feedback. These are good ideas that I have considered adding and will put in if I develop this any further.

JAG, 21-Feb-05 - Very cool app... My daughter loves it... Nicely done... I've used it on both WinXP Pro and Win98 without errors of any kind, though I did discover what appears to be a small bug. When loading a puzzle (Jigsaw | Open), the "Percentage of Completion" shown at the bottom of the screen seems to be overestimated. For instance, a puzzle that was saved in an entirely completed state will reload and show "144% Complete". A puzzle that was saved with 0% completion reloads as "2% Complete". Oh, one more thing - internally, in the "help" proc, it appears that Jigsaw was authored by me, and beta tested by my daughter. You might want to update that text... ;^)

DPE 28 Feb 2005 Hmm - I wonder where I borrowed that help text from :-). I've removed it for the next release - version 0.9. Thanks for the error report, the percentage completion is also fixed in version 0.9.

WJP 2007-06-28 I decided to pack a single puzzle into a Starpack, with jigsaw.tcl modified to load my puzzle file, so that I could send the puzzle to a friend who would find installing Tcl etc. too difficult. If I create an MS Windows Starpack and run it on Linux under Wine, it works. If I create a Linux Starpack, it is unable to load the puzzle file. It is looking for it in the right place but for some reason the load fails. This is with Tcl 8.4.14. Any idea what is wrong? I notice in the changelog mention of problems with previous versions of Tcl that are said to have been fixed.

DPE 2007-06-28 I think the starkit contained the JPEG image part of Img for Windows only. If the source image is JPEG then it probably will not load in Linux. Have you tried it with a GIF source image as this might work under Linux?

LV 2007 June 28: Actually, the starkit code, at least, has no Img use that I can see. And jigsaw.kit works just fine on SPARC Solaris (well, as long as I use a relatively recent tclkit). The ChangeLog for jigsaw says that tile and img were removed a couple of years ago from the code.