AMG: For a school assignment I wrote a 3D model viewer in Tcl/Tk. The assignment description is at [L1 ], with an older, alternate copy at [L2 ]. Check those Web pages to find model files, or try my site [L3 ].

People love screenshots. I shall now attempt to please people. 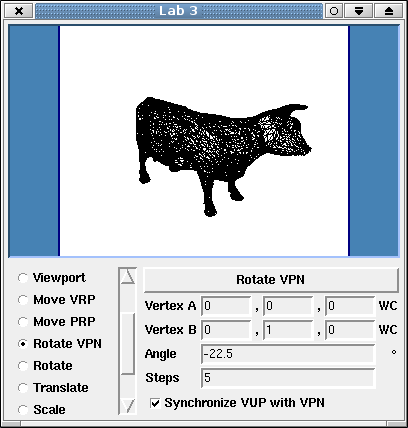 The program, in its current form, is written with the assumption that the input will be two model files, together comprising the standard teapotahedron and its lid. I don't much care for this arrangement, but it's required by the assignment. Now's my chance to fix it, but I'll let it stand for a bit. Feel free to contribute, if you think this program is salvageable.

Also it's kinda slow on most computers I've tried. It's fine on my Athlon 64, but it dogs on the school computers. If I switch to polygons it should be faster due to having fewer canvas objects, but then again the clipping algorithm would become more complex.

WC
World Coordinates. This is X, Y, Z stuff relative to the center of the universe.
VRC
View Reference Coordinates. This is U, V, N, relative to the VRP, the thing you're looking at.
NSC
Normalized Screen Coordinates. Onscreen coordinates, where (0,0) is upper left and (1,1) is lower right.
VRP
View Reference Point (WC). The thing you're looking at.
VPN
View Plane Normal (WC). The N axis points along this direction.
VUP
View Up (WC). The V axis points this way.
PRP
Perspective Reference Point (VRC). Basically this is where your eyeball is relative to the thing you're looking at.
View Volume
Frustum. This defines the region you can see in the viewport.
Viewport
Window. This defines the onscreen coordinates to which the view volume is mapped.

Load
Load a model file (or files, as the case may be). If you want to load something other than a teapot, just put its filename in the Pot entry.
Perspective
Adjust perspective parameters.
View Volume
Adjust view volume.
Viewport
Adjust viewport. You can also do this inside the canvas by dragging the white box or its border.
Move VRP
Translate the VRP. This is like moving your head around while looking in the same direction.
Move PRP
Translate the PRP. This is like moving your head but continuing to look at the same point in space.
Rotate VPN
Rotate the VPN. This is like moving your head around while looking at the same point. Specify two vertices on the axis about which you want to rotate, and give an angle in degrees. For instance, to rotate about X, say (0,0,0)-(1,0,0). If the step count isn't 1, the rotation is animated. Remember that the coordinates are WC, so if VRP's not at (0,0,0) you'll want to translate your rotation axis to accomodate. Maybe I should change this...? Also, you will want to enable Synchronize otherwise weird things will happen. (The lab instructor required that it be off by default.)
Rotate
Rotate the object. Visually this is like Rotate VPN except the direction is reversed. Rather than move your eyepoint, the world is moved.
Translate
Translate the object. Like Move VRP except you stay put while the world moves.
Scale
Scale the object. Stretch and shrink the object by X, Y, and Z factors. To keep the object the same size, use a factor of 1 not 0!
Animate
Animate the "lid" of the teapot. The implementation really bites; it only works with the official teapot and lid models. So stipulateth the assignment. This option is worth removing, but I won't do so until I have a better model file format to work with. And I don't think I want to bother, not for this sort of demonstrate-the-concept program.
Options
Adjust... stuff. You can change the animation speed here. Also you can highlight clipped lines in red. Later I might add options for rendering polygons instead of lines, performing lighting, backface culling, overlaying the window with axes, etc. Or I might just redo the whole thing.

Here's the source. It's kinda long by my standards, but it's much much MUCH shorter than the programs written by the other students. I credit Tcl for allowing me to express myself so efficiently.

MBS : Just out of curiosity, How much shorter? What language(s) did the other students use?

AMG: The only one I know for sure was 4000-5000 lines, in Java. Okay, so I admit my evidence was anecdotal and my sample size was two. :^) So I'm polling the class. I'll post the results here, without names, as they come in.

Thank you to all who responded.

GWM as a sidenote to your future students, look up http://www.openscenegraph.org , download the source for the OSG project, compile all the DLLS (or .so if using linux) and run 'osgteapot.exe' from the command line. Lets call me respondent:

The benefits of using a serious scene graphing language/library should now be obvious! Given an OpenGL widget (I use togl) the teapot can be run using about 100 lines of Tcl/Tk plus all the DLLS which are LGPL free to distribute. Congratulations on your sterling effort nevertheless.

AMG: My future students!? Heh. Anyway, the whole point of the class was to teach us the math underlying 3D graphics. While punting all the work to OpenGL and OpenSceneGraph may be the practical thing to do when writing real-world code, it doesn't help us (the students) learn the equations for lines, planes, frustums, projections, clipping, lighting, etc. There was an assignment to add another gear to the famous gears demo [L4 ], and for extra credit we could animate a robot; those assignments required OpenGL.

Okay, here is the source!