Purpose: to provide a collection point of information about the use of Tcl/Tk and the OpenGL 3D graphics libraries.

100. While not directly supporting Tcl, the WWW page at http://WWW.thp.Uni-Duisburg.DE/Ygl/ReadMe.html describes an X11 version of a simulation of SGI's GL under X11. You might try this with the Tcl/Tk OpenGL interfaces.

Zinc is an impressive achievement that will interest OpenGL students. Only 2D.

Tk3D has (among other things) an OpenGL widget. Unfortunately, the open-source version only supports Unix/linux. (That's easy to fix, though, for someone who knows openGL on Windows. Any takers?)

Tcl3D enables the 3D functionality of OpenGL and other 3D-related libraries (Cg, SDL, FTGL, GL2PS, ODE, OpenSceneGraph) at the Tcl scripting level. It comes with lots of demo programs. More info and images can be found at http://www.tcl3d.org

The Tcl3D website has a reference page [L1 ] of all supported OpenGL core and extension functions. It also shows, which functions have been deprecated with OpenGL 3.X.

The function and extension names support direct links to the official references on http://www.opengl.org .

First of all, OpenGL defines a platform-independent API for drawing objects in two or three dimensions. However, it does not define a platform-independent way to specify the window in which to draw and it specfications only include very basic objects (no circles for instance). For this reason a number of auxiliary libraries exist:

Needless to say that the GLX and AUX libraries have nothing in common, except their goal. This means that a program that uses OpenGL will have to cope with all the relevant platforms itself - though only as far as window interaction is concerned.

A further complication, especially when dealing with older X Window dispalys, is that OpenGL requires a special extension to work with OpenGL: GLX (normally a command "glXinfo" exists to inform you about the status of your X display). On MS Windows platforms, such an extension is not necessary - most computers running MS Windows have support for OpenGL, as this is a very popular platform for implementing games.

There is an alternative: the MESA library. It has the same API as the OpenGL libraries that rely on the hardware and software support, but it does not use anything special. As a consequence it is (much? noticeably?) slower.

(I have recently tried to use a very simple OpenGL program - a minimal example from the man pages - on different machines, but failed in most cases, except on an SGI workstation. The reason is unclear to me, but it does make me a bit scared - alas! All these problems were caused in one of the calls to X Window routines: some gave a coredump, some produced X errors)

Perhaps a word or two on the programming model:

The 2D and 3D graphics is mostly handled by specifying what you want. For instance:

This type of code is found in the drawing routine that is called when the window containing the OpenGL picture needs refreshing. All kinds of shortcuts exist (making a display list for instance or use one of the utilities to make a more complex object), but this is the basis.

OpenGL relies heavily on matrix manipulation to move, rotate and scale the objects to be drawn:

The combination of such transformations is stored as a single operation on all the subsequent objects (by using so-called homogeneous coordinates, the translation is turned into a linear transformation too, a fourth coordinate is introduced which has the value 1 for all objects).

So an important part of OpenGL programming is the manipulation of these linear transformations.

The largest drawback of OpenGL, as far as the graphics is concerned, is that you need to have a fair understanding of low-level stuff to create a decent looking picture. But it certainly works!

Note: Something that was rather unclear in the Red Book (the standard book for starting OpenGL programmers) is the role of normal vectors to a surface. These are very important:

GWM 2004-09: NB the transforms are not essential to OpenGL - you can program a scene with the coordinates alone. Matrices make moving the objects relative to each other (anyone want a car race where the cars cannot move?) easier. Matrices also provide the perspective distortion applied when the scene is drawn, and the effective 'eye' or camera position.

Also normals (as complained about above) are transformed by any transform matrix resulting in non-unit normals if a scaling is applied. There is a setting to ensure that normals are re-set to unity, but this adds some processing overhead. Only use this if scaling is part of your transformation.

My own technique using the OpenSceneGraph (http://www.openscenegraph.org ) is to set up Tcl/Tk from the C++ coding without the call to Tk_MainLoop but calling every frame:

do while (Tcl_DoOneEvent(TCL_DONT_WAIT )); // doOneEvent returns 0 if no events were handled.

The handle tcl/tk events is placed in the Loop, usually I place this after draw has started as there are likely to be unused CPU cycles while the graphics is rendering. (OSG supplies nice things like Stereo, frustum culling, lazy state sorting, access to GLSL etc and is fast method of doing OpenGL. It is a little less suited to developing a graphical editor as objects are display listed for speed, making editing a single vertex position slower.)

I have also used TkOGL though this was jerky while a window was resized.

jcw 2004-02-12: I've built a stubs-enabled version of Tkogl 1.1 for Windows, it's available at [L2 ]. A small trick was needed to work around the fact that TkWinChildProc() is not in the stubs table. See also these posts on comp.lang.tcl [L3 ].

TV: I combined a C program with openGL/Mesa graphics, in this case under windows, but the principles would work under other OS-es: Maze in openGL om windows navigation controlled by Tcl/Tk

By using a socket (or pipe) connection, the interactions with the tcl script can be seperately programmed, and possibly run on a seperate machine, leaving the primary graphics engine free.

DKF 2005-06-06: Looking through the open issues outlined at [L4 ] I see a fair few that can actually be dealt with smartly, and others that we can surely help with (issues in bold):

Gdhe is a tool for 3D visualization of robotics applications.

It is totally programmable using the Tcl/Tk scripting language. It uses the OpenGL library to display the 3D primitives.

GDHE allows to build a 3D representation of the geometrical model of an environment and make it change with time. In order to achieve this, GDHE acts as a server that receives requests from a set of client processes. These requests describe the evolution of the model. Clients can be either modules that control a real system and that send data about the state of this system or simulation processes producing a simulated state of a virtual system. 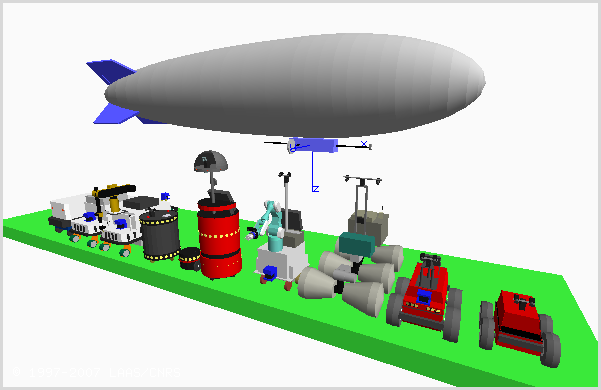 OpenGL with C and Tcl/Tk : a simple widget from scratch (updated 2017 - supports Windows and Linux X11)

The Tcl-FAQ provided related information in its time.