I recently purchased a new desktop computer for home use that has a Core 2 Quad processor. Every once in a while I would use the task manager to see if more than one core was working and I seldom found processor using more than one core. This started to make me feel like a Ferrari owner that lives in city and never has a chance to see what it can do on the highway.

I then did multiple runs on my computer using different numbers of threads to see how much time it took to process the same number of iterations. The results are shown below followed by the code (from 3 files) that I used.

The following pictures were taken from the task manager on my PC. My comments assume that the tcl control procedure (which is also a thread) isn't using a core to enough to affect the results since it is just waiting for the other threads to complete.

This first plot was taken from a test using 1 thread. It appears that the thread was probably run on core 3 but there also is activity on other cores.

This plot was taken from a test using 2 theads. The thread appear to have run on cores 1 and 3 and the work pushed their usage to 100%

This plot was taken from a test using 3 theads. The thread appear to have run on cores 1 and 3 and the work pushed their usage to 100%

This plot was taken from a test using 4 theads. All cores appear to have been used and the work pushed their usage to 100%

The plot below show the effect of using threads to do work. The change from a single thread to four threads (the number of cores in my processor) is 33 seconds to 9 seconds which is about a factor of 3.5 improvement in throughput.

It is also interesting to note that adding threads above the maximum number of cores in the processor initially reduces throughput until even more threads are added. I suspect this is an artifact of the way in which the testing is performed. 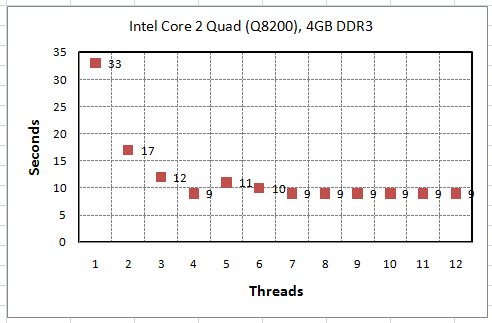 I used this make file to simplify the build and test process. After you build the code you can modify the THREADS variable and rerun the test.