Richard Suchenwirth 2002-04-07 (but brought here almost 2 years later) - In Playing 3D, first steps were taken to represent 3D objects in memory, and render them by projection on a 2D canvas. The unsatisfying part was that the positions of the "observer" were limited to curvy trajectories along the x axis, or very flat views parallel to the 3D axes. In this continuation I experiment with freely choosable observer position, so you can really "walk through" the scene, a little church on a green meadow which I call St John's chapel. Use cursor keys, possibly modified with Shift or Alt, to experiment what you can do. "+"/"-" to zoom in or out; "x", "y", "z" to see a projection along one of the main axes; "3" to return to 3D display. 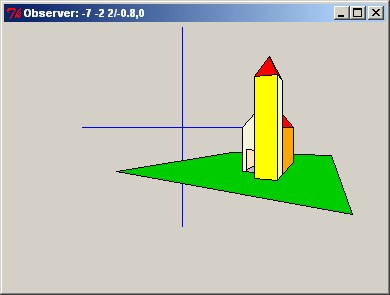 There are still many shortcomings to this code, especially when you try to walk inside the church - corrections are very welcome! I suspect the 3d'project proc has bugs, but my math books couldn't help me further...

Maybe a bit more explanation is needed. The "observer" is at the position x0,y0,z0 (elements in the 3d array); his angle of looking is stored in hy0 and hz0.

Richard, you're an absolutely brilliant programmer. What you can do in 100 lines of Tcl is just amazing. But as regards 3D, you'd be a zillion times more effective in Quake.

The Quake game engine and derivatives of it is what 99% of today's computer games are written in. And the 3D Worlds that these game engines support are fantastically accurate and realistic. They not only support 3D buildings that you can walk around in, but wallpaper, and water, and rain, and grass and flowers, and people you can interact with too.

And better still, Quake (the early but still very powerful versions of it,) are OPEN SOURCE. And even better is the way the Quake developers have implemented the entire system. In brief there's:-

Now the Quake game engines are absolutely brilliant at running/rendering the 3D Worlds. The problem with 3D Worlds is not the rendering of them - but CREATING them. Even with tools like Worldcraft, it is still a painfully tedious process.

But the MAP files that describe those worlds are ASCII TEXT files! Which of course, are easily created from Tcl/Tk. As are the GUI based tools to create/edit the descriptions of the 3D worlds in. So if you were to get onto the Net - and download the Quake compiler tools and game engine - I'm sure you'd be more effective. Forget about rendering St John's Chapel - Quake can do that. It's (efficiently) creating the 3D description that's the problem. Regards, Peter Newman.

RS: Thanks for the hint! But as so often, I was less interested in doing 3D rendering as such, but to explore what all can be done in pure-Tcl (and understand basic algorithms by that, too.) Also, a decent MAP file editor would of course have to render what you have so far (plus interactive help etc.), so rendering 3D polygons on a canvas is an issue in any case.

Peter Newman: I understand. But as regards "basic algorithms", and "what can be done in pure Tcl", we can still learn much from Quake. The Quake guys are the only people who've come up with a system for modelling and rendering a 3D world that works (and works on standard home computers - rather than special supercomputers or the like). So if you want to know about 3D, Quake is 3D 101 to 3D 501 inclusive.

There are (at least) two reasons for this:-

LIGHTING St Johns Chapel as you have it now comprises rectangular surfaces in a single colour in 3D space. To make it more realistic, you could paint textures (hand-drawn or photographs) on it. It'll look much better - but it will still look fake. To make it look real, you must take lighting into account. Any evenly-lit 3D world looks fake. If you look around at the light streaming in the window, and the resultant shadows and light and dark patches all over the room, you'll realise why. The human brain simply won't accept an evenly lit 3D world as being real. After a few years work, the Quake developers realised this - and split the Quake compiler into two parts - one to compile the 3D world for rendering, and the other to light it. In other words, rendering is only half the story. You've also got to light the 3D world.

BSP FILES: If you look at St Johns Chapel in the screenshot above, you'll note the viewer is looking at the front and right sides of the church. The back and left sides and the interior of the church are obscured, and needn't be drawn. In any given 3D world there will be hundreds if not millions of rectangular surfaces to be drawn, painted and lit. And trying to draw them all will bring even the most powerful computer to it's knees. The solution, in Quake's case, is the "Binary Space Partition" tree. That's what the BSP in BSP files stands for. It's a data structure that allows the run-time engine to rapidly identify the surfaces that need to be drawn, for any given viewer position. For a given 3D world, it can take literally hours to create this data structure (from the info. stored in the MAP file), and store it in the BSP file, so that the viewer can move around the 3D world in real-time at reasonable speed.

I just mention this because what you're doing is valuable work. If you combine your software for drawing 3D worlds on the canvas with:-

then you've got a seriously useful piece of software. But obviously, all those tools have integrate and work together.

A 3D version of your TclBrix for example - together with the above enhancements - would be most useful.}

Completely off-topic, but I noticed this page because there is a town in Durham (NE England) of that name:-

RS:-) I don't know that place, I was just instigated by a chapel model in a math book, and I named it after who might be the patron saint of Tcl/Tk...

LV: I am relatively certain that our St. John would really get a chuckle out of this.