This page is under development. Comments are welcome, but please load any comments in the comments section at the middle of the page. Please include your wiki MONIKER in your comment with the same courtesy that I will give you. Its very hard to reply intelligibly without some background of the correspondent. Thanks, gold

The previous publications by Vaiman (1963),Von Sloden (1964), and Robinson (1999) found that most sexagesimal bow coefficients were developed from a 120 degree segment of circle of 1 unit diameter. Further, the unit circle was imposed on a square grid of 1 unit by 1 unit total. The square grid can be broken down either into 4 vertical strips at 15/60 width and 1 height or into 16 squares of 15/60 on a side. The initial segment or bow figures were contained in vertical strips measured at 15/60 width and 1 height. On tablet BM15285, some of the designs show compass marks and line construction marks of a partially erased 16 square grid. BM15285-p14 shows the 16 square grid as a math problem on what is the area of a subdivided square. On clay the incised lines can be erased by rubbing with a wet thumb. Aside from the construction traces, the 16 square grid can be inferred from some figures which either follow grid lines or are placed inside subsquares or strips, like BM15285-p31, p32, and p34. On BM15285, the larger squares are 48 mm on a side and most of circles are 22 mm in diameter. Over the years of the modern era since the tablets have been discovered, there have been several comments that the designs of squares and circles and are skewed or not perpendicular. For the small scale of the designs and the medium, the designs are reasonably square and are close in scale to the older printed circuits of the 1970's. Until the invention of the Postscript language, most of the modern book designs were drawn on a drafting table and reduced photographically.

The early assumption in solving the Sumerian seed figures was that all seeds have to be placed on the rim of the circle, but there may be some wrinkles in store. The 90 deg sectors would be up to three seeds placed on the rim; the coefficients would be 0.2083 (1 seed),.4171(2 seeds),0.6666(3 seeds), 0.8332 (4 seeds) or N *0.2083, 1<=N<=4. The 120 degree sectors would be up to three seeds placed on the rim, as follows 0.2436 (1 seed),0.4872 (2 seed),0.7308(3 seed),or N*0.2436 & 1<=N<=3. Even with the confusion or corrosion in some coefficient lines, the associative principle suggests that the solutions are interrelated multiples. Also, it could be pointed out the coefficients compute the area of the seeds correctly, even if the seeds are not placed on the rim. From tablet BM15285-p40, it is found that smaller seeds ( of smaller diameter circles than the unit circle ) can be placed inside the unit square. Also, if we consider that smaller seeds can be placed inside squares and circles, the placement of seeds does not necessarily have to be placed on a circular rim. Seeds with transverses smaller than the 0.5 radius of the unit circle could be placed like roseate petals at the center of the unit circle. Some petal designs with 3,4,etc petals inside a circle have been found in designs like the 8-pealed symbol of Ishtar. It is also possible that seeds could be placed in row arrangements or randomly inside a circle or square.

The bullseye geometric figure was an annulus or ring figure defined by an inner radius of r1 and an outer radius r2 of 4*r1. Plotted on the unit circle of diameter 1 and a grid of 15/60 squares, the inner radius was (1/2)*(15/60) or decimal fraction 0.125. One line of the clay text cited the outer radius as 0.5. Somewhat inconsistently, another line listed the outer diameter of the bullseye as sexagesimal 0;53:30 or decimal 0.875. The 0;53:30 diameter was defined from the 120 degree circular segment. From the 1:4 ratio, the area of the outer circle was 16 times the area of the inner circle. Also from the 1:4 ratio, the outer area was 15*pi or roughly 3*15 or 45 times the radius of the inner circle, using the Sumerian PI or 3. There are some Sumerian math problems, where the bullseye and cylinder figures were used as a model for a brick kiln. The bullseye area times the height of the kiln was used to estimate the volume and number of bricks inside the brick kiln. The outer ring area times the height of the kiln was used to estimate the volume or amount of fuel (wood or asphalt). In the excavations of Jericho, broken ceramic pieces were found in circular pits, which might have been kilns.

The gis-za-mi (wood sound hymn) or lyre geometric figure was given in the tablets as two numbers. The lyre coefficient was sexagesimal 0;26:40 or decimal 0.444. The reference length or transverse of the lyre was sexagesimal 0:53:20 or decimal 0.8888. A corroded tablet was found with the label gis-za-mi near a figure that looked like a rectangle with two concave bow faces. A tentative rectangle can placed and estimated on the 16 square grid. The Sumerian generic area formula would be lyre area = coefficient * transverse * transverse,= 0.444*0.8888*0.8888., decimal 0.3507 or sexagesimal 0;21:3. Each component square on the grid has the area (15/60)*(15/60) or decimal 0.0625 square units.

The Sumerian trough figure has some similarities to the lyre figure, there is a bow or semicircle set into the top of a rectanguloid. Only the bare sketch is available here, the Sumerian methods are carried out as an example. Surface area and area coefficients are inferences beyond the bare sketch. From the sketch, the trough figure can be modeled on the 16 square unit grid of overall length L (eg 1.0) . The semicircle has a diameter of (30/60)*L and reaches (15/60)*L into the top of the square. There is a length of (45/60)*L between the bottom of the semicircle and the base of the square figure. The area of the trough figure is L*L-area of semicircle, L*L-pi*diameter*diameter/8,1*1-pi*.5*.5/8, 1.-0.0982 or decimal 0.902 square units. The trough area coefficient would be area / (reference length * length), 0.902/(1.*1.), or decimal 0.902 square units. For another inference, the trough figure is pretty close to a unit square of side L. The square area coefficient would be L*L / (reference length * length), (1.*1.)/(1.*1.), or decimal 1.0 (ref. Friberg, 1987-90). There were several kinds of lyres and there were lyres with square sound boxes pictured on Greek coins. The semicircle or trough allowed the fingers better access to the lower part of the strings.

The coefficient list has a bucket coefficient as 0;45 or decimal 45/60. Making assumptions, the bucket had a diameter of 1 and a height of 1. Using 3 for pi, the bucket volume would be (3*diameter*diameter/4)*diameter, (3/4*diameter cubed, or (45/60)*diameter cubed. Here a problem text is needed to find out if the bucket was used as a quantity or formula. Several problems have the one man assignment for removing soil as 20/60 of a gar*gar*kus(volume unit), but context of buckets is uncertain. A silitum or heap of soil is 20/60 sar volume, which appears to be the work assignment of one man. Since a Sumerian yoke load would be 2 talents or 60000 grams in modern units, a single bucket or basket probably carried 30000 grams at least. An Egyptian artabe held 37.78 liters, equivalent to 30.28 kg of wheat. A Babylonian panu was 36 liters or 28.85 kg of wheat. In lieu of more specific texts, a Sumerian bucket or basket (dusu,gis-u-sub,pisannu) was probably between 30 and 36 liters, water equivalent between 30 and 36 kilograms.

The subdivided square is called the quincunx diamond, which was also known among the ancient Chinese and Mayans. Quincunx means 5 portions, counting the center and 4 cardinal directions. Sometimes, the Mayans oriented the quincunx was oriented to the four points of the equinox(2) and the solitice(2). Among the Mayans, the 2 solar overhead or crossover points were sometimes added to include 7 points.

The key to understanding many of tbe Sumerian geometric coefficients and figures is the 16 square grid with the unit square and unit circle. Even some enigmatic figures turn out to be based on the 16 square grid. The complex knot design was found on the back of a clay tablet, perhaps as a decorative book cover. The freehand drawing contains many visual illusions. Some parts of the decorative knot overlay the 16 square grid, including the rope straight lines and turns.

# An extreme testcase would be a segment angle equaling nearly 180 degrees, segment area equaling nearly a half circle area, and double segment equaling nearly the area of a circle. The exact solutions for a 0.5r circle segment (eg. a semicircle ) can be cut and pasted into the report window of the eTCL console.

The small TCL procedure pi has to be loaded in first to supply a value of pi, 3.14. The extra significant figures are kept beyond the usual 4 for comparison with the eTCL calculator results.

Ref., Neugebauer and A. Sachs, plus Robson, Eleanor, Mesopotamian Mathematics

Notes: These coefficients are partly from the coefficient list and partly from estimates from figures graphed on clay tablets. There was definitely more that one kind of ship type and more than one kind of lyre type. Question mark means uncertain, label not found on tablet, or term rarely found on tablets. Tilde sign (~) means estimated from other numbers. Units refer to unit square of side 1.0 and unit circle with diameter of 1.0. The coefficients of 1 for rectangle and square may seem trivial, but were used as essential unit conversions to Sumerian metrological standards tables ). 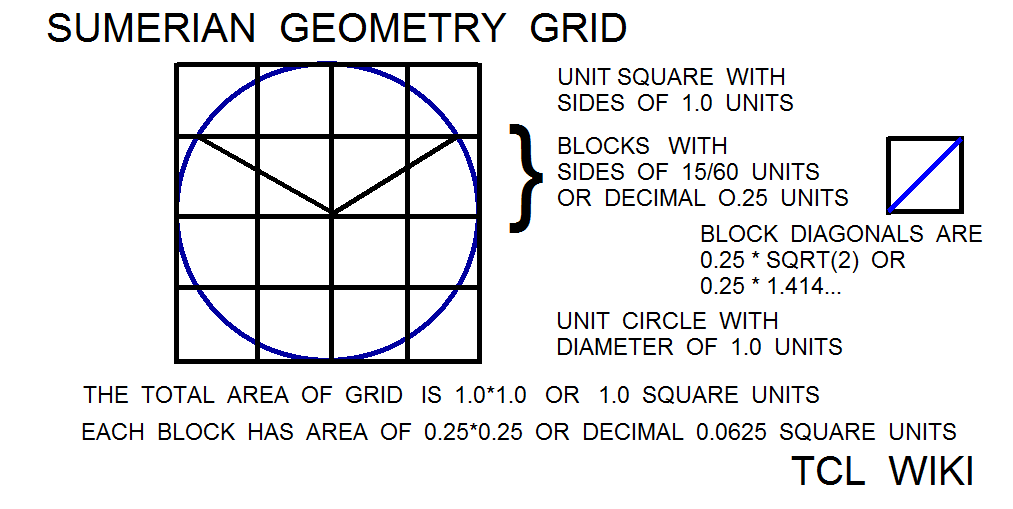 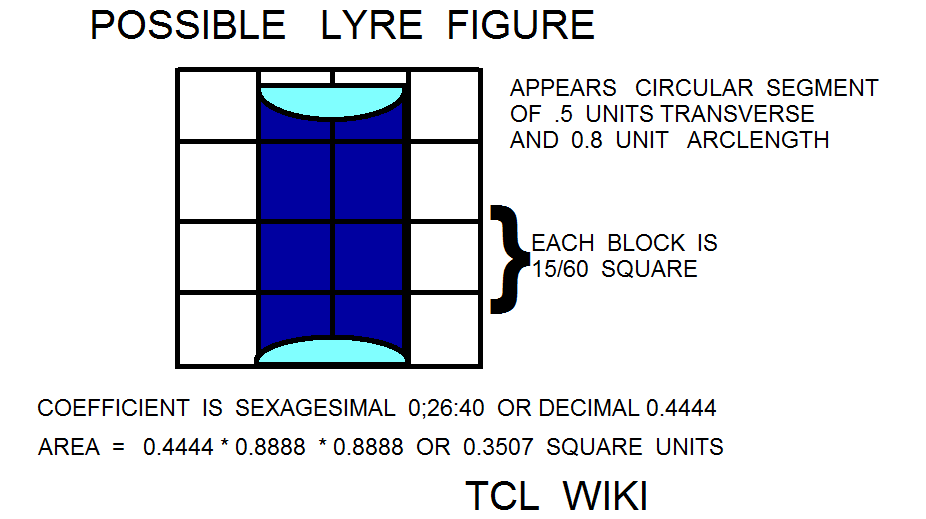 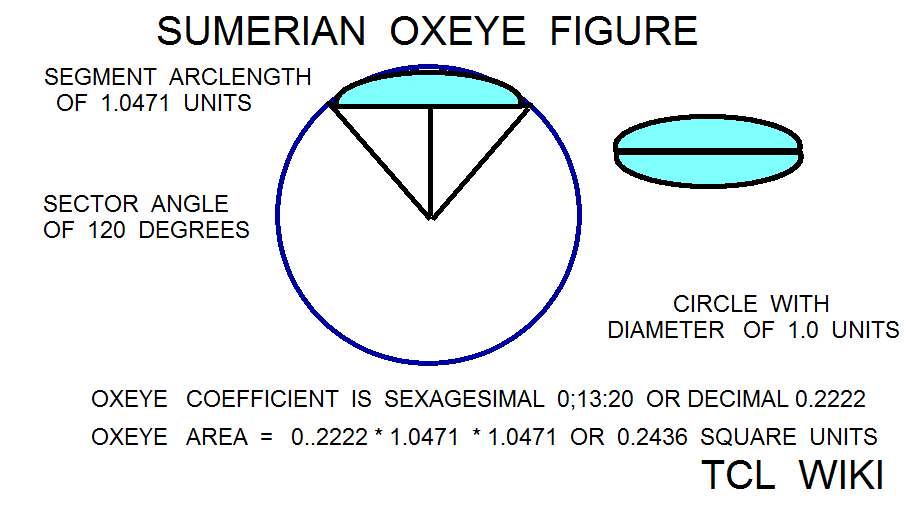 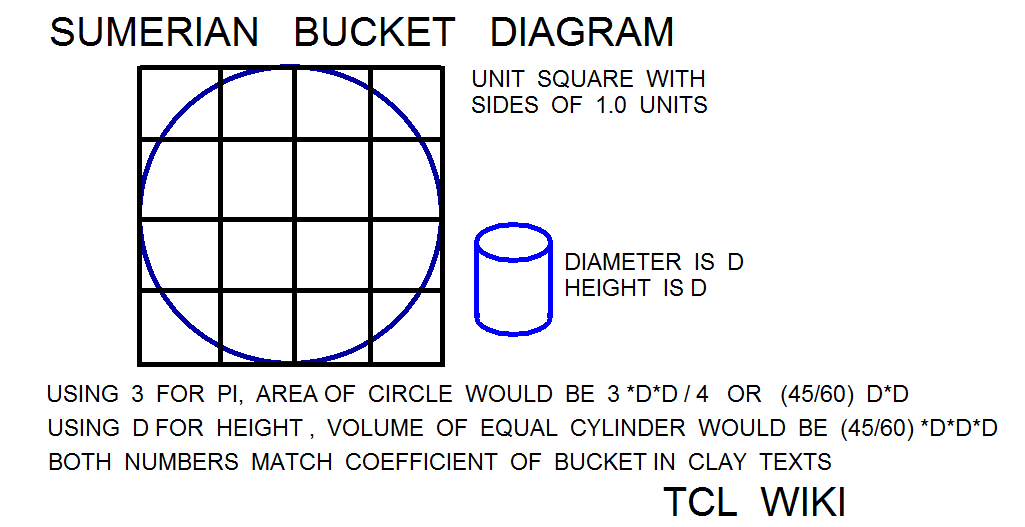 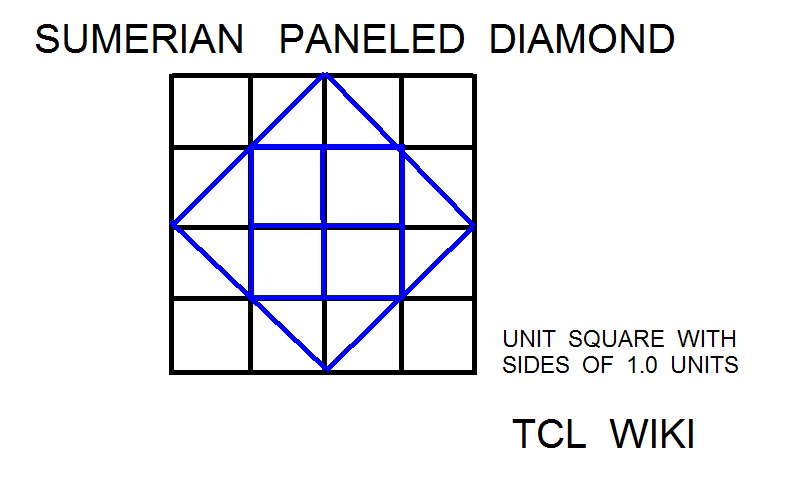 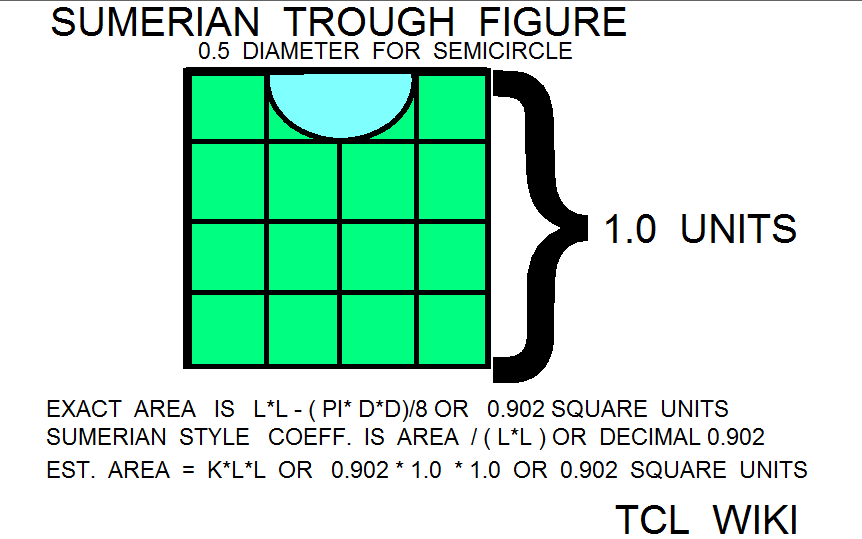 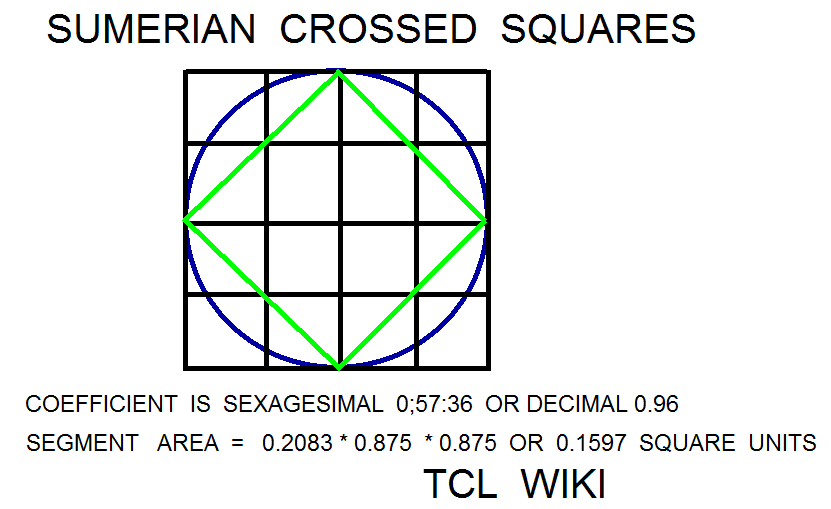 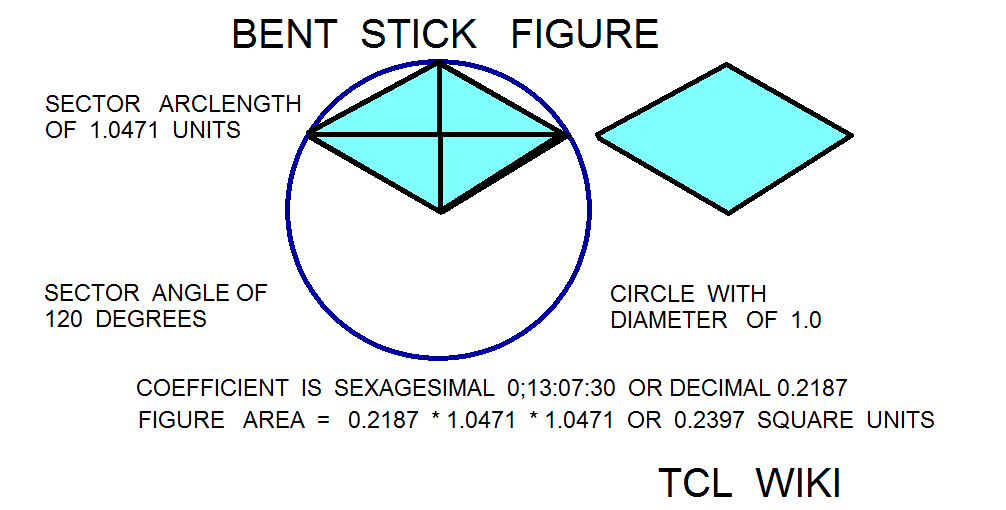 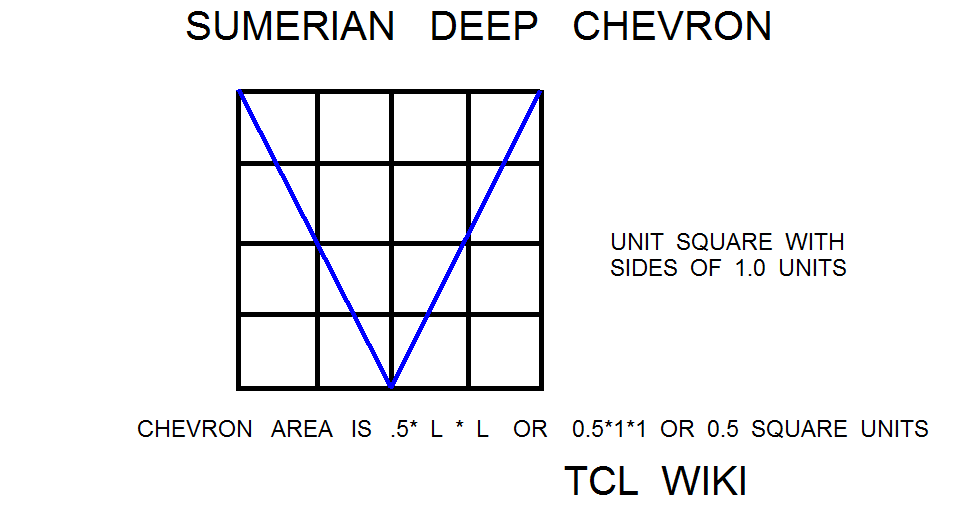 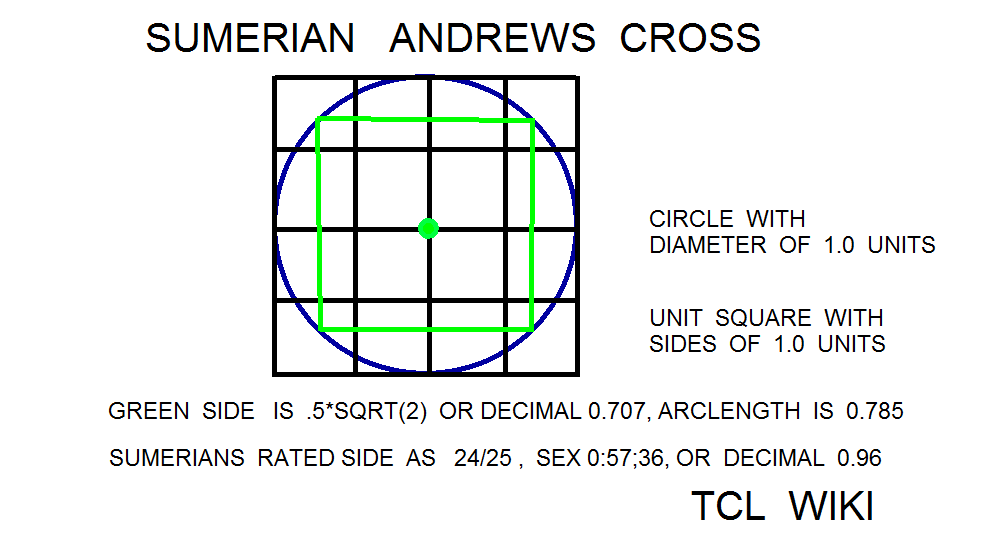 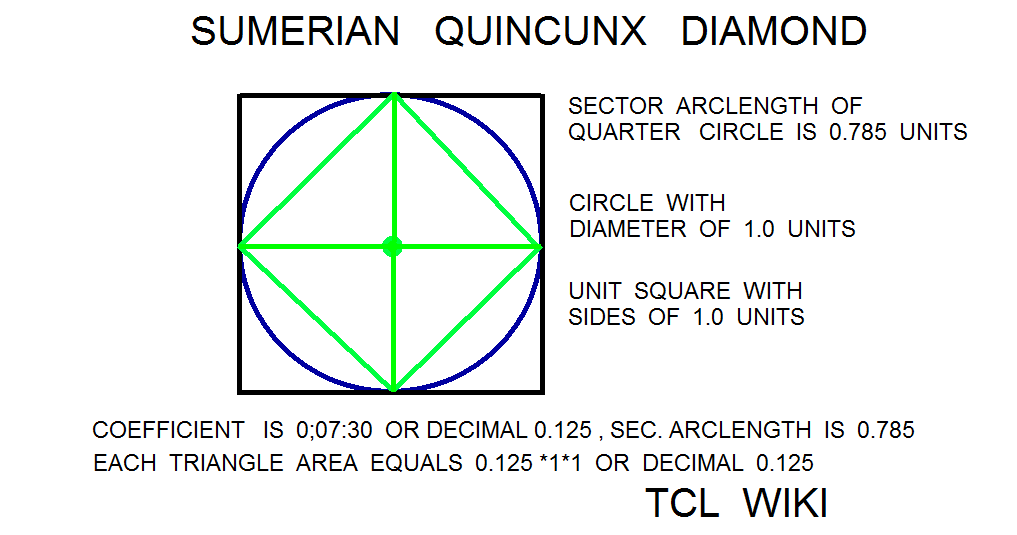 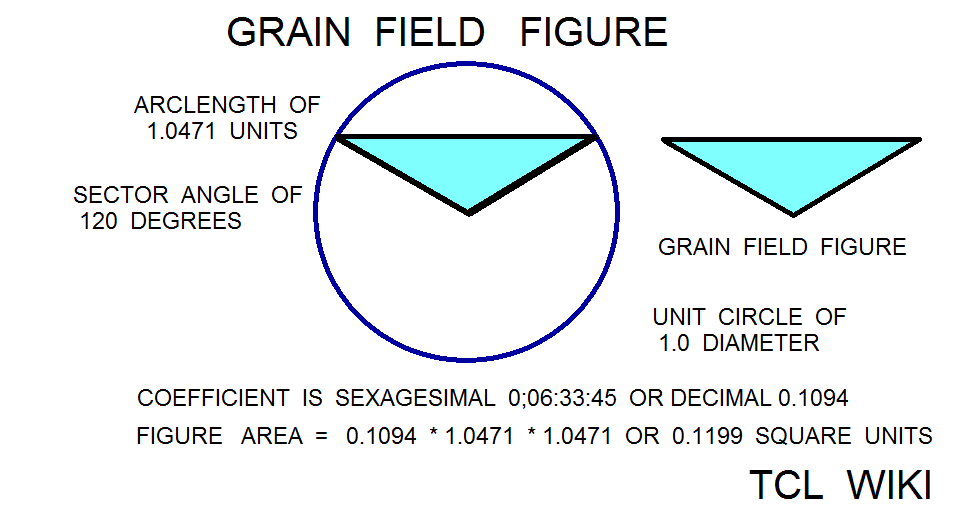 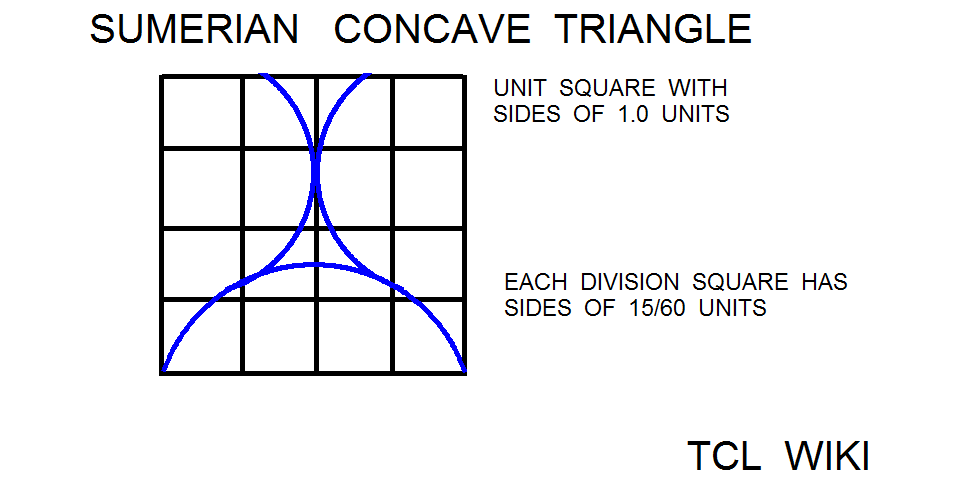 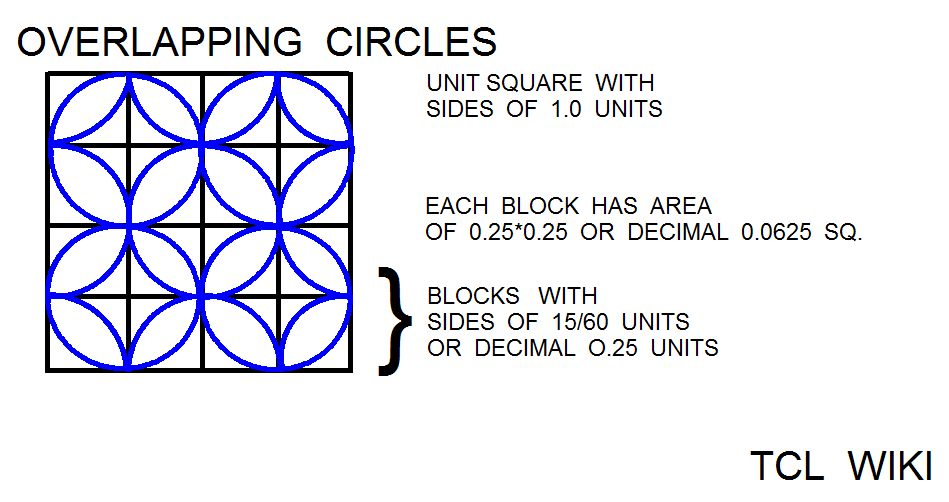 gold Received from phd candidate
Unit circle will not fit into unit square. Unit circle has radius of 1, vis. your circle of 0.5. Maybe, your circle should be called half unit circle.

For the push buttons, the recommended procedure is push testcase and fill frame, change first three entries etc, push solve, and then push report. Report allows copy and paste from console. While the testcases are in meters, the units cancel out in the calculator equations. So the units could be entered as inches, Indian yojanams, Sumerian cubits, or Chinese inches. This is an advantage since the units in the ancient Sumerian, Indian, and Chinese texts are open to question.