The 'mapproj' package in tcllib contains the conversions between geodetic (See geodesy) and map co-ordinates for a variety of map projections. A large number of projections are supported, because different applications have different needs.

The mapproj manual gives a discussion of the choice of projections. Here is a review that attempts to illustrate some of the major points.

First: What sort of data are you displaying?

Second: What scale is your map?

For any cylindrical equal-area projection, there will be one latitude (or rather, a pair of equal latitudes, North and South) where landforms are preserved. Above the standard latitude, landforms will be stretched east to west. Below it, they will be stretched north to south.

The Lambert cylindrical equal-area projection is a cylindrical equal-area projection with a standard latitude of the Equator. It preserves equatorial landforms especially well but distorts the temperate and polar regions. It is well suited to thematic maps of countries such as Indonesia that lie near the Equator and extend primarily east and west.

The Behrmann projection is a cylindrical equal-area projection with a standard latitude of ±30°. It is a compromise between equatorial and temperate regions but still gives considerable distortions at high latitudes. It's a reasonable choice for thematic world maps if a rectangular display is desired. 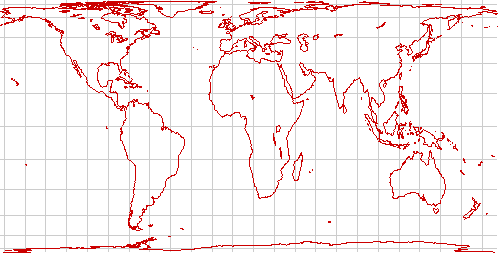 The Trystan Edwards and Hobo-Dyer projections are almost identical. (one has a standard latitude of ±37.4° while the other has ±37.5°) They attempt to give better landforms in the temperate regions without sacrificing too much fidelity in the equatorial regions. It's a good choice for thematic world maps if a rectangular display is desired. 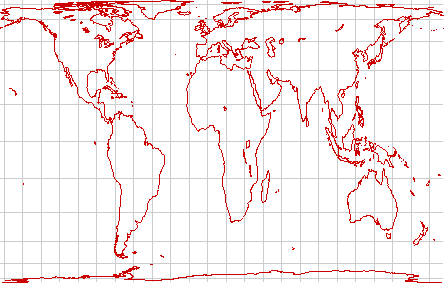 The Gall-Peters projection has a standard latitude of ±45°. It attempts to preserve temperate zone landforms, but stretches the equatorial regions considerably. Thematic maps whose emphasis is primarily the temperate regions show well on this projection. 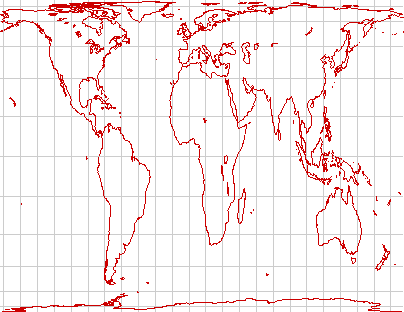 The Balthasart projection, with its standard latitude of ±50°, is unabashedly Eurocentric. It preserves the landforms of Europe, Canada, Argentina and New Zealand quite well, but distorts much of the rest of the globe. 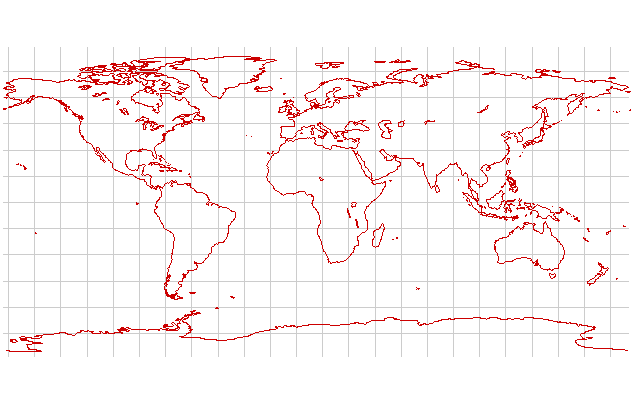 The cylindrical equidistant projection is also known as the plate carrée In it, all lines of latitude and longitude are vertical and horizontal; its North-South scale is consistent across the entire map. It is chiefly of historical interest because it is one of the easiest projections to construct. It is also still useful for large-area maps of equatorial regions that run primarily east and west. It's a poor choice for world maps because it preserves neither landforms nor areas especially well. 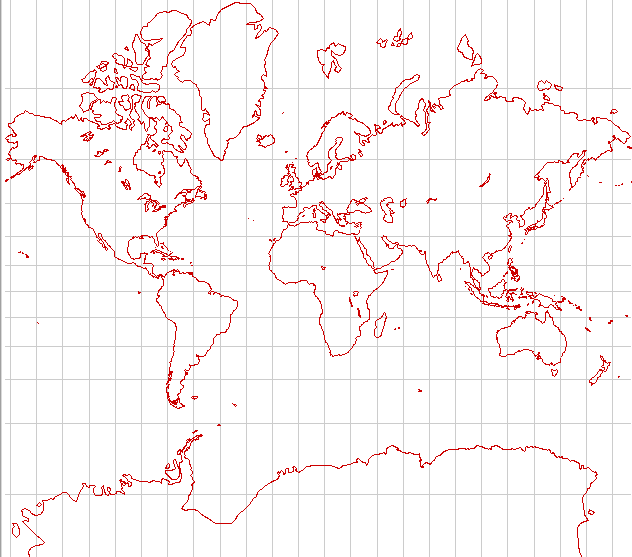 In times gone by, the Mercator projection was seen in grade-school classroms throughout the globe. It is a conformal projection; that is, it preserves the local shape of landforms. It also has one property that was indispensible in the days of sail; a straight line on the map represents a constant compass course. (It is not a great circle, unless it is the Equator or a meridian!) Those properties make it useful for some special purposes, but its gross area distortions (showing Greenland as larger than South America, for instance) make it a poor choice as a world map. 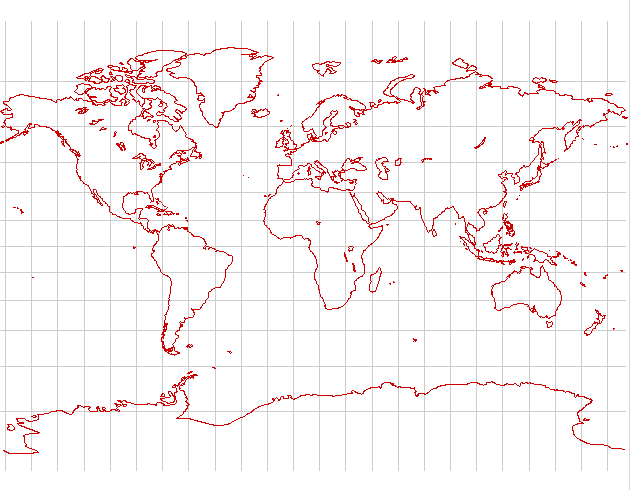 The Miller cylindrical projection is an attempt to preserve the appearance of the traditional Mercator map while mitigating the most extreme distortions in the polar regions. Except for the fact that it gives a traditional look to the map, it's not very useful; it's perhaps best suited to maps that will be treated as works of art.

A number of projections derived from the cylindrical projection are useful for large-area (and world maps). 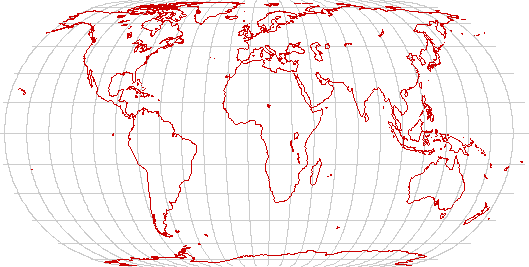 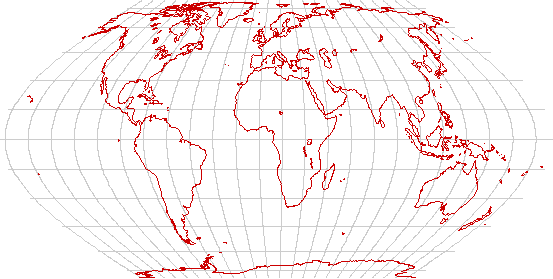 The Eckert IV and Eckert VI projections are equal-area projections that represent the Poles by straight lines half the length of the Equator. Eckert IV represents meridians by semi-ellipses, while Eckert VI represents them with sinusoids. Both are good compromise projections for use in maps of the world, giving considerable less landform distortion than any of the cylindrical projections while still preserving areas. 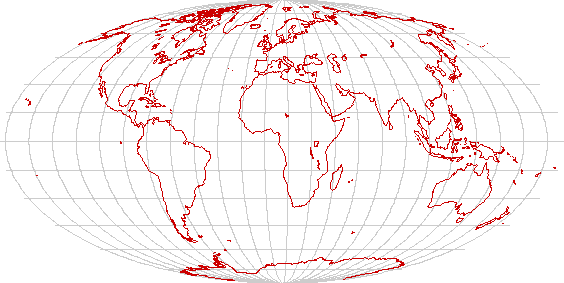 The Mollweide projection is an equal-area projection that represents the poles as points and the meridians as semiellipses. It is an equal area projection (achieved by distorting the scale of latitudes). Its scale is correct only at the center of the map.

It is another useful compromise world map, making a good tradeoff on landforms. It is especially popular in interrupted form, where the projection is interrupted in the oceans in order to show the continents more accurately. Half a Mollweide map can give an attractive circular map of a hemisphere. 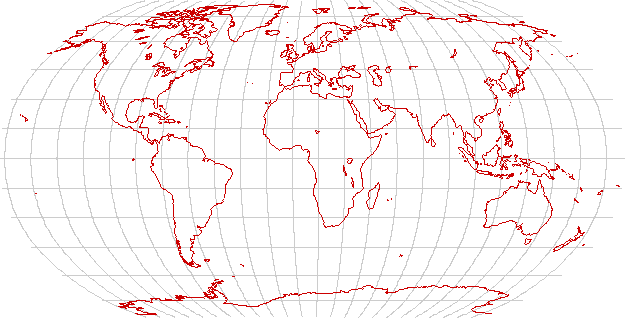 The Robinson projection is neither conformal, nor equidistant, nor equal-area. It is defined by interpolation in a table, rather than by mathematical functions. It is designed to be a good compromise for global political maps, since country boundaries anywhere in the world are reasonably clearly represented on it. It is undeniably useful for that purpose.

The sinusoidal projection is an equal-area projection where the Poles are represented as points, the meridians as sinusoids, and the parallels as equally spaced straight lines. It is somewhat unattractive as a world map, but (like the Mollweide projection) looks considerably better in interrupted form. It is also effective for thematic presentation of large equatorial regions with a predominantly north-south extent; the Nile valley (or even the whole of Africa) would show well on it. Even Argentina or Norway would not look bad on it, although they would probably show better with the Cassini projection. 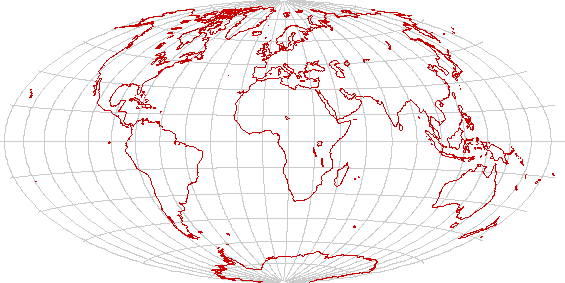 In azimuthal projections, the great circle heading from the center of the map to any other point is preseved. These maps are often the maps of choice for small-area maps. They also are useful for the polar regions (where cylindrical projections are nearly useless) and for special purposes such as antenna pointing and great circle navigation. 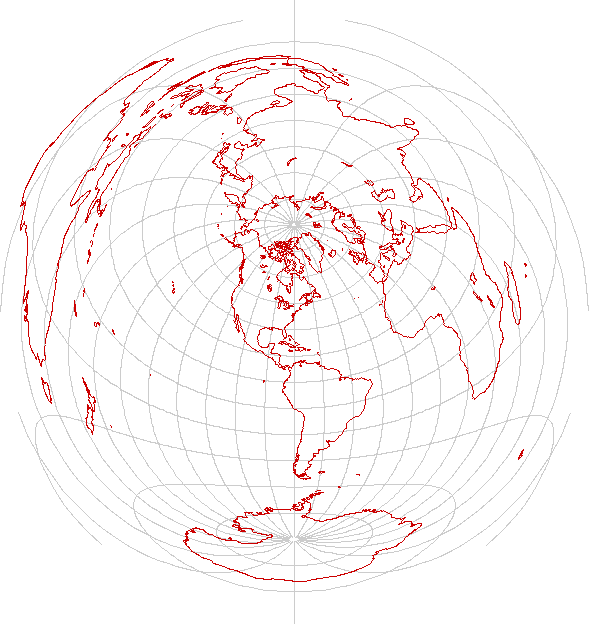 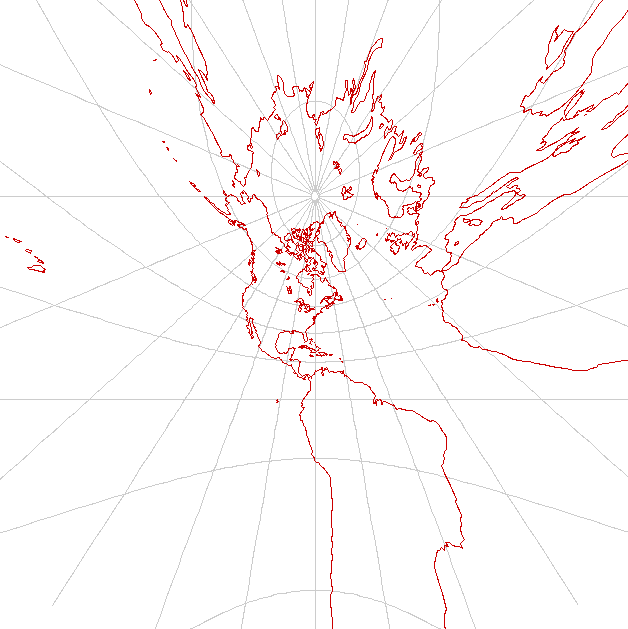 The gnomonic projection is an azimuthal projection having the unique property that all great circles are represented as straight lines. It therefore allows the shortest path between two points to be plotted with a simple straightedge. The price of this property is that the gnomonic projection can represent only areas much smaller than a hemisphere, and has the worst distortion of landforms and areas of any projection in common use. 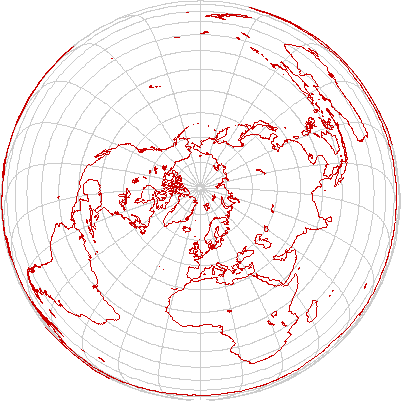 The Lambert azimuthal equal area projection preserves land areas. It is an excellent choice for thematic maps of the polar regions. 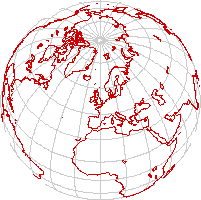 The orthographic projection presents a view of the globe as seen from infinitely far away. It's perhaps of greatest value as a curiosity. But it does make pretty pictures of globes. 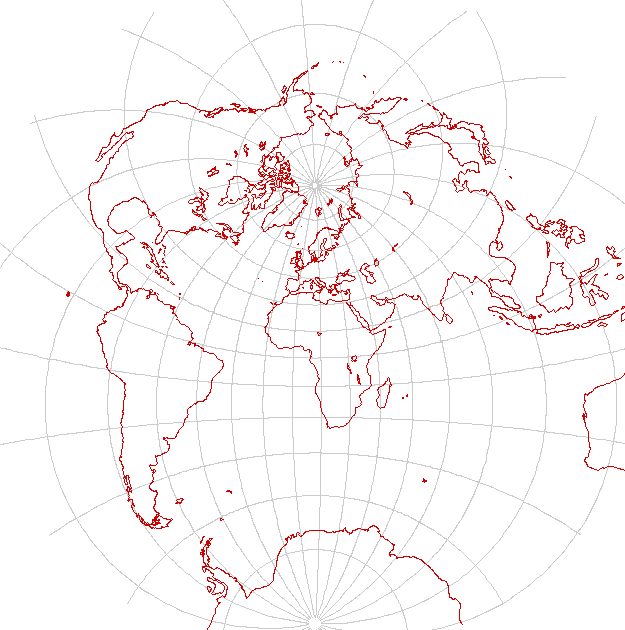 The stereographic projection is an azimuthal projection that is also conformal: that is, it preserves the shape of any small region of the world. It shares with all conformal projections the problem that regions near the edge of the map have colossal area distortions.

Conic projections show meridians as straight lines intersecting at one of the Poles. They are popular choices for maps on the scale of continents. 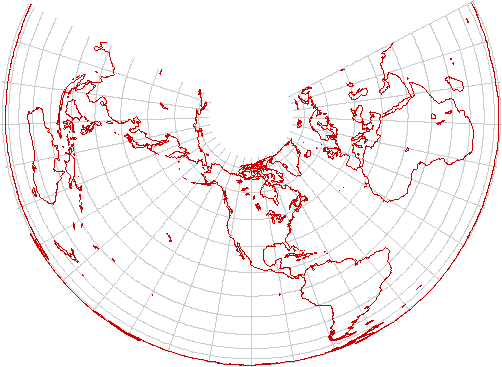 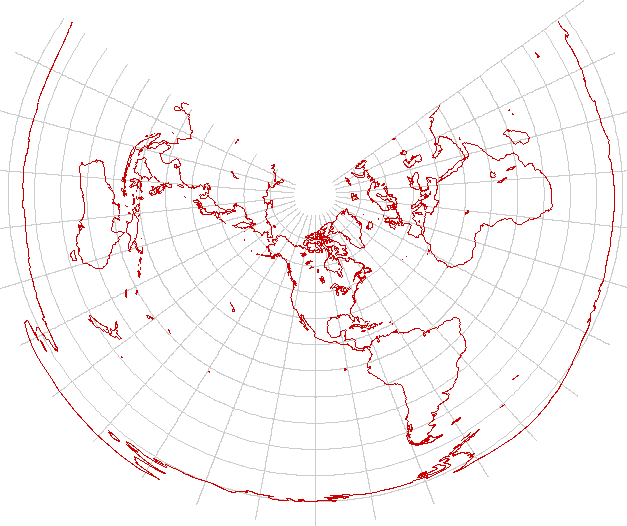 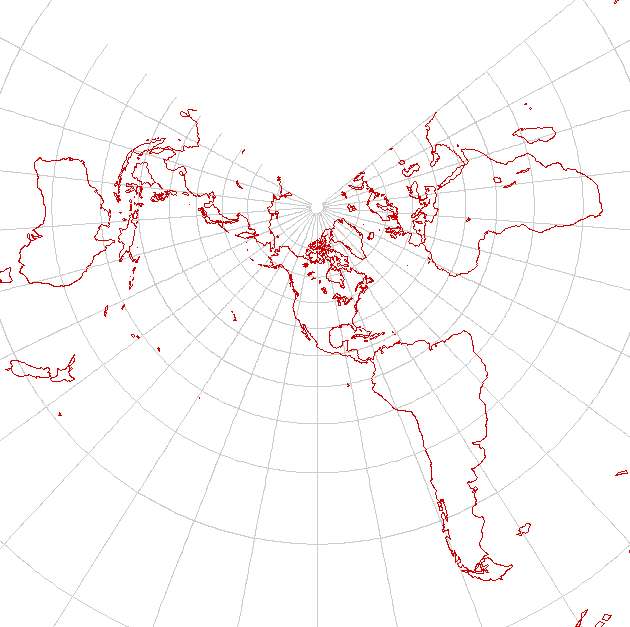 The mapproj package implements no polyconic projections at present. At least the North American Polyconic should be done, because a great many older US Geologic Survey maps use this projection. 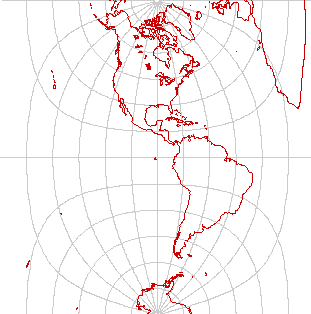 The Cassini projection is analogous to the cylindrical equidistant projection, except that it is projected from a standard meridian, instead of from the equator. It is not equal-area or conformal, but it gives excellent representation of any region that has a predominantly north-south extent, and is nearly ideal for maps of countries such as Norway, Argentine and Chile. It is also a popular choice for rectangular maps of the Americas, as shown here.

The Universal Transverse Mercator is another projection that is needed in the library and not yet implemented. It is used by the classic "One in a Million Map" (a map of the entire Earth at 1:1,000,000 scale) and the World Aeronautical Charts. 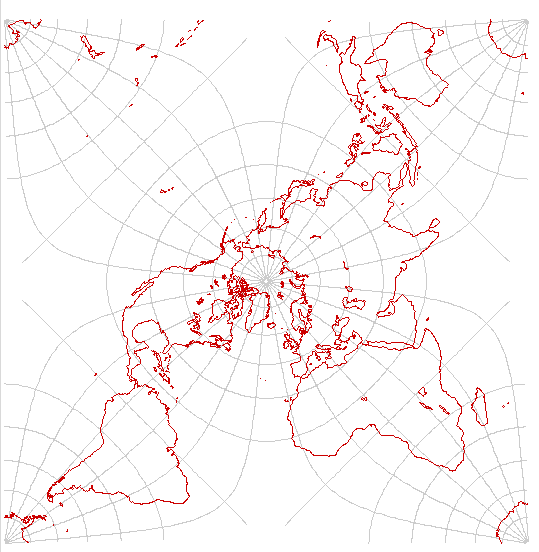 The Peirce quincuncial projection is an unusual projection of the globe into a square. When parameters are chosen properly, no major land mass is horribly distorted. The projection has the odd feature that it tiles the plane: moving out the side of the Peirce projection moves into an adjacent point on an identical (but inverted) tile. The projection deserves to be better known than it is.

KBK Are you volunteering to add it to tcllib?

AMG: Naah, I haven't done anything with it yet except stare at this animation. :^) I do have a project in mind that would benefit from it, but unfortunately the project is non-Tcl/Tk, and it'll probably be a long time before I get assigned back to that project. If I get a chance to implement it there, I might consider contributing it to tcllib as well. I'd also love to integrate Tcl/Tk. :^)

DKF: The Stereographic Projection has the property of mapping great circles to circles (potentially of infinite size, when the great circle passes through the projection origin).