bll 2016-4-26. This code provides an alternative styling of ttk::checkbutton as a toggle switch. This style of switch is becoming more common in user interfaces. There are currently 13 different switch styles in order to support the 30 different ttk themes. The package will select a toggle switch style upon load, and a bind to <<ThemeChanged>> sets it when the theme is changed.

The user can set any of the themes as a default and can use multiple themes.

The package should be "required" after tk scaling is set

bll 2016-5-2. I have updated the package to include multiple sizes of images and depending on the tk scaling value, it changes which set of images gets displayed. No idea if I got the scaling quite right, but a quick test looks ok. 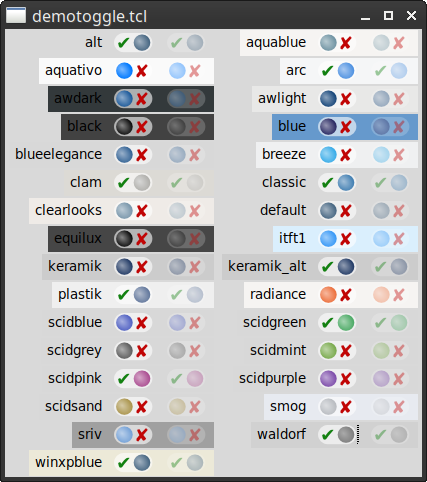 aspect 2016-04-28: beautiful widget and a very nice example of how to do custom layout with ttk. One question - is there any particular reason you excluded Checkbutton.focus from the layout? I much prefer having it to aid keyboard navigation & accessibility. Adding it back as a parent of the new indicator element seems to work, but I've only tested very roughly with the provided demo.

bll 2016-4-27: I copied a layout from another theme. Sorry, did not check the original. I have updated the code below to match the default ttk::checkbutton.

JOB Thank you bll for providing the source. Just like to let you know, that there is something going wrong with the images provided in the package.

Running on windows with a plain ActiveState installation.

bll 2015-5-3: Let me research this. It works for me in some instances and not others. This is quite odd. It works as part of my application, but it does not work as a standalone script. I found this:

And ActiveState still doesn't have 8.6.5 out.

I have updated the code to require the Img package for Tcl <8.6.5.

I downloaded the source code and the demo works fine. Some variants look rather similar, but that may be my display.

bll 2016-5-3: I think it is how I wrote the demo code. It lists the 7 styles (variants), then displays the toggle switch that would be displayed for any themes that are loaded. Which, being standard themes, all use the same style/variant.

JOB - 2016-05-03 Downloaded again and it works flawlessly on windows. I got more adventurous and tested it on OSX too, but here the checkbutton is only a grey box. Have not investigated any further. Looks on windows very promising. Thank you very much bll.