CrowTDE is an open-source Tcl/Tk development environment written in Tcl/Tk. Its purpose is to provide a convenient environment for Tcl/Tk programmers. Currently CrowTDE runs on Linux and Microsoft Windows, while we are try to retrofit further versions which will run on more platforms as well as more features in the near future. Hope you will like it.

The following information is obsolete, but is kept here for historical purproses

MEd: Hm, I created a new project and now get an error when I try to add a blank File (File -> New -> Blank): Error: invalid command name "::inputDlg::show" It now works after I added package require inputDlg to CrowTDE.tcl

CrowMan Thanks, the bug already fixed.

escargo 2006-03-06: This is interesting, but does it really need to have threading? What features would need to be excluded if no threading is available? (I probably don't need an integral MP3 player ;-)

CrowMan: If no threading: Proc explore, Syntax-highlighting and some features will fail.

I have a tdom 0.81 version, but it is single-threaded and ... the www.tdom.org website only provides "old" sources or DLLs of the version 0.80. Perhabs someone can send me per eMail the current, multi-threaded version?

But know there is an error during startup:

CrowMan: Can I know what version of Tcl/Tk you have? What is't your Tktreectrl version?

CrowMan 2006-04-27: I had to try creating CrowTDE-starkit and running with dqkit (on WinXP). It can run but has some troubles. Can someone help me ?

How to Install On Linux

How to Install On Microsoft Windows 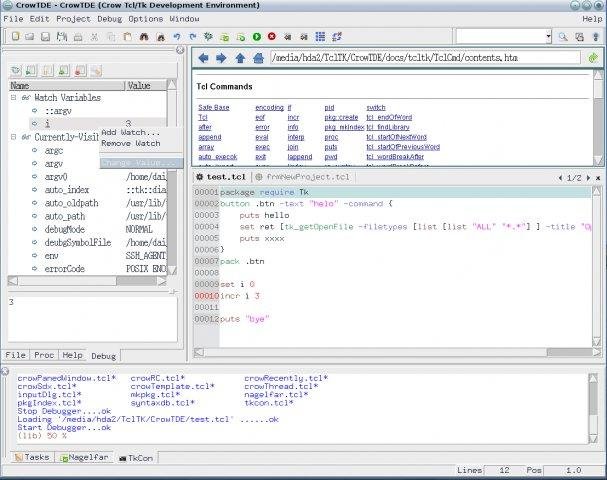 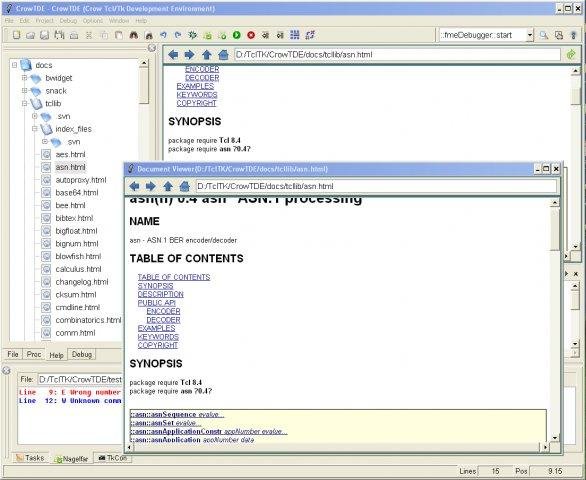 RLH: While I wouldn't want an mp3 player...it looks nice.

CrowMan: If you have not install snack library, mp3 player will disabled itself.

schlenk 2006-04-15: I played a bit with CrowTDE and found it really nice and with a polished UI but missed some of the nice features from ASED. Suggestions:

MEd 2006-04-15: Have you ever thought about creating a CrowTDE-starpack? Would make the application even more attractive - at least for me ;-)

What about a starkit?

UKo 2006-04-27: to try out CrowTDE on linux without changing my global tcl installation I tried to run it with the help of tclkit. After finding a threaded version with dqkit I have to make only a small change to make CrowTDE run smoothly.

I don't know why, but dqkit gives a memory access error when loading package img::png but tkpng runs just fine and works with CrowTDE. So I copied the package to lib, replaced the reference to img::png in lib/crowImg.tcl with tkpng and removed the one from CrowTDE.tcl -- and it worked!

GJS: Great editor, I just have a couple suggestions.

What about making the help load in the tabs, the same area as the editor windows, and making it so you can raise the tabs to the desktop so you can view a document in the main TDE window and one in a separate toplevel child. this would be especially nice with multiple monitors. It would allow you to put the help on one monitor and the editor on the other monitor.

It would also be nice to be able to reorder tasks, or have a task priority, and to be able to hide finished tasks, and search tasks. Task state could be "Not Started", "In Progress", and "Finished".

schlenk 2006-04-29: Some more suggestions and some small noticed errors.

and then parse that for arguments and options.

CrowMan 2006-04-29: Thanks your suggestions. First, we will to fix the "4 spaces of Tab", "single file save/save as", "delete file" and "argc argv" problems. Others functions for TDE, we will addition to near future version.

Maybe this is not the appropriate place to do this (a bug reporting and tracking ala sourceforge would be excellent). I noticed that with ActiveTcl 8.4.12 running version 0.4.2 (starkit version) there was a wish window raised/un-raised. I found that changing the Options->Proc Details->Refresh Interval would change how often it happens. Note that this is only when the edit panel is open with some text. Otherwise, I love CrowTDE, kudos for this excellent work.

CrowMan 2006-07-26: Thanks your report. The problem is because you choose a not appropriate "Tcl Interpreter". Please go to "Options -> Settings- > General / Tcl Interpreter" and make sure setting is correct. (do not use wish or starkit)

pcam 2006-07-26: Thanks CrowMan, that was it. Will there be any bug report/tracking and maybe contributing placeholder. I'd be willing to help (translate in French and more).

CrowMan 2006-07-26 : Thanks pcam. I need your help to translate in French if you willing. Maybe you can mailto: [email protected]

I just downloaded the last current installation and tried a bit, but there are some questions:

Thanks and hold on this quite good IDE - Martin

thanks for your reaction!

Bye and a nice weekend!

RLH: In looking at some of the screenshots, a suggestion I would make when creating your own dialogs...make the buttons the same width so they look uniform.

RJM I installed CrowTDE (Windows XP). It works quite fine. However, I did not find a feature of updating single procs in a running script. Upon desire, I could contribute to such a feature (dependent on how the debug communication path is realized).