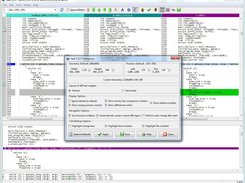 escargo 28 Feb 2003 - When I downloaded tkdiff 3.09 and ran it on windows it blew up. The problem appears to be the grid commands at lines 5953 and 5967. They use a "-pad" argument that was not understood by my ActiveTcl 8.4.1 installation. Looking at HTML man pages as far back as tk 4.2, there was no "-pad" option. I don't know how this code worked before. Maybe there was a regression in tolerant code before, but I replaced the "-pad 4" with "-padx 4 -pady 4" and the application ran again.

before the call to main.

escargo 13 Nov 2003 - The correct function of tkdiff depends on the diff program that is used. I am using ActiveTcl 8.4.4, and I am running into problems with diff not behaving as the tkdiff program expects. The first problem was that temporary files were created in a file name that used the value of the environment variable TEMP (or perhaps TMP), which in Windows contains backslashes. When I temporarily put the temp directory as the volume root (that is, C:), diff failed differently. Is this a known problem? (Is there a known solution?)

LV What system and what diff are you using? That probably is the best place to begin. Also, you might sign up for the tkdiff mailing list - the experts there are most likely the ones most able to help.

TSBG 2003-11-16 : I had the same problem. I have made a patched version of tkdiff-4.0b2 which you can get from http://homepage.hispeed.ch/tsbg/tkdiff-4.0b2.zip . Please try it out. The diff program from accurev works ok for me.

escargo 17 Nov 2003 - This solved the problem for me; there are certainly interesting differences between tkdiff 3.09 and 4.0b2. (Interestingly, the tkdiff.kit mentioned below has the same problem as 3.09.) - now fixed, thx -jcw -- The good news, it works now; the bad news, it's not cleaning up temporary files when it's done. - escargo

I've updated tkdiff.kit in sdarchive to 4.0b2 - when renamed to "tkdiff" and placed in the path, it works fine with Keith Vetter's Wiki History Diff script -jcw

escargo 26 Mar 2004 - The info button in the sdarchive has dates for 2002; that would seem to be out of date relative to the notice above. Plus, tkdiff 4.0 was announced on freshmeat.net on 25 Mar 2004. The starkit should be updated (and then this comment removed).

You might try updating the starkit yourself, then emailing jcw to ask whether he would like to have the updated version...

the big fat .dmg immediately exits on my OSX system, perhaps a clash with the built-in tcl?

Any rate, using the small tkdiff for unix and placing it in /usr/local/bin/tkdiff on OSX works just dandy, and starts up quickly.

Now I'm trying to fiddle with the source to make the window appear in the foreground and a lot larger...

Is there a way to configure tkdiff to only display the specific difference within a line, rather than highlighting the entire line?

While I don't believe that tkdiff is supporting the festure you are asking for, I know that eskil does, and has, IIRC, this mode of display active as default.

Can i include tkdiff in my starpack wherein if i call the tkdiff from my tcl application it works.

Including the source of tkdiff within a starpack would be possible, but:

Under windows you would need to copy diff.exe onto the vfs of the starkit and use another package, e.g. like: Executing programs which are shipped within starpacks to execute this supplemental command at runtime "from outsiede" the starkit. To get this to work, you need to slightliy change the orig. tkdiff code. I am using DirDiff [L1 ] (as a starpack) where I have exactly the same problem and as a workaround I use the DirDiff.exe as well as the diff.exe all together stored in the same directory.