This page is under development. Comments are welcome, but please load any comments in the comments section at the bottom of the page. Please include your wiki MONIKER and date in your comment with the same courtesy that I will give you. Aside from your courtesy, your wiki MONIKER and date as a signature and minimal good faith of any internet post are the rules of this TCL-WIKI. Its very hard to reply reasonably without some background of the correspondent on his WIKI bio page. Thanks, gold

Here is some eTCL starter code for Game Kingdom of Strategy. There is a post on wiki asking for a TCL version of a text and strategy game, originally in basic language. See Ideas for Projects in Tcl/Tk. I am trying to find out the status of the old game. A strategy game can be cobbled from older scraps of Iching_Fortunes code. Using the Iching code, this page presents a trial console version for testing the concept, a console version, and a canvas version with some graphics. The Iching has a good handle on the actions of an ancient kingdom, though in a random scattered pattern. The elements in most adventure games are random generators, castles, tiled game boards, mazes, wildcards, gamepieces, and strategy situation.

The canvas and buttons presented here are largely based on the Simple Canvas Demo by HJG. The random pick algorithm was posted by Suchenworth RS on Horseracing in Tcl. Another source of randomness was A funny cookbook.

In pseudocode, the text adventure game is essentially a three line program in the old style unix wish. In etcl and windows, some buffering may be necessary. One display for response and one display for input would be easier in windows.

In the trial deck for console, the advisor would present the situation and the king's responses would have to be a table of abbreviated commands, like buy 200 or sell 300. Otherwise, there would be a lot difficult parsing, like the human language command of computers. The trial deck could call the procedure "advisor" to present the situation derived from random circumstances plague, rat infestation, and weather. The trial deck could call the procedure "king", so the command on the console window would be king sell 20 or king buy 50. This have the advantage of looking as a typical English sentence: subject verb object. In a loop, the king procedure calls on the advisor procedure, which presents a new situation. The king wins or loses based on his responses to the random situation. The game can be closed after a certain number of situation trials by a limiting statement in the advisor procedure. The major subroutines or procedures were diagramed with TKpaint in the flowchart below. Those interested in flowcharting programs should be able to load the flowchart file into TKpaint or else load the file into eTCL with a few canvas display statements.

There are limits on the King for winning the game. The King starts out with 1000 barleyfields and 1000 measures of grain. Each year a census is taken of the planted fields, grain in storage, and inhabitants. The king has effectively two degrees of freedom. 1) the king may either buy or sell barleyfields or, 2) the king may either buy or sell measures of grain. In terms of physics problems, the King, land, and grain are part of a three body problem or three corner problem. Like sitting on a see-saw with three planks, the King is counterbalanced by the stored grain and planted land. Various disasters to the stored grain and planted land operate inversely to the fortunes of the Kingdom. In the internal program, the chances of disaster are carefully set so the King will win in about 1 in 5 sessions. With the random factors set now, the King has about a 20 percent chance of winning and a corresponding 80 percent chance of losing.

The advisor role is part serious helper and part jester. The advisor subroutine presents the results of the census and accounting for the kingdom, together with predictions of weather. The advsor may report various disasters like rat infestation or plague. The advisor has a fairly detailed report of situation and previous years for the king's strategy, when the console report is opened. Only a short advisor gist can be included in the advisor display. Game is halted after 5 years, count > 5, and estimate whether winner conditions are set. Winner is declared if either barleyfields are greater than N1 ( 500) or barley measures are greater than N2 ( 500). A conservative approach as in selling land or buying little land does not work too well, as chances of plague or rat infestation will fall out to ruin the conservative player. Also, staying put with zero buy or sell is not allowed in the game, but a small ante of buy 1 land is allowed. An aggressive approach against bad odds ( called going for broke in Las Vegas) is buying large amounts of land each year and sometimes wins.

The calculation subroutine is the workhorse for creating the random situation and disasters in the kingdom using flag variables. This subroutine makes use of what were called logic condition flags in large Fortran programs. The condition flags are variables with binary values of zero for no or one for positive yes (0,1). In the calculation subroutine, the conditions for the disasters of plague, rat infestation, and starvation are set as 0 or 1 flags. The disaster effects and land prices for each year are estimated from rand() expressions. Later in the subroutine, the flag conditions are used in the calculations for loss of inhabitants and loss of stored grain. For the example code with flag variables below, the rand() statements set a 15 percent chance of rat infestation for the year. These rand() statements are similar to the rand() statements used in the Random Walk Equation Slot Calculator Example.

Once the flag variable for rat infestation is set positive (1), the potential loss of grain in rat_liters for the year is estimated from a random calculation. Notice the potential grain loss for the year is calculated independent of whether the infestation flag is yes or no (0 or 1). Only in the final calculation of grain stores is the loss of grain subtracted, since final grain equals total grain minus ( loss of grain*scale_factor*flag(1) ). The effect is cosmetic, but the flags keep confusion and gritty details out of the final accounting statements. Once the flags are set, the flags can be reported and evaluated at all subsequent points in the subroutine. The flags can even be sent outside the subroutine with possible global statements as, global plague_this_year rat_infest_this_year. In executive decisions, potential loss must be a factor. For example, if the kingdom needs 100 grain liters, then perhaps the order should be grain requirement plus abs potential loss or additional planted fields to assure filled grain bins.

On the clay tablets from the kingdom of UrIII (Sumer circa 2300 to 2400 BCE), the issues from UrIII accounts have some interesting parallels to the Game Kingdom of Strategy. Over a period of several generations in UrIII, the ratio of fallow fields to total fields went from the traditional 50 per cent fallow fields to probably 30 to 20 percent fallow fields. In terms of yearly ratios, the Sumerians went from 1/2 fallow years, (1 of 2) years or (fallow year/(total years)) to possible range of 1/3 to 1/5 fallow years. Also, the recorded barley yield went down probably due to fields salting up. A lot of this evidence is anecdotal; overseers reporting on a group of fields in the lucky clay tablets that survived. Clearly the Kingdom of UrIII was entering a long period of agricultural stress during the last recorded years (circa 2400 BCE).

For comparison, the Hebrew records in the Torah represent a later era and country (Israel circa 650 BCE). In the Torah, the traditional 1 year of fallow in seven years for a field is another peg point (1/7). From the decree of the King Shulgi, the grain harvest in Sumer was taxed at 50 percent to the King (ie. taxes paid in grain). In the Torah, the traditional temple tax was 10 percent (circa 650 BCE), but not sure about the total Hebrew taxes on the inhabitants. However, it is a fair statement that the barley field lands were overtaxed in the last years of UrIII, if not the inhabitants.

Returning to the safer ground of the Game Kingdom of Strategy, it might be worthwhile to open a tax window or input window of fallow field ratios. If the predominant taxes are paid in grain or kind (like Sumer), high grain taxes or low fallow ratios (inversely) would represent an equivalent drain on the grain supply. At the start of the session, a window or label on game display could be set at 1/2, 1/3, 1/5, 1/7, or 1/10 grain taxes or fallow years from the traditional values above. Then the player could go through the usual 5 year cycles and record the wins under the different ratios.

On 27Jul2010, there was a challenge posted on converting Hamurabi.bas to "modern" computer language. The turn-around from other languages (not me!) is fairly impressive. There was a Lua program posted on 28Jul2010, Java on 28Jul2010, common Lisp program on 31Jul210, and Factor program by 3Aug2010. As best of memory, the original Game Kingdom of Strategy was posted starting 1Aug2010, but a long way from completed. Basic code was fairly terse, so there has been some real hoofing on the contributions. As a fortran programmer, I remember basic envy on the basic string addition, let it$ = "be"+"so"

The Game Kingdom of Strategy was compiled on the freewrap TCL compiler for the windows pc. Also, I found a Facebook game called Farmville, with some similar features. Quite possible to add the Eliza namespace to the game. Adding Eliza will get some context sensitive analysis/quirks into the game. Refer to A simple version of Eliza. 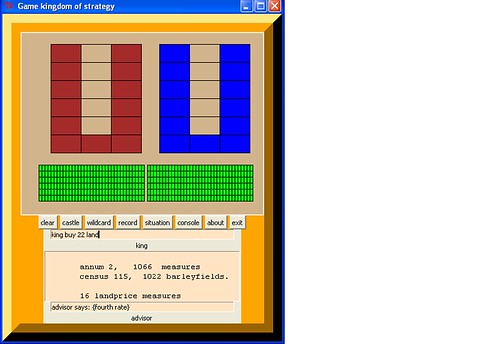 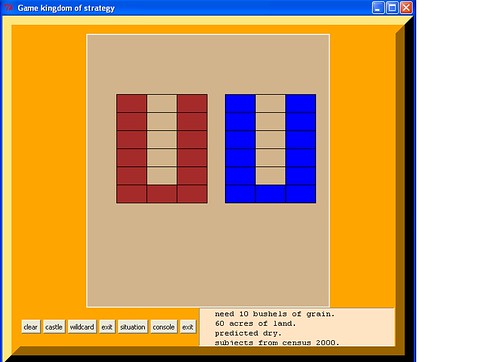 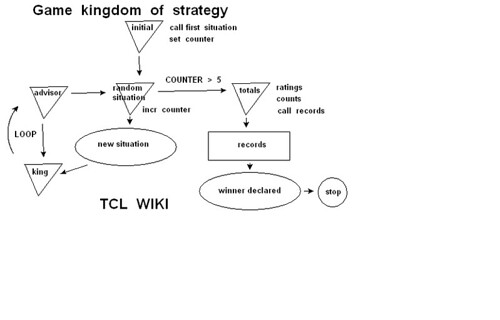 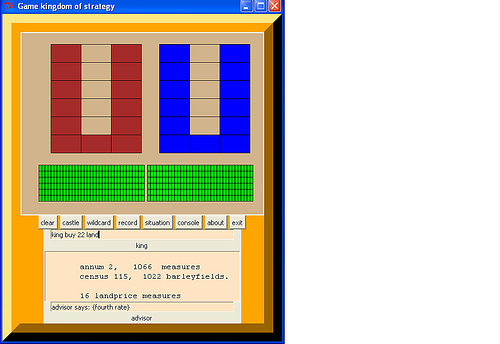 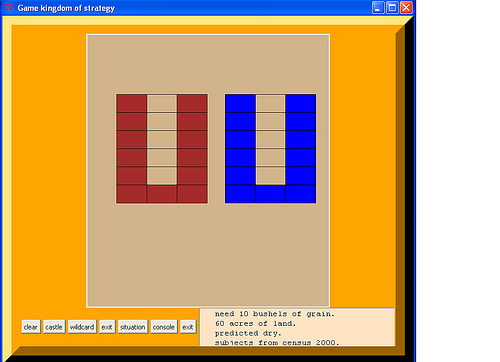 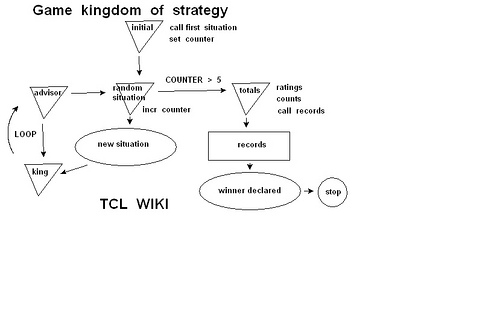 The result of that binding is that every time you move the mouse, the "wm title" subcommand is called repeatedly. To set the window title, you just need to call "wm title . title" once, not on every event update upon mouse pointer motion. gold changed to bare "wm title . title"