LED display driven by the parallel port under tcl control

Using the connection from applying the parallel port to drive a LED and read a switch from tcl, I extended the hardware a bit, nothing fancy, though I'm sure a bit more than most hobbyists will put together just like that, so I've taken time to make a schematic diagram, which makes for a nice little circuit under tcl control.

The image above is the purpose: 3 (I happened to have 3) 7 segment displays (including dot), under control of a tcl program, over a normal parallel port. Cost of the hardware, depending on how you built it, I guess 20 $/E, I don't know exactly. The idea is that when you have a running computer it doesn't need to have its screen on to display a number, or, in my case, another, self built computer can use this display unit after it has been tested on a PC.

Assuming the cable from the page I mentioned, and the driver (when needed) from the parallel port page, I used 4 8 bit latch (memories/buffers) chips, in this case from the HC series, though one may want to use ttl (ls) logic, which should work fine, too, to store the data for all the segments of the displays, and to store in this case 3 control bits, to determine which display will be listening to the data bits of the printer port.

This is the schematic diagram of the circuit I built:

I built it and tested it and with only 3 minor errors it worked easily. The diagram I made afterwards, that's maybe why I first made a little mistake in the design, which was easy to find and fix, the other problems were little (half) short circuits because of soldering wires hastily, that is not neatly.. Because the printer port is connected over resistors, that can never really hurt.

I assumed a 5 Volt supply is present, I made one from a wall wart a standard 7805 regulator chip with heat sink.

I put the display part on a experimenter's printed circuit board. The control memory is on a breadboard: 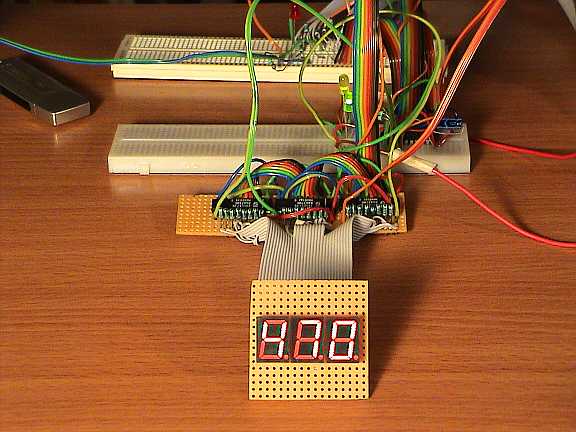 Now we can use the above mentioned driver (or use direct parallel port access for similar control) to drive our display unit by tcl control:

TV (14 Dec 2003) For those interested in the workings of the circuit, I'm starting a page on simulating latch behaviour in Bwise where also the actual circuits can be driven over bwise blocks as a simulation of the hardware in the longer run.

TV (sept 9 '05) I've lately been using programmable logic for which the following VHDL (see VHDL and Tcl page code would decode a 4 bits code to 7 segment data, except the elements are shifted and one order is different, this is for the FPGA (Xilinx/Digilent) demo board displays:

Of course the comments are optional, and this kind of code can be automatically generated by tcl code, or lets say Bwise.

I'll make a page on how to connect to hardware using the serial port connected with a fpga demo board to drive hardware in various ways, including displays via tcl commands. Lets see, I'll call it 'basic digital IO with tcl and Digilent FPGA board'

uh 13-Aug-05 - I'd like to use the LED display driven by the parallel port under tcl control. The problem is that i have no windows to test the given code and i have no clue how to *talk* to it under unix (NetBSD). I tryed:

Peter Newman 13 August 2005: As far as I know, every PC still has the system BIOS burnt into the motherboard. Which has standard (and well-documented, and easy to use,) APIs for accessing the serial and parallel, etc, ports. Accessing BIOS from DOS and assembler is a piece of cake. But I've no idea about how you do it from NetBSD. It must be possible though (surely). Even if you have to get a freeware DOS, and boot to it from a floppy.

ECS 20050814: On linux, debian at least, the first parallel port is /dev/lp0. And check if you have permissions to access it. By default it is owned by root and group lp.

Did you remember to close the channel?