The main features of alited are:

It satisfies most requirements of Tcl Editors, adding its own features.

Edited by alited are Tcl/Tk files. The C/C++ code is another target of alited, still for Tcl/Tk development only all the same.

alited facilitates the development and the maintenance of Tcl/Tk code, particularly because of the unit tree being a sort of documentation.

alited is suspected of being very good with large Tcl/Tk projects, i.e. when, in one session, you deal with 30-40-50... Tcl/Tk scripts, to say nothing of others.

It's quick at starting.

It's quick at switching projects.

It's quick at organizing Tcl/Tk code.

It's quick at navigating Tcl/Tk code.

It's quick at searching Tcl/Tk code.

It's quick at writing Tcl/Tk code.

It's quick at testing Tcl/Tk code.

It's quick at saving Tcl/Tk code.

It's quick at maintaining Tcl/Tk code.

Briefly, alited is totally quick, being at that a pure Tcl/Tk application.

Below is a screenshot of alited, just to glance at it (though a bit outdated, as well as the demos): 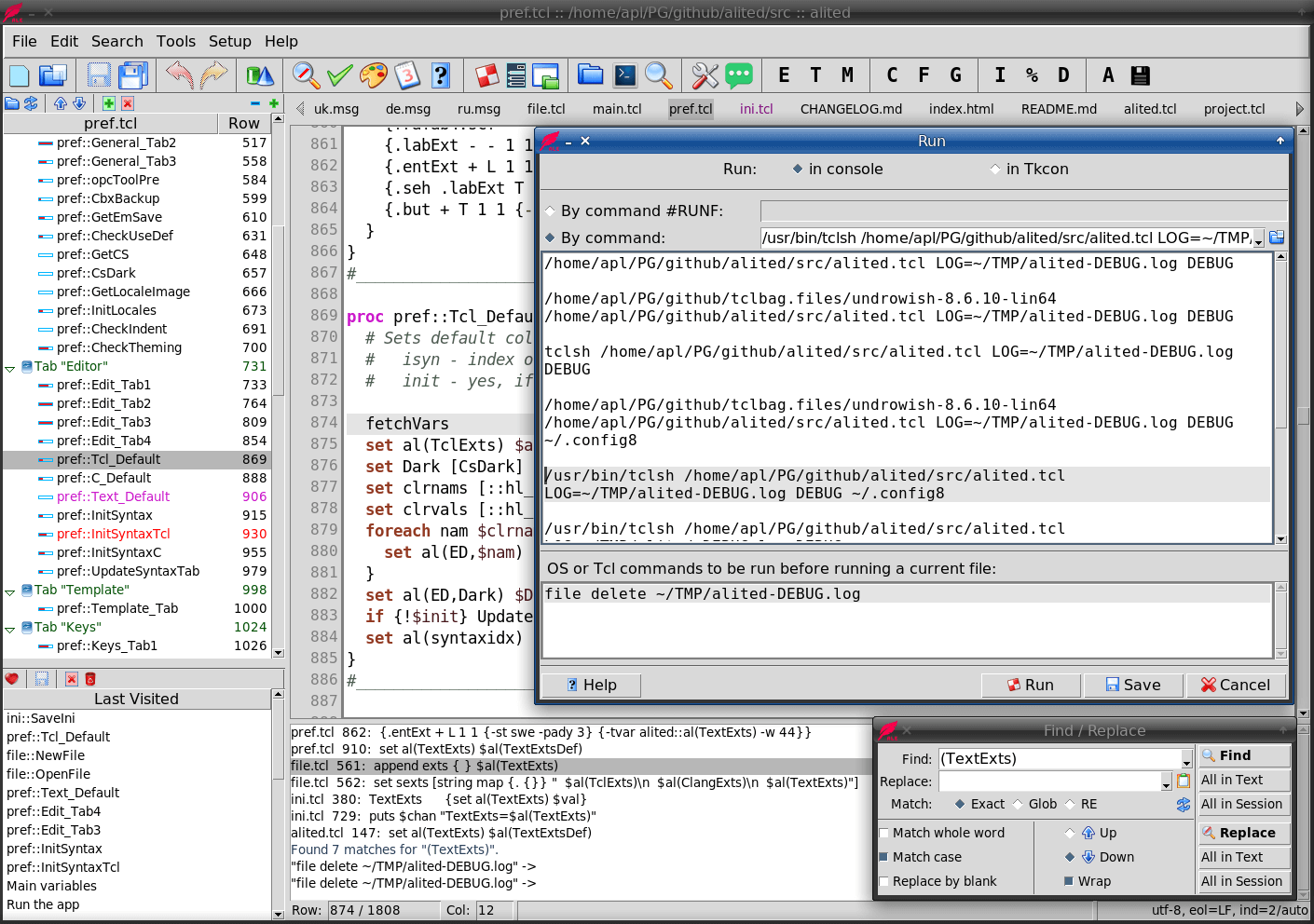 ... and its localized and themed variant: 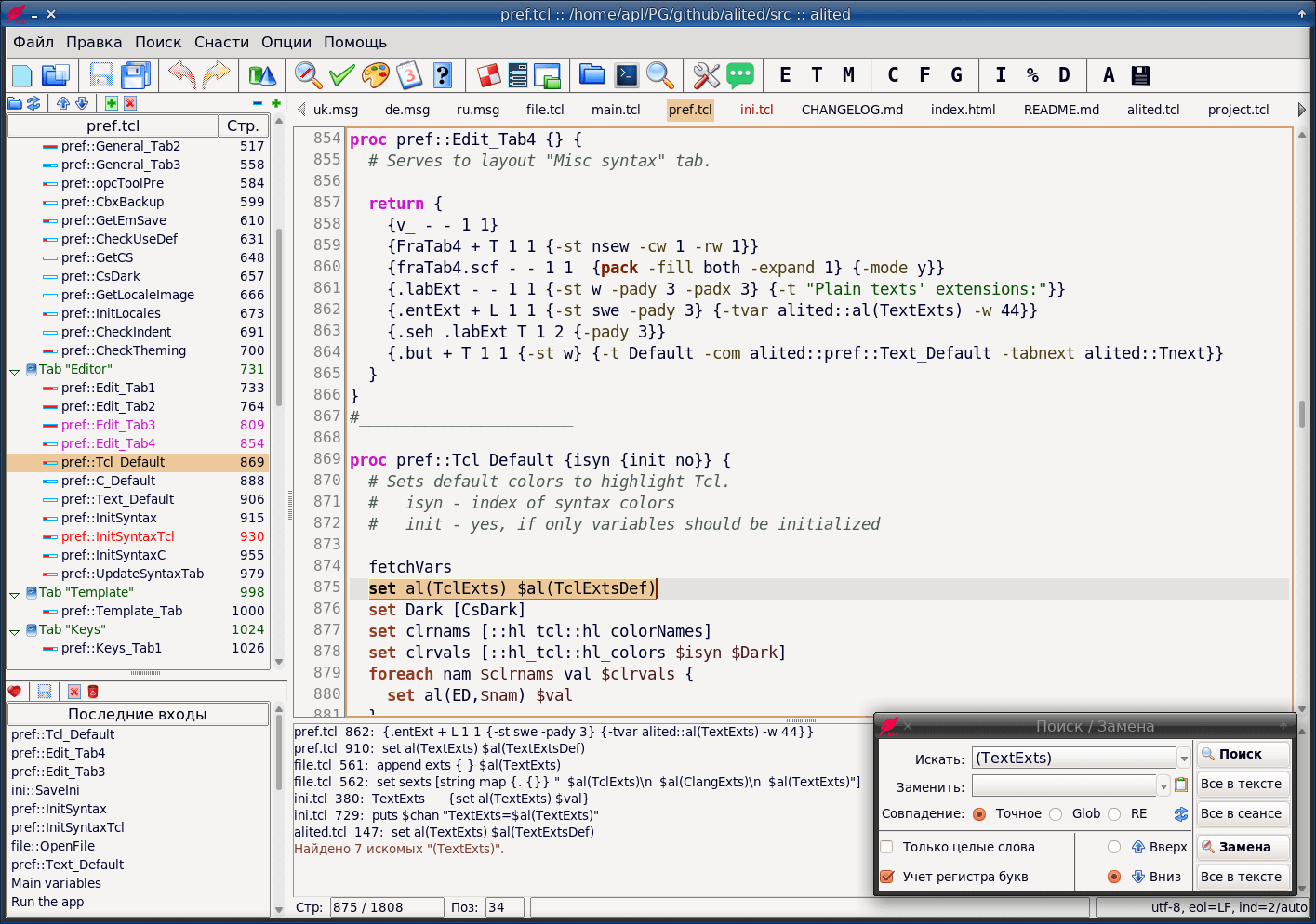 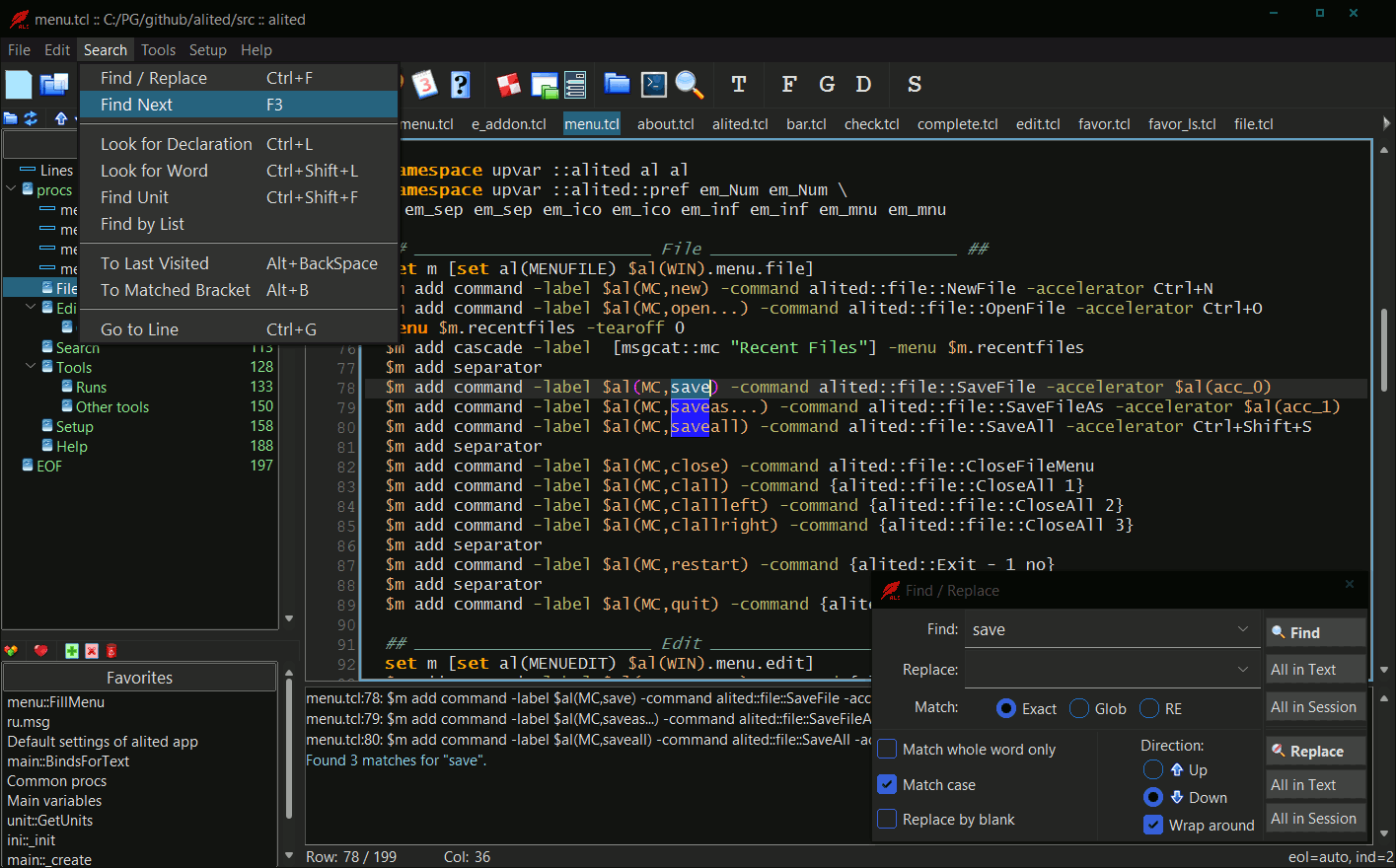 tma 2021-12-30: Under Windows 'alited' creates a directory '.config' in the users home directory with every start. Application config files should be in APPDATA=C:\Users\<UserName>\AppData\Roaming\<AppName>.

HE 2021-12-30: Alited looks promising but directly after starting I found one or better, two issues which let me directly stop my experiments.

Opening a ticket on github is only possible for registered users so this is not a possible way for me to inform the author.

Therefore, I added a Discussion section to provide what I found.

Alited opens a server socket on 127.0.0.1:51837 by using the package comm. This is not possible to change without changing the code. Neither the used port nor that the port is opened for listening.

This is an issue in a couple of cases:

This created a new text file and than closed the alited instance of foo. To make it clear, this allows everything to be executed by foo1 in context of foo what exec accepts. So you can destroy all the data foo can reach.

I don't understand the need to use comm with -listener 1 for alited. The documentation does not describe a use case for it. At least I doesn't find it.

To remote control an application to be tested, the listener mode of comm is not needed in alited.

To check for another running instance of the user also can be done in a different way. For example, assuming a local installation of the user with a lock file.

Perhaps one can explain the reason for using comm in listener mode?

Happy New Year for all of you!

Hopefully, in the upcoming 2022 Bill (or anyone who'd be after him) will not change his mind and the Roaming directory will not turn to some RoamingNeverSayNever.

alited might finely do without the starting question on .config, still it's one of its nice features - to have as much configuration directories as you need. Somewhere in the docs I mention this, it seems to be First start section.

Starting from v1.3.0, alited remembers the last used configuration directory, so that no need to pass it alited as its first argument. And no happy year similar to this one.

Why don't register in Github? Making so nice analysis on comm and two instances of alited - and so averting from Github? The Git and Github aren't wild beasts, they don't bite:) Still the issues of Github would allow guys to get the troubles immediately on the mail, the feature alas they have not with Wiki's Comments and Chiselapp's Tickets.

That said, alited is more about Tcl/Tk development than those entourage things. The alited is better than Geany and TKE. Imho much better. You might see it in its demos .

Thanks for the fast answer. That means at least that you now knows about the security issue in alited. So, my way worked even without to be registered in Github.

By the way, Github is software and it can't bite without hardware. So I'm pretty sure before your comment that Github don't byte ;-)But, I don't want to register in all the different platforms only to open a ticket. At the end I have to remember all the accounts and passwords for one ticket every n years.

Tcl and Tk for example you can open a ticket without having an account. For sure you have to give an email address but, this is okay because it is not public shown.

And you don't need to advertise alited again. I would be more interested what you want to do with the listed cases.

As you can see I made an analysis with two instances of alited, two users and also some steps showing possibly dangerous commands. And I documented it here for all potential users. I also tried a quick search through the provided documentation why alited needs that listener port beside to find out that an instance is still running.

I can change the behavior that it would fit my needs but I can't provide you a patch for that, because I don't know why you programmed it in this way or what is the use case behind it.

And it makes no sense to create a patch to make the port configurable if the only use case is to detect a running instance of alited. Because in that case I would use a different approach.

And it makes also no sense to make a deep dive into the comm package for me. The mechanism has that possible security issue. Perhaps it can be solved by using tls and certificates. But, this is behind my current experience and far to much effort to make a foreign program running safely. I'm even not sure if there is an easy way by using sockets.

Keep in mind that I simply wanted to try alited.

Okay, let the port be a preference option, its empty value would mean no watching it and multiple aliteds allowed to be run. By default, its combobox value will be empty.

Thank you for your remarks. If you don't mind I'd ask you for sending me a mail with your code about the port.

As for advertising, it seems you mean my demos, probably a bit (or much, for other taste) boastful stuff. Still I think they are very good as kind of live documentation.

Without advertising here Tcl/Tk things made by tclers, this alited would be impossible, as it uses (often by a direct borrowing!) a lot of Tcl/Tk software made by others. tk_optionCascade by Richard Suchenwirth, scrolled frame by Paul Walton, ttk themes by rdbende... As well as poApps by Paul Obermeier greatly facilitating the development, baltip greatly helped by Csaba Nemethi, loupe tool inspired by Johann Oberdorfer. And so on and on.

What is the wiki if not a site to share with one's own works? It's all for Tcl/Tk's boon, not?

Though, it's probably not a best site to put questions in the hope they would be answered quickly. Some time ago I'd missed a question on my Pave, sort of geometry manager and answered it only too late :(

But mostly you are right and I've made too haste with the publishing this alited here.

During code investigation I found out that there is a parameter to use with alited which stops the check for running instances:

For sure it is better to make it other way round for safety reason. Then an unexperienced user doesn't open the listener port by accident. Therefore, I created a version which use SEND. I hope I found all occurence where NOSEND has an effect.

To make port configurable will not work in the current structure of alited because configuration is loaded after the listener port is opened. At least the configuration array ::alite::al is not filled at that time. Therefore, I not spend additional work on it.

In addition I created de locale. Only a rough translation. Some entries are still looking strange. Beside the help pages in data/help it will be possible to use alited as a German native.

I will send you all changed/new files to you by email.

SEH 2021-01-02 - I've been experimenting with alited over the holiday break, and so far I think it has a lot of potential for making it easier to comprehend and work with multi-file Tcl projects. I hope more people give it a try.

I was also trying this application out and it has a lot of neat ideas , however , can it be that saving a file always asks you to confirm saving over the older version ?

Well, it was my mistake to use my own preferences for mapping "Save as" to Ctrl+S and "Save" to F2, with Ctrl+S being a standard de facto for "Save".

I'll change this in v1.3.6, its intermediate variant is already present in chiselapp , with keys remapped.

That said, you can do the remapping youself, using "Setup / Preferences / Keys" settings.